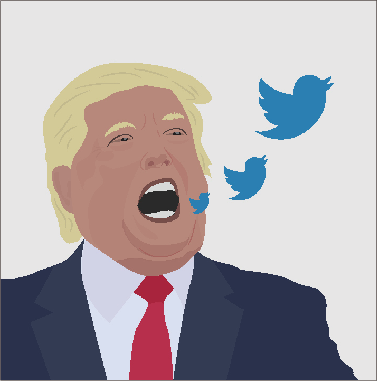 President Donald Trump has spent a lot of time in the spotlight during his early tenure in the oval office.  His role on social media has arguably stirred more controversy than his policy decisions at times.

The president has been active on his social media accounts during his time in office. In particular, his Twitter account has garnered much attention — as well as a sudden absence from the social media platform on Nov. 2.

On that evening, a rogue customer support worker for Twitter disabled the president’s account on her last day on the job, according to the New York Times. Trump’s account was down for 11 minutes, and, according to the report, the incident sent users of the website into an uproar.

This former Twitter employee felt strongly about Trump’s use of social media, and some research indicates she is not alone.

According to an NBC poll taken in August, 66 percent of Americans disapprove of the president’s Twitter usage. Do the national beliefs of Americans align with those in Wilkes-Barre?

The feelings of students seem to be generally consistent. One resounding theme remained prevalent: they think the president should spend less time on Twitter.

Subject matter has also come into discussion when talking about how president Trump goes about using his twitter.

“I don’t think he should posting everything that happens in the White House. Like, let that go,” said Tyler Martz.

Twitter has only been around for 12 years, and Trump is the second president to hold office during the rise of social media. When attempting to compare others who have held the position, this only leaves President Obama as a source.

The rate of usage  between the two is very different. President Obama would tweet far less often than Trump, using the platform every few days, compared to Trump tweeting multiple times in one day.

“I think he used social media a little too much. He should address the public through other media outlets,”  said Nick Rhinesmith.

There are those who think with the right useage, the president can use twitter as an effective medium for communication.

“I think it’s a good way to stay in touch with the younger generation,” said Keith Allen.

This is could be a strong possibility. According to a 2015 Pew Research Center study, 32 percent of 18 through 29 year olds use the social media site.

“I think Trump uses social media as an effective tool to display his opinion … He’s very raw, very true, he’s a no B.S kind of guy, and he puts his foot down and he sticks to his guns,” said Jonathan Bender.

While both expressed this sentiment, they also said they thought he was on the platform too much.

“At the same time he can be using it the wrong way like he is,” Allen expressed.

Even citizens who voted for him had some remarks about his use.

“Some negative, he doesn’t always refrain from what he really means,” said Bender later on.

“Twitter use by the president is obviously novel but extremely dangerous and damaging, because presidential statements often times have the force of policy,” Wilkes assistant professor of history Jonathan Kuiken said.

Trump’s use of Twitter is unprecedented, and time will tell whether it will continue to be used in such a way by future White House occupants.