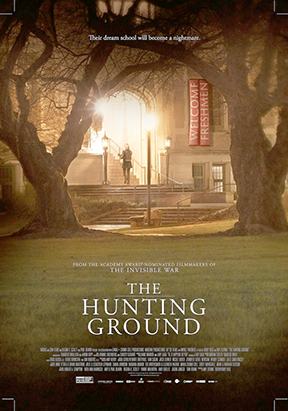 On Oct. 20, Student Affairs hosted a viewing of the award winning documentary “The Hunting Ground” to bring awareness to sexual assault on university and college campuses.

Dean of Student Development Philip Ruthkosky and Elizabeth Swantek, director of residence life, presented the film to educate students on the cover up of sexual assault on campuses by colleges and universities. Ruthkosky described the institutional phenomena as “a fight between the safety of students and the reputation of the university.”

“The Hunting Ground,” directed by Kirby Dick, is a documentary featuring a variety of college students sharing their struggle with the process of reporting sexual assault on their respective college campuses. The film specifically follows two students and their protest of unfair treatment of sexual assault victims by college administrators through Title IX, a federal law that prohibits discrimination on basis of sex.

The film includes an array of statistics that are meant to stun the viewer. The film claims, “88% of women who are raped on college or university campuses do not report it,” due to colleges condemning the persecution of the assailants.

“I want you to think, what can I do as a student?” Ruthkosky stated, wanting students to use the film to further educate themselves on learning the signs of a victim of sexual assault and becoming an engaged bystander.

Through education, Ruthkosky believes that sexual assault will become easier to report on Wilkes campus.

For more information on the documentary and its message, visit www.thehuntinggroundfilm.com. The film can be rented or bought on Amazon or in the iTunes Store.

To learn more about sexual assault on campus, check page 3.