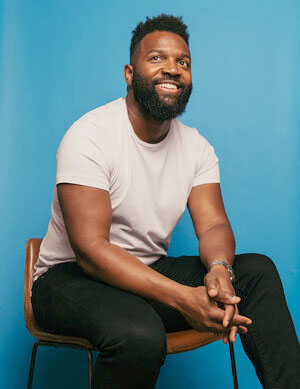 Baratunde Thurston is an Emmy-nominated activist, comedian, producer and writer who hosts a podcast entitled, “How To Citizen with Baratunde.” On Feb. 25, he held a guest lecture for Wilkes students and staff to discuss the discrimination that has come to a head during the COVID-19 pandemic.

The Student Development Office, with the help of their Mega Councils, hosted “An Evening With Baratunde Thurston” on Feb. 25. Baratunde Thurston is an Emmy-nominated activist, comedian, producer and writer who has worked for the Onion, produced for “The Daily Show” and advised the Obama White House. Thurston is also the executive producer and host of “How To Citizen with Baratunde,” a podcast named one of Apple’s favorites of 2020.

Thurston is most notably known for his 2019 TED Talk, “How to deconstruct racism, one headline at a time,” which has been critically acclaimed and regarded by MSNBC’s Brian Williams as “the best TED Talk of all time.” In his TED Talk, which has now accumulated over 1.2 million views on YouTube, Thurston discusses how news headlines have contributed to perpetuating racist narratives. He does so through a few methods, but most notably by taking the audience through a process of breaking down headlines into sentence structure, English-class-style.

“What I found was a process to break down the headline and understand the consistent layers in each one: a subject takes an action against a target engaged in some activity, so that ‘White Woman Calls Police On Eight-Year-Old Black Girl’ is the same as ‘White Man Calls Police On Black Woman Using Neighborhood Pool’ is the same as ‘Woman Calls Cops On Black Oregon Lawmaker Campaigning In Her District.’ They’re the same. Diagramming the sentences allowed me to diagram the white supremacy which allowed such sentences to be true, and I will pause to define my terms,” Thurston said.

Thurston continued along this line of thought to expertly come to a grim but succinct conclusion.

“I am here because I was loved and invested in and protected and lucky, because I went to the right schools, I’m semi-famous, mostly happy, meditate twice a day, and yet, I walk around in fear, because I know that someone seeing me as a threat can become a threat to my life, and I am tired. I am tired of carrying this invisible burden of other people’s fears, and many of us are, and we shouldn’t have to, because we can change this,” said Thurston. “Because we can change the action, which changes the story, which changes the system that allows those stories to happen. Systems are just collective stories we all buy into. When we change them, we write a better reality for us all to be a part of. I am asking us to use our power to choose. I am asking us to level up.”

Dr. Philip Ruthkosky, associate dean of student affairs, was especially impressed by Thurston’s TED Talk and recommended Thurston as a guest for the Wilkes University students and staff.

“I was first introduced to (Thurston) when he became a regularly featured guest on a segment for a cable news program,” Ruthkosky said. “Impressed by his style and acumen, I tuned in to his TED Talks and podcast titled, ‘How To Citizen.’ We shared his TED Talks with leaders from Student Government and Mega Councils shortly thereafter, and they were excited about collaborating on an event that would provide an opportunity for meaningful dialogue related to diversity and inclusion.”

Melissa Howells, director of student development, attested to the ease of the process of getting in touch with Thurston and his team.

“Mr. Thurston makes it very easy to reach out to him and his team. There is a ‘contact’ option on his website baratunde.com. His team from Creative Artist Agency was extremely quick to respond once we reached out, making the process easy and efficient,” Howells said.

The event began at 7 p.m. sharp, with Thurston being introduced by Howells and Wilkes University senior Nataliya Scarantino. Thurston eloquently explained the way in which the past year has been difficult, most especially for black people, and exactly why. COVID-19 highlighted all of the faults and foibles of every system in America, and showed how BIPOC (Black, Indigenous and people of color) stood to lose everything from it.

From Native American reservations to lower income — and consequently — predominantly minority neighborhoods, COVID-19 hit especially hard. Because of this, other disparities began to come to a head, including the wage gap, food insecurity, unemployment rates and police brutality — and they all pointed to one thing: not coincidence, but discrimination.

However, there is work that can be done to fight back against these issues.

“We’ve barely scratched the surface of all the things that we could do if we unleashed the potential of everyone in this country,” said Thurston.

Howells believed that Thurston went above and beyond all expectations for the event.

“Knowing that (Thurston) was an engaging speaker, we were confident that people would take away a ton from his address and enjoy his satire,” Howells said. “But when he was on-screen, it was impossible to look away, to be distracted, to not hear his words. One of his team members spoke with Dean Ruthkosky and me a few days before his keynote – (Thurston) wanted to know more about Wilkes students and the university in general. This shows me that he delivered his address with Wilkes in mind, making it unique just to us. He was just as invested in us as we were of him.”

Ruthkosky was satisfied with Thurston’s virtual visit and gave his thanks to the campus organizations for setting up the event.

“We are so pleased that Student Government and the Mega Councils made social justice a salient priority, and collaborated with Student Development to bring this event to campus.  Moving forward, we will work closely with a student advisory group to identify future speakers,” Ruthkosky said.

Keep up with Thurston by following him on all social media platforms and supporting his podcast, “How To Citizen with Baratunde.”