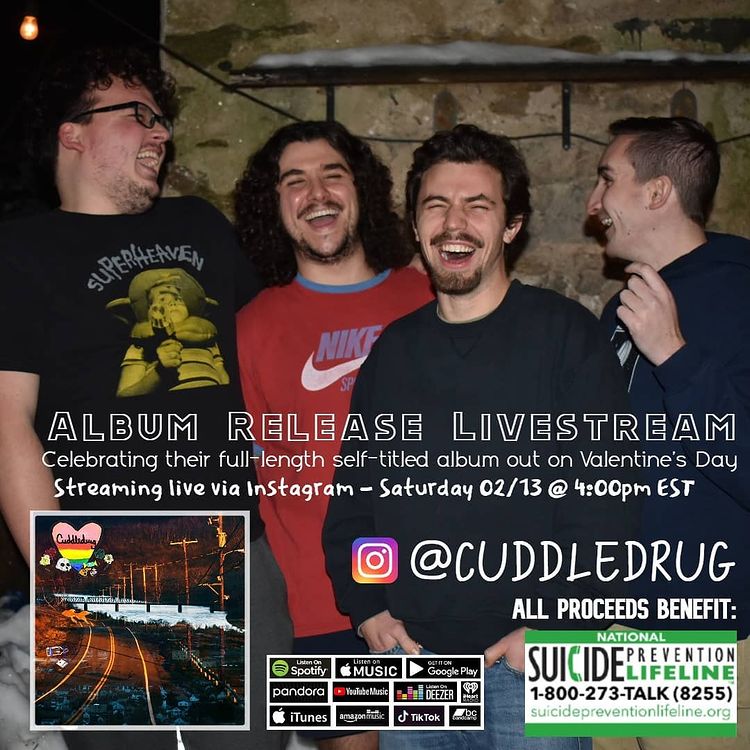 A local Wilkes alumni band, cuddledrug, has created a fundraiser to support the National Suicide Prevention Hotline. The indie alternative pop-rock group will be hosting an Instagram livestream performance of their newest album on Feb. 13 to gather donations.

In regard to donations, the group explained, “It’s all going to the National Suicide Prevention Lifeline — an organization that truly helps improve people’s mental health outcomes.”

Jolley formed the band in 2010 as a solo project, apart from his group band at the time, Ticket to Ride, in order to engage in creative artistic freedom. The name “cuddledrug” is a reference to the chemical hormone oxytocin, also known as the “love hormone,” which is released when, in the words of Jolley, “We love someone, get a hug, truly care about something, pet a dog, or donate to charity.”

After desiring to write about the things that mattered to him the most, Jolley created cuddledrug.

“I wanted to write about things that truly mattered to me and the people I cared about, so cuddledrug was born,” Jolley said.

The band will be raffling off the paintings that Sutphen created in honor of the event on their Bandcamp page (https://cuddledrug.bandcamp.com/merch). The winners of the raffle will be chosen during the Saturday livestream, which will begin at 4 p.m. on their Instagram account @cuddledrug.

The livestream will be broadcast from the band’s practice space in Philadelphia, where they will play a collection of their newest songs and also some “oldies but goodies.”

“This new album is our full-length, self-titled LP written to eulogize our friend Gage in an uplifting, hopeful, positive and healthy way. It sends a strong message of mental health awareness, advocacy and suicide prevention,” said cuddledrug.

In mourning of his friend Gage, Jolley explained how close they were.

“We shared a lot about our mental health struggles, especially over the last year,” Jolley said. “He was married to my best friend Ashton Zanecki, who contributed all the album artwork photography.”

Even when Gage and Zanecki lived in Pittsburgh, Jolley would often travel to visit them.

“Gage was such a kind and caring soul, but also someone who was never afraid to have fun,” Jolley said. “He always supported our music and covered his jeep in our stickers.”

Jolley and Gage’s friendship was also spiritual, with their birthdays being only one day apart.

“I’ll miss him forever,” Jolley said. “He taught me so much.”

According to cuddledrug, none of the songs are directly written about Gage, and instead focus on their perspectives of processing his death by articulating messages about mental health, awareness, advocacy and suicide prevention.

Zanecki is also credited with taking the photographs and compiling the layout of their album. His marriage to Gage brought unity between the two groups, forming a collaboration on their important album.

“Ashton’s photographic collage is intended to convey a sense of comfortable confusion,” Jolley said. “It’s hard to determine where one photo ends and the next begins. This is indicative of what we have been feeling.”

Sutphen created the painted elements on the album’s artwork.

In addition to mourning their friend Gage, Jolley and Heinz are also remembering the late Dr. Steven Thomas from the Wilkes University Chorus and Chamber Singers.

“Dr. Thomas was super close with us and helped us bring our vocal performances and cuddledrug’s music to the next level,” Jolley said. “We mourn him with this album as well and we miss him every day.”

For Jolley, it is not the first time he has hosted a charity fundraiser.

When Jolley was a student, he booked over 200 benefit food drive shows in support of the Domestic Violence Centers of Wilkes-Barre with the help of the Courtdale United Methodist Church.

In 2014, he booked a show in the Henry Student Center at Wilkes University in order to raise awareness for underage drinking during the annual Big Event. After a few hundred people showed up, ate all of the pizza and started a mosh pit, public safety had to shut the event down — nevertheless, Jolley’s efforts were still successful.

The band also handled an aluminum can drive for Geisinger’s Ronald McDonald House in Danville.

“My truck was always filled with gross bags of cans, but it was worth it,” said Jolley, in reflection of this charity event.

In recent times, the band has been active in raising awareness for causes such as Black Lives Matter, with an emphasis on “being careful only to help amplify POC voices instead of shouting louder.”

“My bands have always tried our best to give back to the community,” Jolley said. “I always felt weird attracting attention to the music I would make without redirecting that attention somewhere more meaningful or progressive.”

In anticipation of this weekend’s fundraiser, Jolley also said, “We’re very grateful for everyone that is helping us raise money and awareness for the lifeline.”

The National Suicide Prevention Lifeline is 24/7, free to call and provides support to anyone in need of care over the phone.

According to the National Suicide Prevention Lifeline, there are many risk factors that make it more likely for someone to “consider, attempt, or die by suicide.” These factors include:

Mental disorders, particularly mood disorders, schizophrenia, anxiety disorders, and certain personality disorders
Alcohol and other substance use disorders
Hopelessness
Impulsive and/or aggressive tendencies
History of trauma or abuse
Major physical illnesses
Previous suicide attempt(s)
Family history of suicide
Job or financial loss
Loss of relationship(s)
Easy access to lethal means
Local clusters of suicide
Lack of social support and sense of isolation
Stigma associated with asking for help
Lack of healthcare, especially mental health and substance abuse treatment
Cultural and religious beliefs, such as the belief that suicide is a noble resolution of a personal dilemma
Exposure to others who have died by suicide (in real life or via the media and Internet)

If you are suffering from any of these risk factors and are considering suicide, please call the National Suicide Prevention Hotline at 800-273-8255. The lifeline is available in both English and Spanish.