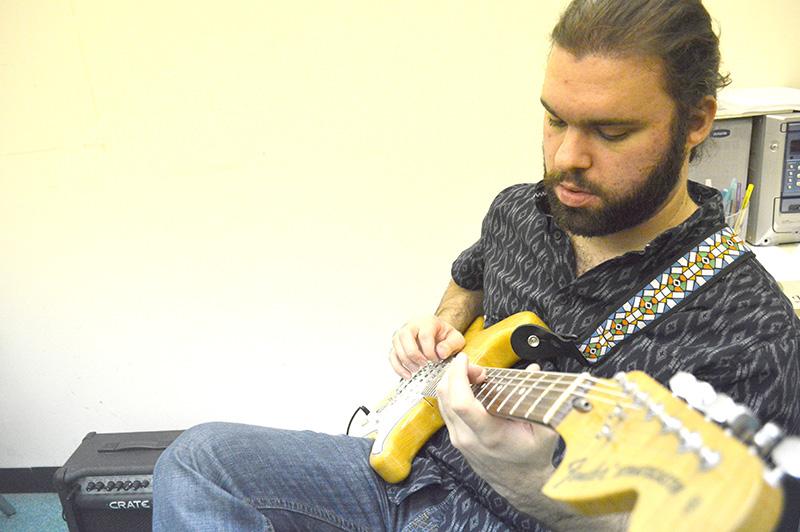 “Music doesn’t lie,” according to the famed guitarist Jimi Hendrix. “If there is something that needs to be changed in this world, then it can only happen through music.”

Learning how to play an instrument is a way for people to think, relax, make a change and enjoy the secret language behind the  notes. If you have ever thought about learning how to play  guitar, Vincent Insalaco is the teacher to take a class from at Wilkes University.

Insalaco started playing the guitar at eight years old. When he turned 15, he began taking classical guitar lessons at the university from George Sprenglemeyer.

“I just always wanted to play,” Insalaco said. “My parents weren’t really musicians but they loved music. My dad would always have the rock and roll station on whenever we went anywhere.”

Insalaco admits that he begged his parents for guitar lessons ever since he could speak.

Since the fall of 2008, Insalaco has been giving private guitar lessons to Wilkes students and also teaches children through the Conservatory. By signing up for the Music 100 course, students receive private lessons from Insalaco.

When registering for one credit, a student gets a half-hour lesson from him once a week. By registering for two music credits, students are provided with a one-hour private lesson a week.

Insalaco said that the curriculum for his course is based on what the student is interested in learning.

As a guitar teacher, Insalaco finds it very rewarding seeing the progress of his students. He said that it is also a great stress relief for them and a break from the heavy college curriculum.

One of his former students took lessons from him in high school. Insalaco said she came into one lesson in particular after having a really rough day at school and he showed her something new on the guitar.

“She really took to it, and she got really happy and said (she was) going to go home and not cry,” Insalaco said. He feels that turning someone’s day around and helping them in a small way is very rewarding.

Insalaco teaches students of all ages. His youngest student is five years old and his oldest is in their sixties.

“Always keep learning and always try to keep taking lessons from someone,” Insalaco said. “The more you think you know the more you realize you don’t. Always keep working at it.”

Insalaco has been playing guitar for 21 years and says he enjoys playing jazz and rock and roll music the most. He also fronts a band,  Mobile Meth Lab Explosion, with a former guitar student, Mike Kapolka.

In addition to guitar, he also plays bass, banjo, mandolin, ukulele and piano.

Aside from music, Insalaco also hosts a trivia night on Thursday evenings at 9 p.m. at Bart and Urby’s. There are seven questions per round and a total of five rounds for the night. A different prize is awarded to the winner of each round with the final grand prize being a $75 cash award.

The trivia night is free to play for anyone 21 years or older. There are a variety of trivia questions ranging from movies, history, current events and much more.

On other nights during the week, Insalaco can be found playing guitar or helping with the sound at Bart and Urby’s.

For more information on the lessons offered at Wilkes, potential students are asked to contact Vincent Insalaco via e-mail, at [email protected]