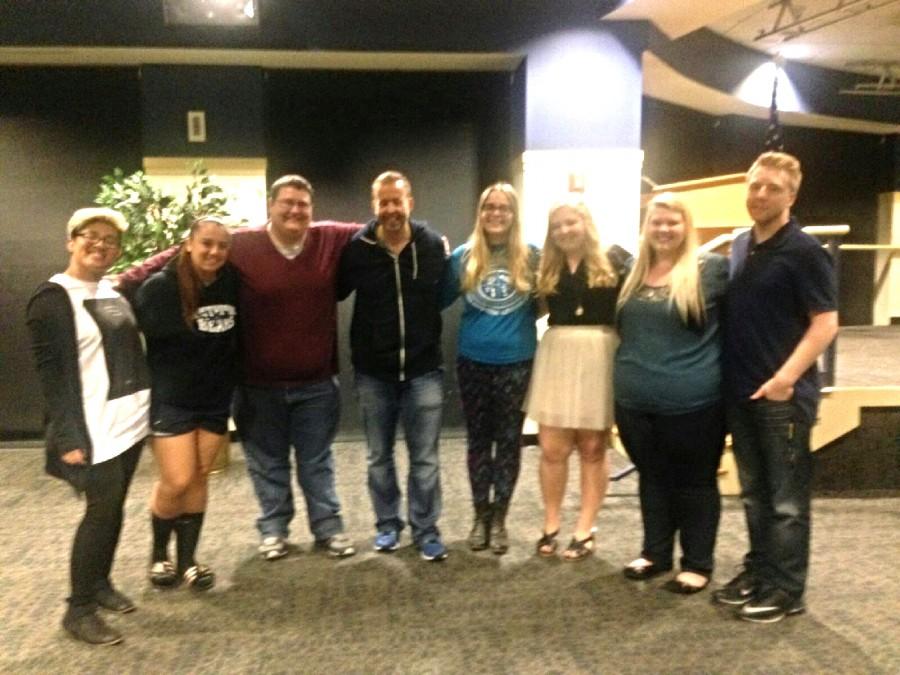 “Don’t believe the shit in life that says you’re incomplete,” said Kyle Cease, a transformational comedian who performed at Wilkes University on Oct. 8.

The night of laughs took place in the Henry Student Center Ballroom and was hosted by Wilkes University’s Programming Board.

The night featured Cease doing his style of standup—a combination of hilarity and inspiration.

Comedy Central ranked Cease’s act as number one on its Standup Showdown in 2009.

The comedian started stand up at the age of 12. If Cease looks familiar, it may be because he has also acted in the movies “10 Things I Hate About You” and “Not Another Teen Movie.” Cease speaks of transformation through the art of learning to let go.

Students who attended the event seemed to connect with Cease’s message and delivery style.

One student who “scheduled fun,” as Cease worded it, particularly enjoyed the night with Cease. Brianna Nutaitis, a nursing major, found a bit of herself within the comedy routine.

“I related to almost everything he talked about and I was always cheering along,” Nutaitis said.

“He used his own experiences and comedic aspects in a way that truly resonated with not only me, but I believe everyone who came.”

Cease walked the audience through his major life events, triumphs and struggles. He categorized different parts of his life into jokes with meaning. Much of his time on stage was talking about how he overcame doubts from his friends and people around him.

“You have total control of your life and a lot of people don’t want you to know that,” he said.

Cease shared a time in his life that he was at an all time low, in a depression that spiraled into crippling anxiety. He spoke about how one could get past such lows and see the positive, bright side of life.

“Do you know why we are scared to leave something?” Cease asked.

“Because your mind could measure what you will lose, but it could never measure what it will gain. Your mind is literally tricking you.”

It was advice that made what was supposed to be an hour stand up set turn into two. After an hour Cease asked for a time check but also asked to keep going. With approval from the audience, he continued to relay his messages.

“I think students took away his deepest and most true message, which is to be 100 percent genuinely who you are,” Valerie Woods, WUPB president said.

“The one thing that I took away from it (his set) was to not take anything too seriously,” Nutaitis said. “I feel like I’ve been hyping up things in my life that don’t need my time.”

Cease focused on this concept of “time” as a major theme throughout the evening. Although many would say his stand up is motivational, Cease believes that “motivation is bullshit.”

“Motivation is when you go ‘I’m going to make this thing happen; I’ll be the best.’ That only happens when you think that ‘thing’ you’re going to get will complete you. Meaning that you are saying whenever you want something you are incomplete.”

This thought especially motivated students to reflect on their lives.

“Goal setting and having the motivation to achieve a goal has always been a huge worry that I’ve had. Now I’m looking at these types of things differently and in a more open way,” Nutaitis said.

The one thing that Cease did ask of the audience was to try and follow along with what he was saying. He did not expect the audience to accept his words as truth, but he requested that they at least put though into his message.

“The reason I wanted to be the president of WUPB is because I wanted to bring events to campus like this. Wilkes has never had a transformational comedian, and I’m sure many students were hesitant to come to something they’ve never heard of,” Woods said. “The sole purpose for why we are here, at Wilkes University, is to learn and figure out who we are and what our goals are. That’s exactly what bringing Kyle Cease to campus did.”

For more information about Cease and his upcoming shows go to:  kylecease.com