Mansions and Millionaires: The Rich History of Wilkes 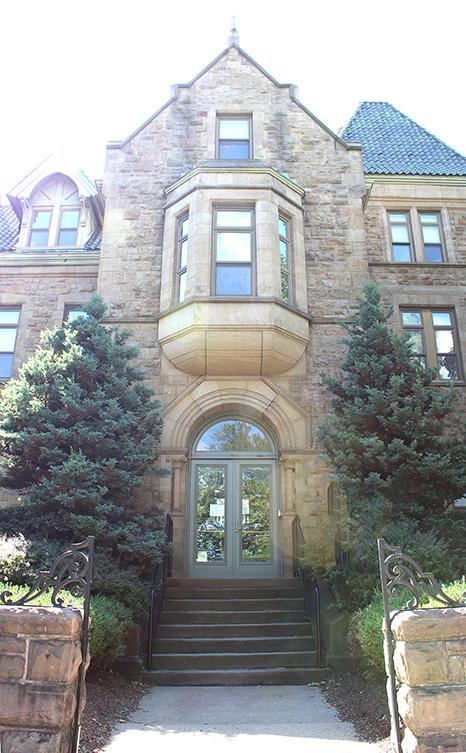 Wilkes University is surrounded by history and the mansions of millionaires that have passed long ago.

Those who are new to Wilkes-Barre may be surprised by the number of mansions and the 18th, 19th and 20th century architecture surrounding Wilkes University. Many of the more than 60 buildings integral to the everyday life of a Colonel are mansions preserved in the time they were built.

While a few contemporary buildings provide students with the updated settings needed to thrive in their fields, these buildings share the greenway with several more traditional learning environments. Kirby Hall, home of the English department, was purchased by its namesake in 1905 while Kirby’s business partner, Frederick J. Weckesser, resided just across campus on South Franklin Street.

Weckesser Hall, built between 1914 and 1916, is now home to the offices of the president and administration. Weckesser and Kirby are responsible for the F. W. Woolworth Company, known as one of the earliest department stores in the country.

Dr. Paul Adams, vice president of student affairs, holds his office from the first floor of Weckesser Hall. The dean maintains that a blend of historic mansions and newly constructed buildings are an asset to aesthetics and to the modern learning environment.

“This architectural mix has created a unique campus by melding state-of-the-art learning spaces with historic properties that complement the cityscape and Wilkes-Barre’s historic past,” Adams said.

Maintaining the mansion-style buildings as department headquarters has not been without issues, however. The lack of usable space in many of the mansions has left departments scattered across campus.

“A consequence of re-purposing these mansions, and other acquired properties in the Wilkes neighborhood, is that not all departments and related administrative offices have been able to co-locate and enjoy the benefits of collaboration and functional convenience that comes with [being close],” Adams said.

Under the administration’s ‘Gateway to the Future’ strategic plan, the university has begun creating new space or renovating existing structures to consolidate academic departments into one location. The Department of Communication Studies and the Department of Education are expected to gain new homes, respectively, while the Nursing Department and the Jay S. Sidhu School of Business and Leadership have recently undergone their move to centralized locations.

Adams forecasts that these strategic moves will help “to improve service and convenience for students.”

First-year students may live in mansions, including Catlin Hall, built in 1843, or Schiowitz Hall, built in 1899, among others. Slocum Hall was built in the 1890s and has been named by the University in honor of Frances Slocum, a woman who was kidnapped in 1778 from her family farm in Wilkes-Barre at the age of five and spent the rest of her life as a Native American.

As one might expect, students living in these halls tend to feel at home moving into the less-than-modern dwellings. The mansion living helps to set Wilkes apart from other institutes for higher education.

“There is a charm and sense of community that comes from living in the mansions,” Adams said.

While students may be charmed when they first move in, that feeling may be replaced with a sense of regret soon to follow.

“The mansions usually don’t provide the amenities that many new students seek,” the dean added. “While the rooms are larger and each has it own ‘character’, often students prefer living arrangements in which they better access to shower, sink and toilet facilities and where wireless signals flow easily. Often the ratios of students per bathroom are higher in some of the older mansions and the thick walls can block wireless signals.”

“Also, the older homes present challenges of deferred maintenance. New students often want to meet as many people as they can during their first semester, and the mansions (some as small as 11) don’t necessarily provide the same access to their peer group does an Evans, Lawrence Roth or Pearsall Halls”.

A walk down Franklin Street and many of the others surrounding campus provide a glimpse back in time to Wilkes-Barre earliest days. While recently undergoing a major facelift, one important feature from Wilkes-Barre’s earliest days remains an integral piece to the community—the River Common.

While Wilkes-Barre began with only a few dozen families centuries ago, more than 40,000 people now call it home. As the number of people living in Wilkes-Barre rises and the modernization of the free world continues to rapidly develop, Wilkes University hopes to remain as an eyeglass into the area’s rich, historical past and as a stepping point to its ever-changing future.