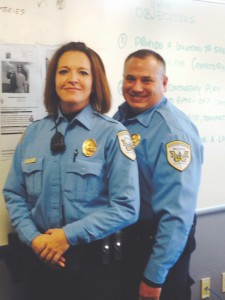 The Department of Public Safety at Wilkes University hired four new officers since last semester who bring additional skills, experience levels and passion for protecting the students on campus.

Since December, Public Safety has hired  officers Steven Bigus, Michael O’Donnell, Tori Harrison and William Dubiak. Director of Public Safety, Christopher Jagoe said the department is “real proud to have these officers on board” and looks forward to having them meet the community.

Harrison, who has been a police officer since 2012, said she was eager to work in a community-like environment in which she feels she can help people rather than the experiences of a traditional city police setting.

“I like to be able to get to know who I am dealing with,” said Harrison. “It’s close-knit here and I feel like this department is much more of a team.”

Bigus, a retired police officer for the Wilkes-Barre police force, was already very familiar with the campus community before being hired at Wilkes. While assisting public safety with training, he saw a transition within the department and wanted to be a part of it.

Bigus said he is pleased with how welcoming the faculty, staff and students have been during his first weeks at Wilkes University.

“For the first week or so, you think it’s just because you’re the new people on campus,” said Bigus. “Every day, though, you’re meeting new people and everyone has continued to be so wonderful. I really look forward to coming into work.”

Harrison, who is also the mother of a 17-year-old son, cautions students to think before they act.

“I get wanting to go out and socialize, but the most important thing right now is getting the grades and experience needed to get you through the rest of your lives,” said Harrison. “One bad decision can affect everything and you really need to think about it first.”

Harrison and Bigus both agree that the biggest challenge they have faced thus far has been dealing with the weather while on duty.

Jagoe said hiring the four new officers is only one phase in the revamping of public safety. He expressed his gratitude to President Leahy and the administration of Wilkes University for their continued dedication to the safety and well-being of all those on campus.