Watching television at night could make the hairs on your arm raise along with your heartbeat. Shows that air such as CBS’s “Criminal M 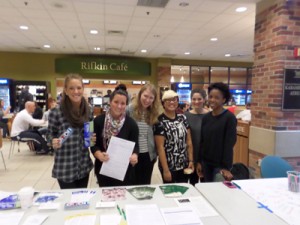 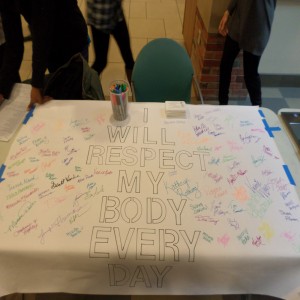 inds”, “The Following” on Fox and the newest show on ABC “Stalker” could all leave one shaking in fear.

It is the realistic thought that there are people in the world who have mental illnesses that if caught and treated most likely would have never committed such heinous crimes as depicted in those shows.

Wilkes takes the matters of student health seriously. Many clubs and organizations organized have missions around bettering the health of the campus.

One organization in particularity is Psi Chi Psychology Honors Society.

Last Thurs. Psi Chi members teamed up with the Women’s Gender Studies Department to host a table in the Henry Student Center to inform students about mental health issues and ask for a pledge of to “love your body everyday”.

College is a stressful time in one’s life where the overlapping focuses in fight for attention. It is a balancing act between staying in school, keeping good grades, having money, staying in touch with your family, having a social life along with much more that stresses college students out.

“Our main purpose today is to inform people about the struggle of mental illness at college,” senior psychology major Brooke Bishop, Psi Chi vice president said. “It is an issue everyone should pay attention to.”

On one of the tables set up were many different information fact sheets for students to take. Knowledge is power when dealing with mental health issues. One hand-out dealt with depression, which according to the American Psychological Association (APA) “depression and anxiety consistently rank as the most common mental disorders treated at college counseling centers.”

APA also reports that “an often overlooked but equally serious problem (on college campuses)  is the rising number of students struggling with eating disorders, substance abuse and self-injury.”

That is where the presence of the Women’s Gender Studies Department came into play on Thurs.

There was a banner displayed on a table where students passing could pledge to love their body.

“I think mental health is invaluable, especially for those who believe in mind over matter,” junior psychology major Allison Davis, member of Psi Chi said. “Mental health isn’t something we pay much attention to as college students. Anxiety and stress are serious problems, but we encounter them so often, the notion doesn’t even phase us anymore, it’s just a part of daily life.”

Awareness of the cause is important in the aid of recover.

Davis gives encouragement to those who struggle with health issues by saying, “Nothing lasts forever. I’ve always found getting a new perspective helps as well. Don’t be afraid to ask for help, everyone needs it at one point or another.”

To get a online mental health screening go to http://www.mentalheathscreening.org/screening/WILKES.