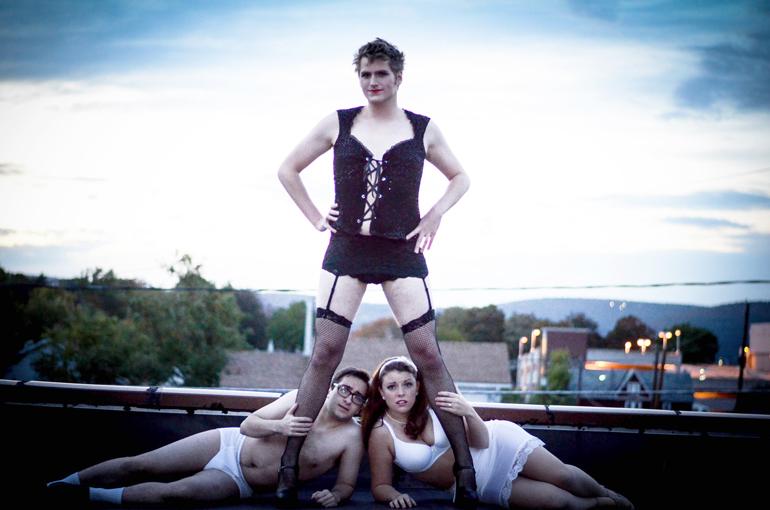 The Little Theater of Wilkes-Barre is inviting the Diamond City come do the time warp again as they get freaky with their latest production, The Rocky Horror Show.
It’s no ordinary show, Dana Feigenblatt claimed. Feigenblatt is the director of The Rocky Horror Show.
“This has to be the most fun show I have ever got to stage, because of all the interesting situations and things we’ve done,” Feigenblatt said.
“It’s just delightfully weird in every way. There’s nothing you can compare it to that’s like anything else.”
This is the first time The Rocky Horror Show is being staged at the Little Theater of Wilkes-Barre on North Main Street in Wilkes-Barre.
“We knew that it was a big seller and especially being done on Halloween, we knew that it would draw a lot of crowds,” Tom Franko said.
Franko is a member of the Board of Directors at Little Theater.
The Little Theater has partnered with the Woodlands Inn & Resort on Route 315 in Wilkes-Barre to promote the production.
“They have the facilities that we thought would be best to partner with this with the club and things along those lines,” Frank said.
“We held our auditions there in the executive lounge.”
Along with a Rocky Horror Show costume contest that was hosted at the woodlands on Sunday Oct. 12, the cast and crew are inviting patrons of the show to join them for an after-party bash preceding the final production on Nov 2, where the film will be featured among other festive activities.
The Woodlands Inn & Resort is offering a package deal including tickets, the room, breakfast, shuttle service to the show, and an audience prop kit for patrons who are attending the show.
The Rocky Horror Show was originally written for the stage by Richard O’Brien and premiered on June 19, 1973 when it originally premiered in London.
It was released for the screen, under title The Rocky Horror Picture Show on August 14, 1975, starring Tim Curry as Frank N. Furter and Richard O’Brien as Riff Raff.
The film also featured Susan Sarandon and Barry Bostwick as the plucky couple Brad and Janet.
In 1981, The Rocky Horror Picture Show earned a sequel entitled Shock Treatment.
“Ever since my father showed me the movie many years ago, I’ve been a fan of Rocky Horror,” Feigenblatt said.
Dana Feigenbalt’s father passed away over a year ago and she explained that being able to direct the production is incredibly important to her since The Rocky Horror Show was something they shared so intimately with each other.
Feigenblatt also appeared in the show on two separate occasions at the Music Box Play House in Swoyersville, PA and again at Showcase Theater in Exeter, PA.
The exuberant and excited director offered no shortage of praise for the cast of the show who showed a great deal of positive energy and enthusiasm for The Rocky Horror experience from auditions to rehearsals and if you think wackiness is limited to the stage, then think twice.
“The cast is laughing though a lot of it now, but as they get more and more comfortable you know they’re just having an absolute ball,” she said.
“It’s great to hear them say they’re enjoying the material and having such a fun time with it.”
Members of the cast, known as the Transylvanians, will be milling about the audience before the show setting the tone and picking out patrons who haven’t seen the show before and offering them to the stage for a virgin sacrifice according to Feigenblatt.
The virgin sacrifice is a traditional experience where audience members are allowed their moment on the stage.
This is where they get to interact with cast of Rocky Horror and show off, throw a little caution to the wind and just be funny and silly.
“It’s typically for people who haven’t seen the show before or have no idea what Rocky Horror is.”
Franko and Feigenblatt encourage audience participation in the typical Rocky Horror manner.
“Be loud, be obnoxious, be energetic and please come dressed up as your favorite character or one of the Transylvanians,” Franko said. “We want audience members to be everything that a Rocky Horror audience should be. Participate and tell the shout-outs.”
Members of The Little Theater of Wilkes-Barre only ask that if you bring your own props that they not be anything messy as there will be back-to-back shoes and very little time prepare between show times.
The Rocky Horror Show will be running Oct. 24, 25, & 31 and Nov. 1 & 2. For reservations and times contact Little Theater of Wilkes-Barre on the web at ltwb.org.