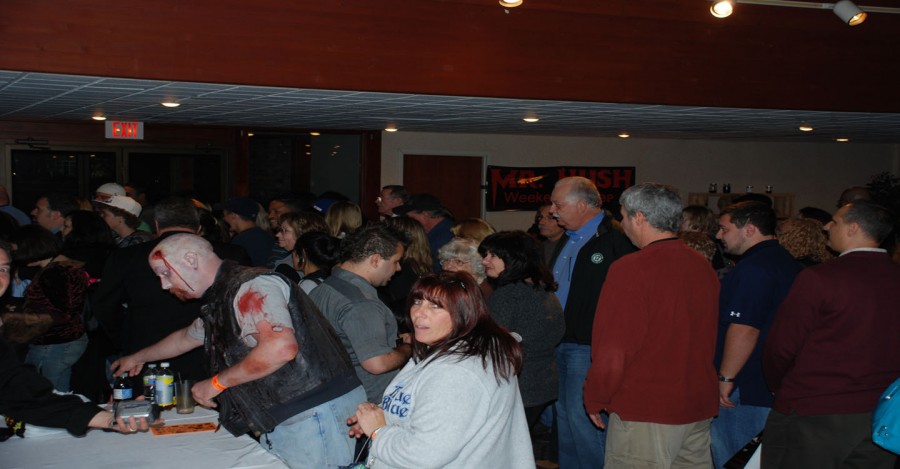 The Woodlands Inn and Resort on state route 309 is rolling out the red carpet as Wilkes-Barre welcomes Mr. Hush’s Weekend of Horror to the Wyoming Valley on Sept. 5-7.

The Woodlands Inn and Resort on state route 309 is rolling out the red carpet as Wilkes-Barre welcomes Mr. Hush’s Weekend of Horror to the Wyoming Valley on Sept. 5-7.

“I’m bringing some of the most incorrigible celebrities that you could ever meet,” David Madison said. “They love their fans and they’re all about having a good time. It’s just like one big weekend long party that everyone is invited to attend.”

Madison is a resident of Lords Valley, Pa. and an independent filmmaker who originally conceived the convention in 2010 to promote his own movie. He said it was so much fun and so successful the first time that he decided to do it again.

“It’s a celebration of everything that’s pop-culture, from comedy to horror movies and even sci-fi,” Madison said, but emphasized that the event primarily focuses on the community coming out for the weekend or even just for a night to have a good time.

The event is tailored to cater to visitors of all ages with events like a children’s costume parade. In addition, a costume contest will be held where the participant with the best costume will win dinner with Brian O’Halloran from “Clerks,” written and directed by Kevin Smith.

The convention will also host film screenings, a “Clerks” reunion featuring several members of the cast, and the opportunity to meet the stars of films like “Fright Night,” “Friday the 13th,” and more.

Madison said he chose the Woodlands in Wilkes-Barre for its convenient location and because of his love for the area.

“My family and I live close to the area … It’s right next to Scranton and New Jersey isn’t too far away. The Mohegan Sun is right down the road. I really thought that Wilkes-Barre would be a great little hub to hold the convention.”

Madison isn’t the only one anticipating the arrival Mr. Hush’s Weekend of Fear, however.

Darryl Mayeski, publisher and editor of Screem Magazine, currently resides in Wilkes-Barre and commented on the excitement of conventions and finally having one in our own back yard.

“It’s one of the first conventions of its kind to bring celebrities into Northeast Pennsylvania,” Mayeski said. “My hope is that it becomes successful because I’ve seen conventions that have started out with just two or three guests and now have 250 guests. So there is an incredible possibility for growth.”

Mayeski has been attending conventions for nearly 30 years promoting Screem Magazine. He emphasized that a convention like Mr. Hush’s Weekend of Fear is an excellent atmosphere for camaraderie where friendships are forged and people can meet others who share similar interests.

“It’s very communal. Where else are you going to meet the people who star in the films and people who share in the same interests?” Mayeski said.

“I have many friends that I’ve met through conventions and going back to them year after year has almost become like a family reunion. I look forward to them.”

Beyond having a good time, Mayeski expressed the beneficial effect that an event like Mr. Hush’s Weekend of Fear could have on the area.

“Conventions are very profitable,” Mayeski said. “The main reason I do conventions is to promote the magazine and develop a new readership. It also never hurts to meet your fan-base.”

Conventions tend to attract a lot of people from all over, according to Mayeski, and that gives hotels, local shops and restaurants an opportunity to benefit as well.

Rich Zeszotarski, of Wilkes-Barre, is a self proclaimed long time cult film enthusiast who has been attending conventions since the late 90’s and looks forward to visiting Mr. Hush’s weekend of Fear because, he said, it’s a chance to get out and mingle with celebrities, as well as have a great time searching for hard to find treasures at the vendors’ tables, or getting autographs from actors he’s idolized for years.

“It’s pretty mind boggling when you walk in to something like this for the first time. You don’t really know what to expect, but then you’re hit with a feeling like you’re a kid in a candy store,” Zeszotarski said.

He explained that in past conventions, stars have been just happy to meet their fans.

“I remember meeting Frank Frazetta, Jr. and carrying on a conversation with him for about 20 minutes, which was really cool for me because I’m a huge fan of the artist.”

Getting that experience, however, sometimes means going the extra mile and stretching a buck a little further.

Zeszotarski said that travelling the distance can take its toll on your wallet when you factor in the costs of hotel stay, dining out and travel expenses.

“What’s so great about Mr. Hush is it’s right in my own back yard. I could buy the weekend pass and go home and come back the next day. It’s convenient and potentially a lot of fun. Do I hope it’s a success? Absolutely. Success increases the chances of them coming back next year.”

Success, of course, depends greatly on the turnout and a good turnout depends on the attraction.

“I don’t see why this show can’t happen again. It’s going to be a lot of fun and I guarantee you that if the fans like the convention and if they want it, we will be back.”