WCLH: Keeping it locked since 1973 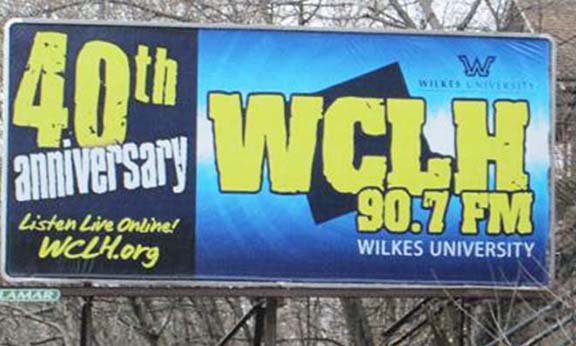 WCLH, 90.7 , Wilkes University’s student-run radio station, has reached its 40th year of providing its viewers with entertainment and information services.

WCLH is inviting the Wilkes community to a karaoke night to celebrate its 40th year anniversary of “Keeping it Locked.”

On Friday, April 25, WCLH will be hosting “40 Years Locked,” an evening filled with karaoke and refreshments from 6-8 p.m. in the Henry Student Center Ballroom.

“The event was organized to acknowledge the 40th year anniversary of WCLH,” Renee Loftus, WCLH general manager, said. “I was an avid WCLH listener. I feel very privileged to be a part of its 40-year legacy.”

Although the radio station is student-run, Loftus oversees the day-to-day operations of WCLH, working with the students on their broadcast education, training, and performance. She has been the WCLH general manager and adjunct professor in the Communication of Studies department for 11 years now.

The mission of WCLH is to provide cutting edge alternative, metal and hip-hop music to all of Northeastern Pennsylvania, plus serve the Wilkes community in new and exciting worlds.

Known for its slogan, “Keep it Locked,” WCLH has the potential to reach 500,000 listeners at a given time. It offers shows in various genres ranging from alternative, metal, hip-hop, news and public affairs, sports, among others.

Each semester the number of shows provided fluctuates, but there are about 60 active members this semester. They have shows airing live every day from 1-10 p.m. and five different pre-recorded syndicated shows air in the remaining time slots.

“WCLH has given me an opportunity to work with people dedicated to their craft,” Drew Feniello, WCLH e-staff member, said. “The continued passion for success has allowed WCLH radio to be one of the most successful college radio stations in Northeastern Pennsylvania over the past 40 years.”