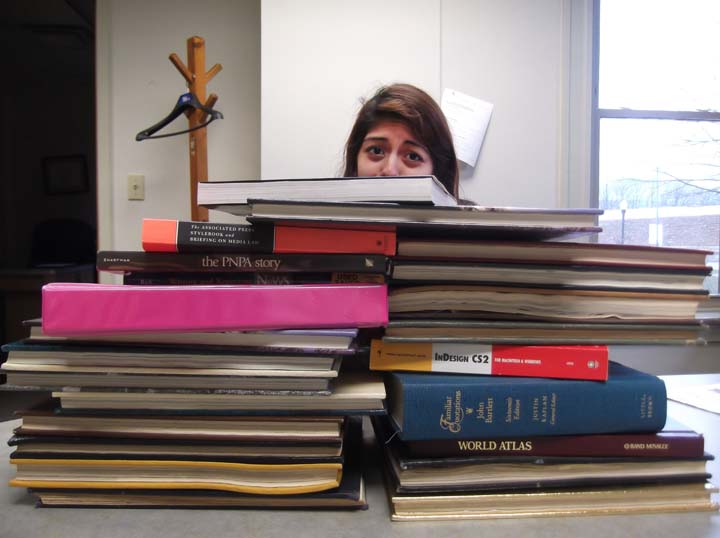 As they climb up the academic ladder in college, students may find themselves smothered by boatloads of work and stacks of books. While it is important to keep up with the work, remember, as Richelle Smith puts it, “You can’t sleep- walk through school.”

With graduation just weeks away, most seniors are on the relentless search for jobs. But, before they dive into the workforce, they’ve reflected on their years at Wilkes and have come up with some of the most valuable lessons that time has taught them to share with underclassmen.

Of course, keeping an eye on the clock and using time wisely will forever remain an important lesson. But students might also find that if they plan efficiently, an overlap in classes might emerge.

Political science major Nour Elbattah, who also has minors in Spanish and environmental policy, said it’s easy to double major when requirements for one’s major coincide with requirements for electives, if the mapping process is done right.

Connecting with those in your discipline Students shouldn’t pass up the opportunity to get to know professors in their particular department, especially one that is facilitated by a small, private institution like Wilkes.

“I think sometimes that’s overlooked,” Elbattah said. “I think students really need to create a professional relationship with their advisers and professors. If you’re going to see those professors more than once, you should probably create a communication with them.”

The word might seem redundant, but don’t underestimate the power of the concept.

Elbattah, who’s had several internships, said these two things are essential, and networking might just mean making people remember you.

“You never know how one person might lead you to the next thing or person,” she said. “It’s nice knowing that you might have made a good impression on somebody and you can take advantage of it. I think it’s OK to show your personality to people because you never know who might relate to or appreciate what you’re standing for.”

Good grades and test-taking skills are important, but putting what one has learned into practice counts just as much, if not more.

With that said, he urges students to find the drive and passion that they may have for something and go with it, because it, “will create an overall better outcome for yourself along with others” and “by applying the passion and drive, will ultimately make your life that much easier and enjoyable.”

When Peterson leaves Wilkes, he will take with him the idea to be open minded and explore all options available.

“You may really never know what you want to do unless you try everything,” he said.

As her years at Wilkes come to a close, entrepreneurship major Tory Price advises students to, “go the extra mile from day one to build your resume.”

She said you shouldn’t involve yourself with activities that won’t have any impact on your future. Rather, put yourself in a situation you’re fearful of, because it’s situations like these that will develop your leadership skills, as well as yourself, both personally and professionally.

Sometimes having someone by your side is beneficial, as well. Price said find an upperclassman, advisor or professor to help you get over the blocks in the road.

Price’s time at Wilkes has helped give her the confidence she needs to succeed in the world, and the same can go for everyone else.

“You can do anything when you apply yourself and never doubt it,” she said.

Get involved and keep pushing

Senior history major Richelle Smith advises underclassmen to “do what’s asked of you and put your whole heart into it.”

She believes that students should get more involved in their classes because it is more influential and beneficial than just listening to a lecture.

“If you become more involved in the conversation, you’re more likely to remember the information better,” she said.

Smith encourages students to “stay dedicated, don’t give up. Keep pushing. That’s really what it comes down to — you just have to have the drive. You can’t slack off and just expect to get through – you have to keep pushing.”

Don’t underestimate the amount of work

Smith said that one thing people don’t tell students enough about college is to expect that “there is a lot of work, a lot of work. It is not high school and you cannot get away with not doing the homework. You can’t sleepwalk through school.”

The friendships that Smith formed in college were a surprise to her.

“When I got to school I made a whole new realm of friends, and I’m actually closer to those friends now than the friends I had before school. It’s a different friendship, but it’s a stronger friendship. Before I came to school, my friends were very surface level. I felt like when I talked to them, it wasn’t anything intellectual.”

She feels like now that she has found herself – her ideas and political beliefs – she has more insightful conversations with her friends now.

Make time for other things

Senior marketing major and international student from Napal, Evana Manandhar, said “Don’t just crunch your time studying, there’s life after studying, too. Once you reach that senior level, you don’t have that time.”

“I think American and international students should get along together, to get different perspectives. That’s something I would tell all students to get involved in.”

Manandhar encouraged students to take the initiative and make an impact.

“Do something in your major that will leave your legacy behind.”