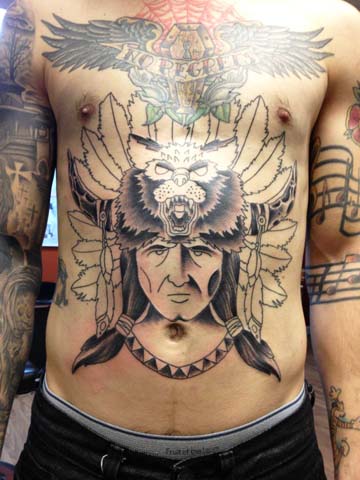 “It’s a neo-traditional tattoo, so it’s a little different from American traditional,” Roxana Mery explained, stretching her leg to reveal her newest tattoo, a rabbit surrounded by pussy-willows in front of a glowing red sphere. “It’s a bit more cartoonish with the colors.”

Mery, a sophomore psychology major, got the new ink on April 4th at the Electric City Tattoo Convention. Held at the Hilton in downtown Scranton, this year marks the fifth year that the convention has taken place.

The Electric City Tattoo Convention is essentially a giant tattoo shop, with artists from as far as Nashville displaying their work to the city as well as tattooing attendees. The event also included contests (from best back piece to a belching competition), food and live entertainment, including belly dancers and an acoustic set from Jon Simmons (Balance & Composure).

As excited as Mery is about her new tattoo, she does recognize a serious issue with her fondness for body art.

“It’s gonna be a little bit difficult finding jobs,” she said. “I’m definitely going to get scolded a lot for it.”

Tradition can indeed dictate that tattoos are unprofessional, but is that always the case? In a society increasingly tolerant of more progressive viewpoints and expressions of individuality, does this stigma against tattoos in the workplace still exist?

Some don’t think so.

“Tattooing has become a part of everyday culture. You see it on everyone, from your soccer mom to my dentist; he’s fully tattooed,” Eddie Focht of Heart and Soul Tattoo said. “It’s not that negative connotation of ‘only bikers or sailors have tattoos.’”

Focht, who has appeared at the convention four years in a row, said that society’s view against tattooing is starting to change, and that more and more people are recognizing that appearance does not dictate someone’s ability to perform his or her job.

“It doesn’t make them a better or lesser worker, it’s just someone expressing themselves,” he said. “You won’t get a better surgery if your surgeon has zero tattoos or if he has a couple of sleeves.”

“It’s definitely more acceptable today, even more so than when I started,” Mulvey said.

“As the younger generation starts moving up into organizations and becoming directors and vice presidents and recruiting managers…that’s helping the acceptance levels as well.”

While Focht and Mulvey said that the taboo against body art in the workplace is changing, they both stressed the fact that they aren’t completely acceptable yet.

Because of that, they both said it’s important to put a lot of consideration into getting a tattoo.

“Placement is important,” Mulvey echoed. “If you’re still unsure of your career path, not sure what direction you wanna go in, or even just for the job search, you’ll probably want to have them in places that can be covered up.”

“You’re still going to come across older and more conservative recruiters,” she continued. “You don’t know who’s going to be across that table from you. If it’s still someone who still views tattoos as taboo, you’re just going to create more hurdles for yourself in the workplace.”