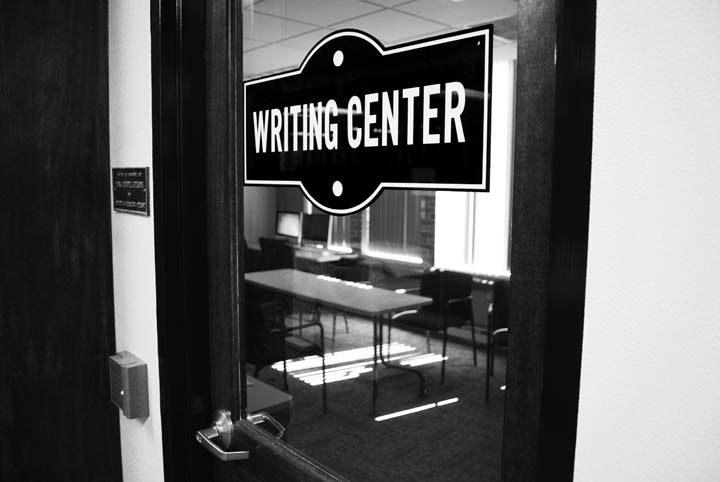 Students can get the attention they need with a simple visit to the Writing Center on the basement of the Farley Library.

Grammar, sentence structure, transitions, flow – the most common frustrations that accompany the organization of a cohesive, well-written paper. It’s a task of every college student to accomplish this. But worry no more – your university writing center has come to the rescue.

The Writing Center at Wilkes University is not necessarily just about working on the best possible paper for next class. It’s about building stronger writers through academic support.

It provides students with a sense of teamwork, as they collaborate with others, as well as develop writing skills and give them independence to be their own educators, critics and editors in the future.

Associate Professor of English and Philosophy Chad Stanley, who also oversees the Writing Center, thinks of it as a two-way street that is beneficial on both sides.

“It’s academic support for the client who comes in to work with the consultant, but it’s personal, professional and academic development for the peer tutor,” he said. “It’s a mentoring experience for them, they get to meet others and become a greater part of the campus and support community.”

The center had been in existence long before Stanley came to Wilkes in 2005, and since its start, it has seen a tremendous increase in the number of consultations per year, going from about 400 to between 1,000 and 1,300. Maybe these numbers also say something about the evaluations of consultations, which follow the same sort of model as the Student Response Survey.

“My goal has always been – and we’re inching closer to it – to achieve parody with the number of consultations we complete a year and the number of student undergraduate at Wilkes University,” he said.

An online writing version of the center has also been in place for quite some time, and although Stanley said he thought the online center would be more popular in proportion with the number of online courses and students, that’s not exactly the case.

“Students still want to come in and meet with a human being,” he said.

Sometimes the thought of having to put together a paper that makes sense and express’s an individual’s ideas can be a cumbersome task, but the thought of asking for help might be just as scary. However, Stanley said there haven’t been many encounters of reluctance to do so, which he’s slightly surprised by.

With the number of students across campus and those who swing through the library doors on a daily basis, it can be difficult to keep track of the visits the Writing Center receives.

Stanley said it attracts many repeat as well as different clients with different educational backgrounds, all of which show a commitment to academics and improving their writing. In fact, many of them are already equipped with great writing skills. But Stanley also hopes that students can take the skills gained at the Writing Center and apply them on their own.

“We want people returning, but we also want them developing the skills so they can increasingly be their own consultants,” he said.

Since its first days on Wilkes terrain, the Writing Center has consistently been the recipient of positive feedback. Stanley said the forms filled out within the center show “wonderful and glowing” comments.

But it doesn’t end at the comments left on a piece of paper. Truth be told, once in a while, faculty will talk of a student who shined from their time spent there. Students leave the writing center ready to write excellent papers, and faculty see improvements at the other end.

Faculty aren’t the only ones feeling satisfied with the work that comes from the Writing Center.

“They really enjoy their work, and in some cases, work the beyond the hours they’re scheduled or even paid for, which I certainly want to avoid and discourage, but it’s a sign of a real commitment to it.”

While consultants and students, do their best, and faculty clap on the sidelines at what’s being accomplished, at its core, the Writing Center is much more than a place for learning and heightening writing. It’s a place where relationships foster.

“It’s a community-forming and culture-forming activity,” he said. “Students meet each other. Students work with writing consultants who may already be friends, so it becomes kind of a social experience.”

And students who come reap the same kind of benefits.

“For the clients, this is certainly an academic support entity, but also a means of becoming greater, more closely attached to the university and one’s peers,” Stanley said.

While no one ever said the task was easy, they never said it wouldn’t be worth it.

“It’s very difficult work, but it’s very rewarding. You really get to different side of peers, and an enormous arch of improvement and pride comes from that.”

“You see the difference in people’s work as they progress, they kind of gain self-confidence in their writing abilities and overall,” she said. “Also, if they need help in tutoring, showing them toward the tutoring center as well.”

The satisfaction the Writing Center has given Koch has led her to seek other opportunities where help can be provided, no matter the nature of the job.

Koch finds that the internal struggle with most people is that they’re self-conscious about their writing, but the Writing Center helps to break things down for students. Writing can also be challenging for those whom English is a second language. However, the center’s relaxed and welcoming atmosphere makes asking questions a bit easier.

Most errors seen at the Writing Center are minor – things that require quick and easy fixes. There will always be procrastinators, but Koch said early visits are strongly advised. And remember, before submitting the draft, check for those basic foundations to ensure flow and a quality paper.

When writing is important to students, it also becomes personal, which is why Stanley said there is an anxiety associated with putting oneself on paper.

However, once students come to the Writing Center, the apprehension dies down. Perhaps this is credited to chatting about their work.

“It always helps to get yourself talking about what you’re writing about,” he said. “That occasion where a writer has to verbally communicate what they’re trying to put on paper is tremendously helpful.”

Anyone can be a mentor and any kind of work is accepted. However, there are some things to keep in mind.

Papers shouldn’t simply be dropped off. Secondly, the work is for the student writer, and the Writing Center largely serves to give students the opportunity to sit down, look over papers and find ways to improve.

While consultants might suggest options or provide comments for revision, they will not manipulate or alter work. Their role is to guide, not change/edit. Still, students who would like another set of eyes on their paper can take comfort in knowing that comments can help create a better writer.

Stanley said although it can sometimes slow things down, in reality that step-by-step writing process is an advantage because it provides that time for revision, during which the comments from consultants can be applied.

“Just that on its own makes for stronger writing – the more you can do to build stages into the process of doing the paper,” he said.

Students looking for guidance on their work usually come with something substantial. However, consultants are there to work with students, and provide help and support, so if students would rather just talk about papers instead of bringing them along, they can do that too.

The doors to the Writing Center in the basement of the Library are always open, and the same goes for online. But if students are more comfortable making an appointment by talking to consultants they know, there’s nothing wrong with that either.

So the next time you’re stuck on a paper, don’t stress. Head to the writing center, where someone will be willing to lend a helping hand.