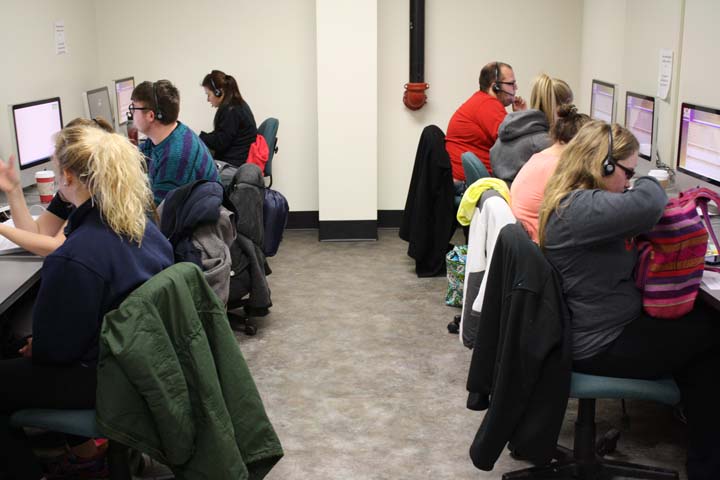 Phonathon, which made a switch to a completely computer-automated system, is a program that allows students to talk with alumni and gain funding.

For those who may not know, the Phonathon program at Wilkes University is one where students call alumni and ask for a gift for the annual fund – gifts that Associated Director of Alumni Relations Mary Simmons said support many things on campus like student scholarships and advances in technology.

“Some students think that their tuition is what supports all of that, and that’s part of it,” she said. “But without gifts from alumni, we wouldn’t be able to have the things we have here at Wilkes.”

Speaking of advancements in technology, in 2007 the program made a move from paper-calling cards with actual telephones to what is now an automated computer system with the Co. Ruffalocody.

New this year are a set of head phones and a script that enable students to talk to alumni in more depth, which has resulted in an increase of gifts.

A shaky economy brought with a decline in gifts for Phonathon, but those involved with the program have been working to bring it back up and Simmons said so far it’s been working.

What participants set out to accomplish each year involves a sort of cause-effect relationship, as goals are based on what was accomplished the previous year.

The very nature of the Phonathon program might be what differentiates it from all other work study jobs on campus, considering there are no others that inquire about donations.

However, that’s not the entirety of the program. An integral component of Phonathon is how it works to strengthen the bond between those who were once in the students’ spots and the students themselves.

In calling alumni, students are trying to build repertoire and establishing relationships by asking simple questions like how alumni are doing and what they did during their time at Wilkes. Especially as it makes for an extra personal tone, this is an important part of the communication process.

The opportunity for interaction that Phonathon provides is beneficial for students and alumni alike.

“For alumni, a lot of them really enjoy talking to students and asking them what Wilkes is like now,” Simmons said. “It also puts a personal connection there, so they’re more likely to give money when it’s just someone who works here that they don’t know asking them.”

For students, it may be more a matter of retaining that bond they worked hard to create and Simmons said hopefully, remembering to give back to the university down the road.

Perhaps it’s that continued interaction and conversation that is the most essential aspect of this Work Study Program, aside from raising support and funding for Wilkes. Senior criminology and psychology double major Rhonda Beth Lynch said what she enjoys most is the ability to converse with those who were once undergrads themselves about their current lives and time at Wilkes.

“A lot of them enjoy being called and seeing what you’re doing and going to be doing in the future because a lot of them really liked Wilkes,” she said. “A lot of them give advice about what you should be doing. I think what’s most important is that it’s students calling alumni instead of staff or workers because it’s more meaningful.”

Lynch said that interest from alumni in the lives of students and the advice alumni provide them based on their past experience here is what makes participation in Phonathon such a good opportunity. She also adds the importance of funds raised for scholarships and support for school – that without the program, wouldn’t be possible.

Just as important as building relationships, if not more, are the skills and preparation that a work study job like Phonathon provides for life after college.

“I think Phonathon is important because I think it helps with people skills, Zachary Lehr said. “You spend each day on the phone with people who (you) never knew and you have to interact with them positively. Having such people skills is mandatory in the real world no matter what job you get”

Building that sense of repertoire is important also to keep in mind that being rejected for a donation is not the end of the world, and alumni should know that. With the exception of those who wish not to be contacted, students call all alumni who have not yet made a gift in the annual fiscal year. Simmons said students ask for the first gift, and then ask a second time, but they don’t push too hard. After that, alumni are thanked and assured that students understand if they do not feel inclined to donate.

Should the alumni want to contribute, students ask for credit card info over the phone, which is entered into a secure system. Although this method is becoming more popular, if alumni are not comfortable with the idea, they also have the option of an invoice by mail and then sending a check back.

Even since being a Phonathon student herself, Simmons said the feedback from alumni about the program and Wilkes as a whole has been kept its positive standing/remains positive. Of course, there are some who don’t necessarily appreciate being called, but those same people aren’t so upset that students are the ones doing it.

Simmons said there have only been some dissatisfied students who have quit, which she believes is due to the fear of the phone and the receiver of the call. But she understands the pressure involved in participating in Phonathon.

“It’s nerve-wracking to ask a total stranger for money over the phone,” she said. “At first it’s hard to multitask, but once you get used to doing the job and speaking over the phone, it’s not hard. I can say that it has helped a few of the more shy students to open up especially with the other students, but no matter how tough your skin gets, some alumni can be very rude over the phone and take anyone by surprise.”

All of this is why Simmons tries to screen students when she hires them to see if it is the right work study job for them, but she said sometimes you never know. As life continuously shows us, anything is possible.

Like any other job, there is work involved. But don’t let that scare you away from participating. Simmons said if students are able and willing, they should go for it. Although it may seem daunting initially, it’s not just about making phone calls. Because students are only required a certain number of hours per week, Phonathon is not time-consuming, nor is it hard work.

Plus, if you’ve got a few little odds and ends to finish up in the way of homework, you can bring it along with you. Not to mention it’s a lot of fun, as Simmons points out, especially considering the contests and prizes. Work and fun mixed into one, who doesn’t like that?

And that’s what Simmons said people with an interest in Phonathon need to know.

“It’s a lot of fun, and once you get used to it, it’s really easy, she said — and the end it helps Wilkes get money.”

with all other Work Study positions, every year Phonathon is posted for students to see. However, it’s important to remember that positions are limited, only some people qualify and not everyone is cut out for the job. That part of the interview process is an important one, to ensure that that the job they want to pursue is one students can do. But even before that, they must be sure they have the proper work study money.