As many of you probably know, there are several Wilkes-related twitter accounts. Within the past few months, the number of Wilkes-related accounts, who are run by anonymous individuals, has soared. However, with that rising number comes a watchful eye.

Wilkes Crushes 2’s does not have a bio, but sophomore communication studies major Stephanie Hahn says, “You send messages in, and the account publishes them as tweets, but anonymously. My sister’s on it.”

SCROLL DOWN TO CONTINUE… 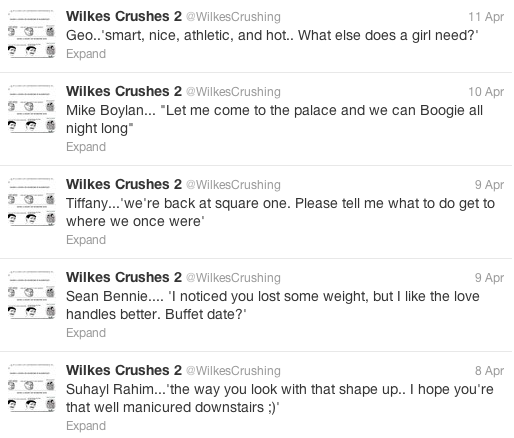 Wilkes Stories does something similar. “DM your Wilkes confessions and have them posted anonymously. Not affiliated with Wilkes University.” One of the account’s tweets from Friday, April 19, 2013 says: “Wilkes Fact! Stark Learning Center was in fact funded by Tony Stark. And an Iron Man suit is hidden in the basement.”

Wilkes Solutions states in their bio, “for every problem, there is a solution.” Whoever runs the account basically just solves Wilkes stuendts’ problems. For example, one of the followers of the account tweeted “Home cooked meal is all I want right now.” The account responded with “go home #problemsolved.”

Wilkes Girl Problems says, “I’m just a Wilkes girl with problems. Send me yours and I’ll post them too.” This account’s tweets include, “My flats keep taking the polish off my toes… I am not amused! #wilkesgirlproblems.” 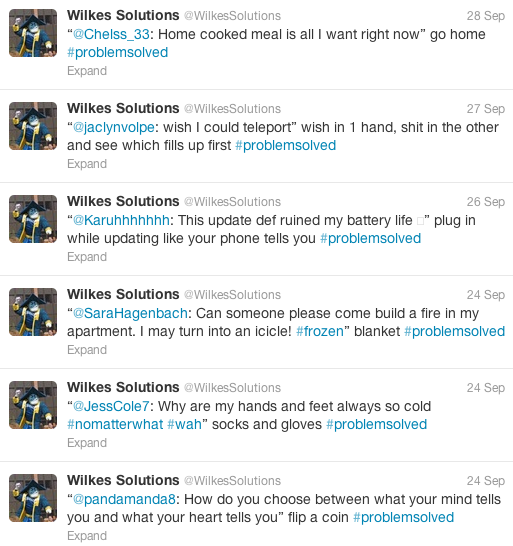 Reportedly some other accounts that were active were forced to be taken down due to unsanctioned use of the Wilkes University logo. The Beacon is waiting for official comments from the university, and will update the story when/if we receive them. None of the anonymous individuals operating the accounts responded to The Beacon’s requests for comment.