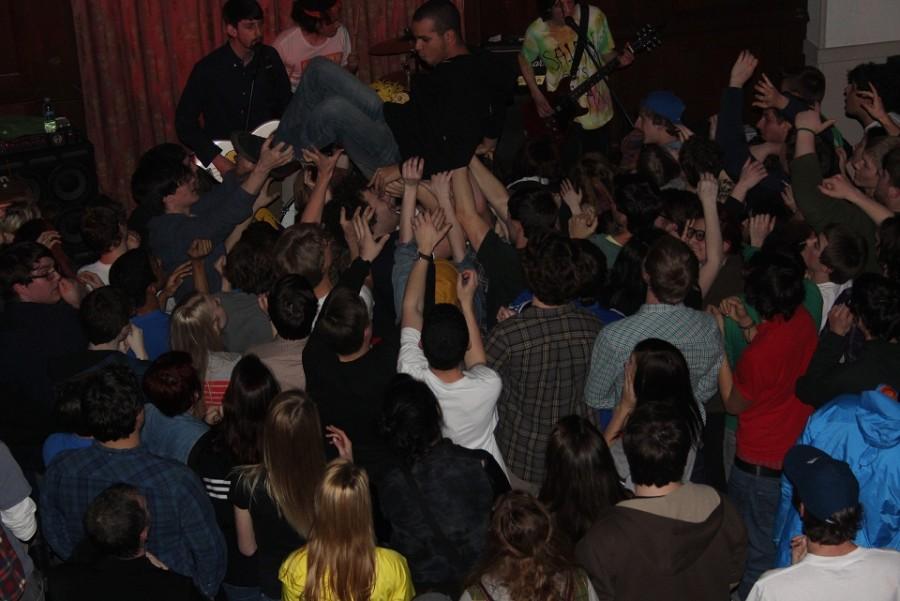 For well over a decade, the Wilkes Barre/Scranton area has hosted many transcendent artists & musicians from around the world. Since the unfortunate closing of the area’s preeminent music venue, Café’ Metropolis, a handful of other spaces have opened and closed alike. Fortunately for music enthusiasts, a multifaceted entertainment and multimedia collective dubbed Get Cryptic have  been operating under the radar. A committed group of friends guided by one Eric Davis, Get Cryptic engaged with Downtown Arts and have shined some light on the area’s independent music community once again. The fans who attended Halfling, Mega Yes, Captain We’re Sinking, Tigers Jaw and Forgetters at Downtown Arts on Sunday, March 24, can’t contend.

Unfortunately for some, this show was not all smiles. Two days prior, hometown heroes Tiger Jaw, of Scranton, announced a hiatus. Though the sanctioned reason of the hiatus is unclear, Tigers Jaw fans should find solace that band members Ben and Brianna will be embarking upon a full US/UK tour with the help of some fill-in players who they deemed “talented friends”.

But wait, there’s more good news; many side projects are blooming from the roots of Tigers Jaw. Those lucky enough to catch Waxahatchee at the Black Lodge last month (another Get Cryptic booked event), can comply that the act Petal blew the crowd away. Fronted by an emphatically talented female singer, Petal consisted of Adam and Ben from Tigers Jaw on instrumentals. Although technically a solo project, I had the pleasure of inquiring Adam about his status in Pedal and hinted that he most likely will be playing bass on any given Pedal set. From my experience at the Black Lodge, any Tigers Jaw fan would appreciate what I heard.

For those who will remain loyal to Adam, check out his flowering project Wicca Phase. Those who are familiar with Wicca Phase’s music will notice the irony in the use of “flowering” because the words primic connotations. Picture a dark electronic drone over a trap drum kit, all enveloped with murky and grotesque lyrics sung by Adam. Better yet, just check it out.

Through the unfortunate news of Tiger Jaw’s hiatus is grim, I must admit, Tigers Jaw killed it. Opening with a crowd favorite off their first record, hundreds of animated teenagers simultaneously screamed the lyrics to “The Sun”. Jumping on each others backs and fighting for the opportunity to propel themselves off the stage and into a sea of elated Tigers Jaw fans, the crowd literally went wild. Tigers Jaw supporters from as far as Montreal (Canada) made the trip to Wilkes-Barre, Pennsylvania for this performance.

The final performance of the evening came from the Brooklyn trio Forgetters. Fronting Forgetters is the legendary Blake Schwarzenbach who has fronted the popular punk act Jawbreaker and indie heavyweight, Jets to Brazil. Blake’s appearance is substantial to the well being of the Wilkes Barre/Scranton music scene accentuating that there is not only a desire for the profound local bands, but touring bands as well. Perhaps the most captivating facet of Blake is that his writing surpasses the lyrical poetry Jawbreaker, Jets to Brazil, and Forgetters fans cherish. Teaching undergraduate English at CUNY Hunter in New York City and presenting a profusion of public speeches, Blake has proved that his writing pierces through that of music fans but politicians and academics alike.

With more acts like Forgetters, energetic local acts such as Captain We’re Sinking and Halfing, and good spirits like the guys from Get Cryptic, Wilkes Barre may not be in the state of musical desolation that many seem to allege.