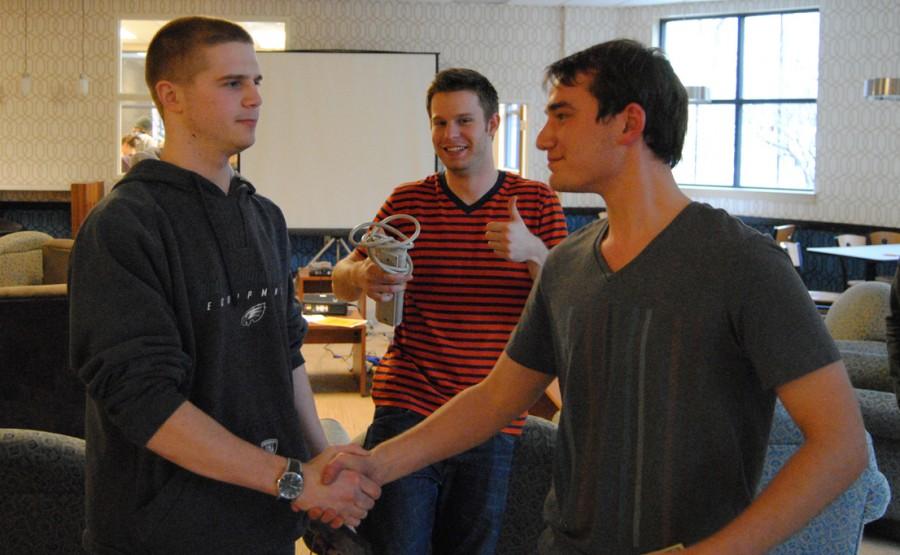 While it may all look like just fun and games, junior entrepreneurship major and Enactus Club President Dominic Manzione assures that it’s for a good cause.

“The tournament will help us with our other projects,” Manzione said. “We work closely with Ruth’s Place (women’s shelter) to help the women get back on their feet. And we’re doing a sustainable aquaponics point-of-place gardening system up at Hillside Farms to help educate people as well as make their farming system a little different.”

Manzione cited an event from that same morning where club members “raised over 5,000 pounds of food and donated it to the Salvation Army.”

With all the proceeds are going to help charity, it was easier justify Falcon Punching your roommates and friends into oblivion at $10 apiece. So with all high pressure from the competition, senior entrepreneurship major Nick Wesley drew comparisons between himself and boxing promoters.

“I’m like the Don King of ‘Super Smash Brothers,’” he said.

While some of the players were top-notch competitors, most of the participants, such as accounting major David Booths, threw their names into the hat just for the fun of it.

“I just planned on going into the one-on-one with some hopes of winning, but as soon as I grabbed a controller all my hopes went down the drain,” Booths explained. “These guys play it, they live it. I know some of these players play it every day of their lives!”

But even with the high level of competition and after an early elimination in both the 2v2 and 1v1 senior Terrence Ives kept a positive attitude toward the tourney, loudly proclaiming as he set down the controller, “Well, at least I donated to charity … We’re all winners.”