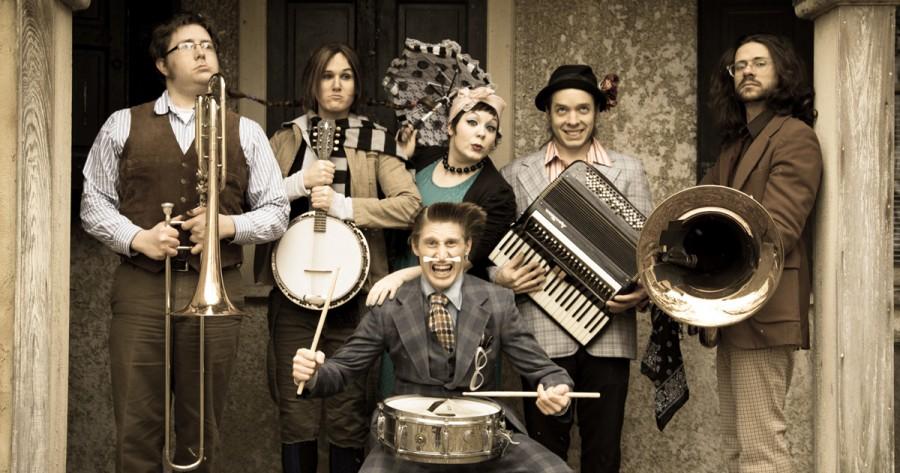 Musicians Sarah Shown and Taylor Galassi  come across as the sweetest couple imaginable, welcoming me into their Bethlehem home late at night with a smile.  More than happy to take time out of their busy schedules to talk to The Beacon, the two sat me down in their kitchen and offered me a cup of tea.

You would never be able to tell in this context that these two are actually “Tyrant Taylor” and “Saddle Sarah,” the frontman and leading lady of This Way to the Egress, a local gypsy-punk cabaret band. Onstage, the duo channels eccentric characters from the days of vaudeville during their elaborate performances.

Egress, as the band is sometimes known, has been busy traveling, recording their sophomore album and working on a music video for their new single, “Clarence,” a song about a seedy freak show ringleader written by Galassi.

“In recording (the video for ‘Clarence’), storyboarding it and reading all of the lyrics, it was almost as though he was writing about our crew,” Shown said.  “Not literally, but the fact that they’re kind of vagabonds, wandering, looking for a place where they can fit in enough to do what they love doing, which is putting on these elaborate shows.”

Besides the couple’s unique vocals, their songs feature instruments such as Galassi’s accordion and cello, Shown on piano and violin, as well as a group of fellow vagrants on tuba, trombone, mandolin and upright bass, giving them a unique and eclectic sound in a generation of Auto-Tuned pop.

“I grew up listening to the Violent Femmes and Weird Al,” Galassi said.  “After someone introduced me to gypsy-punk, I took a hold of it and began being influenced by (artists) like Gogol Bordello and Tom Waits and started writing music in that style.”

Shown, also inspired by such artists, channels a sense of old ragtime, big band, Southern blues and Americana into her songs.  Together, their music is more than a sound. That much is clear the first time you see them perform live.

“We look like we’re having so much fun together and it’s infectious,” said Shown.  “It’s about the comedy and the vaudeville that we put into our set.  We make it more about bringing our audience into the show with us.”

It’s not unusual to see Egress on stage with flame-eaters and burlesque dancers.  Even their name gives off a fun, old-timey vibe.

“I wanted all these elements of circus, sideshow, freak shows and all this stuff,” Galassi said, about choosing the band’s name.  “I actually came across this name that my friend pointed me to.  It’s the P.T. Barnum phrase that he would put over the doorway everywhere in his freak show, and people would be like, ‘Oh, it’s this way to the egress,’ not knowing that it was another word for exit, and they’d go out and have to pay another dime to get back in.  It was really just a scam.”

Shown made sure to add that Egress is anything but a bunch of scam artists, saying she would like to be viewed more as a storyteller.

“Although we haven’t told you many stories,” she noted humorously.

In response, Galassi proceeded to recount a time in New Orleans where he was bartering for a place to sleep. “The stipulation to sleep at this guy’s house was that he had an accordion, and said, ‘I want you to play accordion for my dog because he sings.’  I tried to get out of it, saying, ‘I’m tired.  I don’t want to bring my accordion in,’ but he had his own.  It was 5:30 in the morning, the sun was coming up … I was playing, improvising as the dog was singing the exact notes.”

When The Beacon inquired asked if the dog was any good, Galassi quipped simply, “I mean, like, it was a dog.”

The two shared many funny stories, only confirming that the energy they present on stage is the same energy they feel while in each other’s company.  This is the message they intend to put out in their new album, which will they’re hoping to release this summer.

“At the end of the day, we just want to be creating more and producing more music and art for everybody,” said Shown.  “That is what we deem as successful – the amount of music we can get out there for people to enjoy.”

“Who you’re doing that with is definitely a big part,” Galassi added.  “It’s about the family you create.”