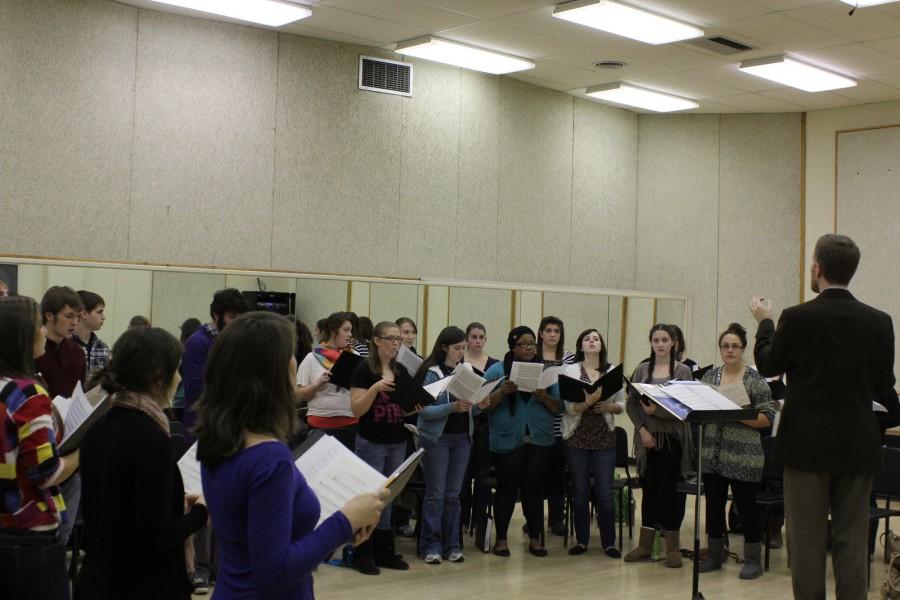 The holidays are a time for coming together.

That may be something of a cliché idea, but it nevertheless remains one proven true time and again every winter. Case in point, on Saturday and Sunday, Dec. 1 and 2, the Wilkes University Chorus and the Wilkes University Chamber Singers will team up with NEPA’s Robert Dale Chorale, as well as several university instrumental performers, for “GLORIA! Christmas Music for Brass, Choirs & Organ.”

Collaboration between the two groups is only natural, given that associate professor of performing arts Steven Thomas is not just coordinator and director of Wilkes’ own choral ensembles, but also the music director for the Robert Dale Chorale.

“There’s a lot of planning that goes into making stuff like this happen,” he said. “It’s a great experience for the performers, though. I always want my singers to have a great experience, but my singers who are students at Wilkes have a different level of experience and education than the adult singers I have in the Robert Dale Chorale. … It’s interesting to me to see these different groups and getting different things out of the experience.”

For Thomas, one of the most exciting aspects of the collaboration is the opportunity the events gives him to play with polychoral performance, in which the singers are divided into three groups, with each group singing different parts and actually spread out in different spots around the venue. The result, he said, is an almost surround sound-esque effect.

And while this isn’t the first time the Robert Dale Chorale has teamed with Wilkes’ choral ensembles, for Thomas the event represents a different kind of first.

“The marquee piece that we’re doing is John Rutter’s ‘Gloria.’ The ‘Gloria’ is part of the traditional Catholic mass, which has lots of different parts to it. John Rutter set the text to music – it’s something that’s been done tens of thousands of times, composers have been doing this for well over a thousand years, it’s a very long tradition – and it’s very dramatic, very exciting and a lot of fun to sing,” he said.

“I’ve actually never conducted it before. Every conductor has a list of pieces they’d like to get to someday, so this is one I can check off the list.”

In addition to Rutter’s “Gloria,” the event will also feature another variation on the “Gloria” by Giovanni Gabrieli, as well as performances of traditional Christmas carols and pieces by Michael Praetorius, Heinrich Schütz, Morten Lauridsen, Jan Sandström and David Willcocks.

Saturday’s performance will be held at St. Luke’s Episcopal Church in Scranton at 8 p.m., while Sunday’s performance will be held at St. Stephen’s Episcopal Church in Wilkes-Barre at 3 p.m. Admission is free for Wilkes students with valid ID, $15 for the general public and $12 for seniors and WVIA members. Children under 12 will also be admitted free when accompanied by a parent.