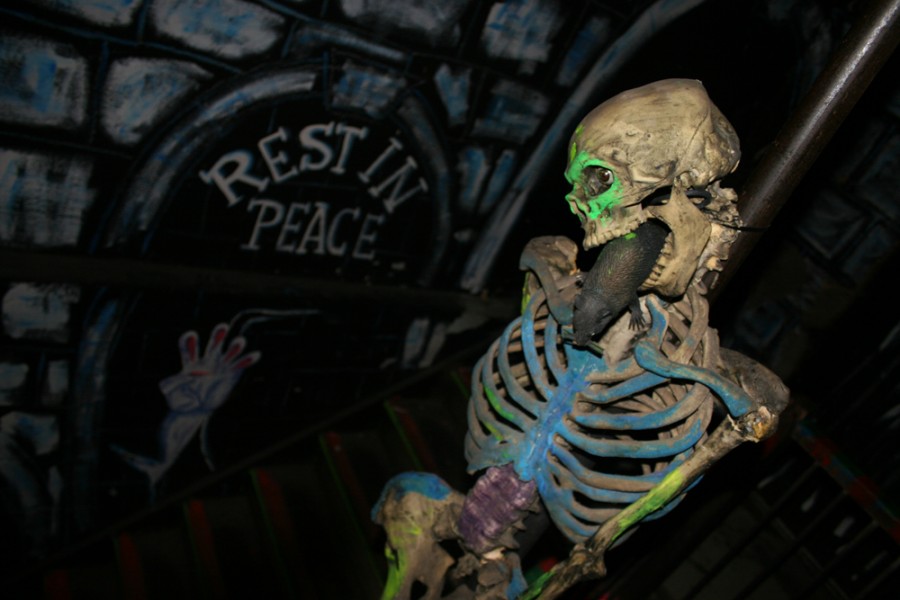 Last fall, the Horror Hall lobby was under four feet of water. Instead of lines of people waiting for tickets, the room was filled with mud and debris from the 2011 flood. Garbage from tipped over dumpsters was floating through the building, paint was coming off the wall and sheet rock was falling apart.

“The flood was devastating for us,” John Traher, Horror Hall coordinator, said.

But this year, Horror Hall is back with a vengeance. The haunted attraction, which is put on by the Plymouth Township Fire and Rescue Company, brought in nearly twice as many guests for their opening weekend September 28 with a count of about 1,000 people.

Visitors have more to look forward to than simply a tradition that has been a Halloween destination since it began in 1984. There are all-new sections of the haunted house, as well as annual improvements to things like lighting and timing to get the best scare out of people.

“Every year we strive to have at least two to three new rooms for people because it keeps it fresh,” Traher said.

Traher said the planning for Horror Hall begins as early as January.

Due to the flood damage, last year was the first time since its creation that Horror Hall had to shut down for the season. Fortunately, the haunted house itself was not damaged, but the big problem was the main electrical system for the whole building was underwater.

Usually the weather doesn’t affect the attraction, since it’s completely indoors. The 13,000 square foot building – which amounts to a quarter of a mile walk – stands out from many other destinations because it serves as shelter from rain and cold. Plus, Traher said they’ve been around the longest.

Horror Hall has been around throughout Traher’s childhood.

“When we first started back in ’84 it was all our members, their kids. You know. a lot of us that are members here today grew up doing Horror Hall,” Traher said. “We were the little Munchkins running around with scary masks on.”

Since then, the Hall has stayed modern with technology updates and annual improvements.

But what hasn’t changed: The crowds still come out. Traher said they have guests from all over the East Coast and beyond.

“There’s lots of people that come through and they tell us they come every year,” Traher said. “And it’s even more exciting when you have someone who comes through and says, ‘Oh yeah, I’m from Canada.’ You came all the way from Canada to come walk through our haunted house? You know, that says a lot.”

He said it’s typical to get 1,000 people in a single night toward the end of the season.

John Nash, chief engineer at the station, is hoping the success from the first weekend continues.

This goal is not so much about popularity, but more about resources, as Horror Hall is the station’s biggest fundraiser. All proceeds benefit the volunteer fire department by paying for things like training.

Besides the benefits of funds, the fire department staff has the added fulfillment of seeing people enjoy the thrills of their haunted house, which they said “definitely” makes all their hard work worth it.

“Excitement level is always high when they come through the door,” Merrit Nash said. “And we’re getting very good, positive feedback from people as they’re leaving.”

Nash said this excitement is all about people getting into the Halloween spirit, which is something that is celebrated throughout the various attractions in NEPA.

“I honestly believe that the Halloween season has become a very appealing season for people,” Nash said. “They like to get out in this time of year. They like to come to these attractions for the adrenaline rush and the excitement that is involved with them. I think the season has gotten better for everyone around.”

Horror Hall is located at 11 E. Poplar St., Nanticoke and is open Fridays and Saturdays 6 p.m. to midnight and Sundays 6 to 10 p.m., through October. Tickets are $12.50 and fast pass tickets are $17.50. For more information, visit horrorhall.com.