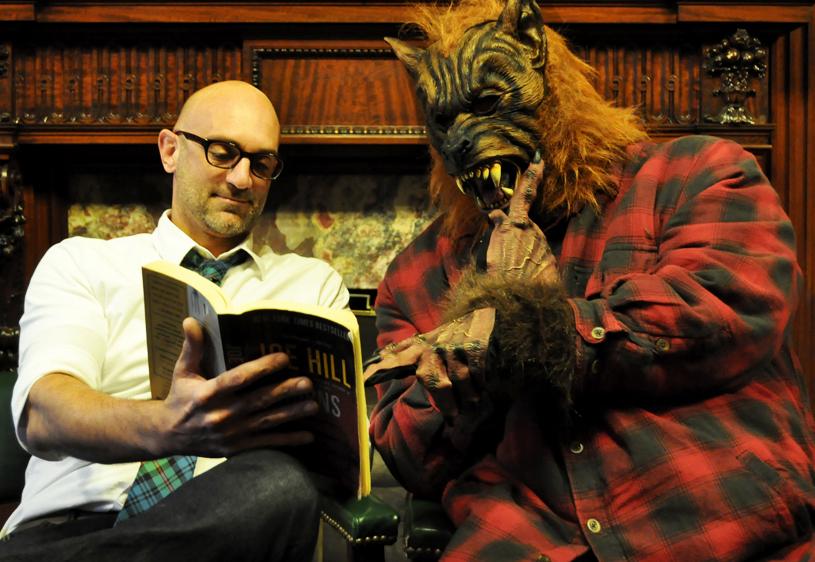 As October creeps in, Associate Professor of English Chad Stanley recommends some of the best books and movies sure to deliver chills capable of competing with even the stiffest autumn winds.

Spiders and mice. The dark. Nuclear war. Rats and actually “any sort of critter.” Clowns, mimes and people in “huge costumes (like) the Easter Bunny.”

What these things have in common is that they were all responses when I asked students in my current ENG 397: Horror and Science-fiction in Modern Literature course, “What are you afraid of?” Apparently, there are a lot of things that scare us, even those of us who have willingly enrolled in a course on horror fiction.

This is not surprising. During the Cold War, fear became cultural currency. Now, more recent events have awakened anxieties that generally lay dormant during the 1990s. It’s no wonder that horror has again become a growth enterprise and that horror writing and filmmaking are undergoing a new renaissance.

But while horror novels and films capitalize on and sometimes amplify our fears, they should also allow us to put our anxieties into perspective, reminding us that our world is actually a much safer place than we often perceive it to be: Werewolves and vampires don’t really exist – and as the Centers for Disease Control glibly reminded us this summer, neither do zombies.

As long as we keep this in mind and truly do keep it real, there’s some great scary stuff out there to enjoy – as always, it’s a good time to be scared.

Starting with the line “And on the second day things did not get better,” this novel focuses on a group of former college friends hiking through Sweden. They get lost, bicker and fight, and things get progressively worse. Then they encounter something else in the woods. A supernaturally-infused improvisation on James Dickey’s “Deliverance,” this novel is also an interesting take on a very real early-‘90s Norwegian cult and its legacy. Nevill’s “Apartment 16” (2010) is excellent as well, and his newest novel, “Last Days” (not yet published outside of the U.K.), is spookier than anything else he’s written.

The “Twilight” films tell us that where vampires shop at Hot Topic, werewolves model for Abercrombie & Fitch. But it’s a lot easier to make an informed life-decision about selecting a vampire or a were-boy as your significant other when the werewolves are 8-foot tall mangy critters that look like Scottish Deerhounds on steroids. This movie is fun and smart, from a time before we completely “Fight Club”-ed the image of the werewolf (see “Underworld”). Also, like Marshall’s later film, “Doomsday,” this movie pokes fun at the history of Scottish-English tensions and related concepts of race and ethnicity.

This collection contains some very creative short stories. My personal picks are: “On Skua Island,” about the exhumation of a bog mummy, and the over-the-top titled “Episode Seven: Last Stand against the Pack in the Kingdom of the Purple Flowers,” where two people are pursued not by werewolves, but a pack of another kind of seriously supersized canines.

These two Spanish films – about what at first appears to be a zombie outbreak in an apartment complex – are extremely tense, realistic and immersive. Filmed in “shaky cam mode,” they create a sense of immediacy and powerlessness for the viewer. Unusually, the sequel is every bit as good as the original, and they are both very smart, and very scary. Nyctophobics beware.

So the story goes: a twenty-something man goes out for the night and wakes up feeling less than well. Not an ideal or to-be-condoned situation, but not so unusual. At least not so unusual until we realize that he’s grown horns overnight, which explains the headache. Understandably, he puts on a hat. But then people start telling him about their most disturbing urges, and the horns grow. “Horns” is a brilliant, surreal, funny and quite sentimental, heartfelt horror novel. Essentially a breakup story, it’s a mixture of Nick Hornby’s “High Fidelity,” Franz Kafka’s “The Metamorphosis” and Stephen King, who is, in real life, Joe Hill’s father.

I didn’t think there was any way the image of a troll could arouse fear or even laughter anymore. I was wrong, so very wrong. Here, a few students in Norway decide to investigate illegal bear shootings; they’re film/communications majors, so they videotape everything.  However, instead of finding an unlicensed bear-hunter, they find a troll-hunter, a sort of fish-and-game warden employed by the Norwegian government. Not all that scary, but a really fun movie.

Another Norwegian film, this – be warned – is a much more gory horror-comedy about a much more real historical inheritance. During World War II, Norway was occupied by Germany, and while Norwegians established an effective resistance force, Vidkun Quisling seized power and became the nation’s Germany-backed leader. Horrors, and a legacy of guilt, ensued. In this movie, students head to the mountains for a holiday in the snow. There, they get a history lesson and confront zombified German soldiers. “The Evil Dead” + historical consciousness (and snow) = “Dead Snow.”

As if real, living bedbugs weren’t disturbing enough, this novel invests the pests with a supernatural pedigree. Enough said. Not exactly “bedtime reading.”

This decidedly American film plays out the fear of being buried alive in an intelligent and nuanced way. Like “Ravenous” (1999), it is a revisionist historical critique of American westward expansion as a horror story. Where “Ravenous” plays out Manifest Destiny as manifest cannibalism, this film depicts both indigenous and expansionist Americans as tasty treats for things that have lived and burrowed here long before either civilization existed.

Kiernan is one of the most unique and demanding writers of contemporary gothic and horror fiction, and it’s difficult to provide any sort of review of her individual works. She’s the kind of writer that requires, and draws you into, a reading of her entire body of work. Kiernan has published two different novels in a series: one starting with the novel “Silk” (1998), another with “Threshold” (2001). At the same time, many of her short stories can stand alone as powerful works, like “Houses Under the Sea.”  Kiernan’s novel “The Drowning Girl” is a dreamy fantasy. Like Joe Hill’s “Horns,” it focuses on a relationship and a set of conflicting relationships, some interpersonal, some possibly supernatural. It is, to quote from it, a tale of madness organized around different ways of telling “a ghost story with a mermaid and a wolf.”

Mega-creepy location? Check. Presence of asbestos and other toxins? Check. Unbearable levels of workplace and domestic tensions? Check+. Set and filmed at the decommissioned Danvers asylum in Massachusetts, “Session 9” is a puzzling, atmospheric film. It focuses on a clean-up crew, riddled with rivalries, attempting to detoxify the asylum within a tight timeframe.  Whether it is horror, realism or horror-realism is left up to the viewer to decide. It is almost unimaginable that the director’s previous film, “Next Stop Wonderland” (1998), was an indie romantic comedy.

Russian author Glukhovsky’s novel is the source for a 2010 video game of the same title, an upcoming sequel game (as well as a second novel, “Metro 2034,” which is sadly not yet published in English). On its own, it’s a brilliant mixture of supernatural horror and post-apocalyptic science-fiction. The novel takes us on a tour of Moscow’s underground Metro system, which has become home for the survivors of a nuclear war and their children. Now, the survivors are confronting a group of mysterious “dark ones,” and send off the main character, Artyom, in search of aid. With him, we travel from station to station, each area of the Metro having its own unique and often disturbing culture: There are hardcore Stalinist areas, stations controlled by opposing revolutionary Trotskyites and others held by neo-fascists. There are also abandoned areas that are haunted by the presences of those who perished in the nuclear fires, and other zones designated on the accompanying Metro map as presenting biological, radiological and psychological dangers. Things get really spooky when Artyom ventures up to the surface and investigates Moscow’s Great Library – where he disturbs the silence that the “librarians” violently protect. An amazing book with a truly revelatory ending.