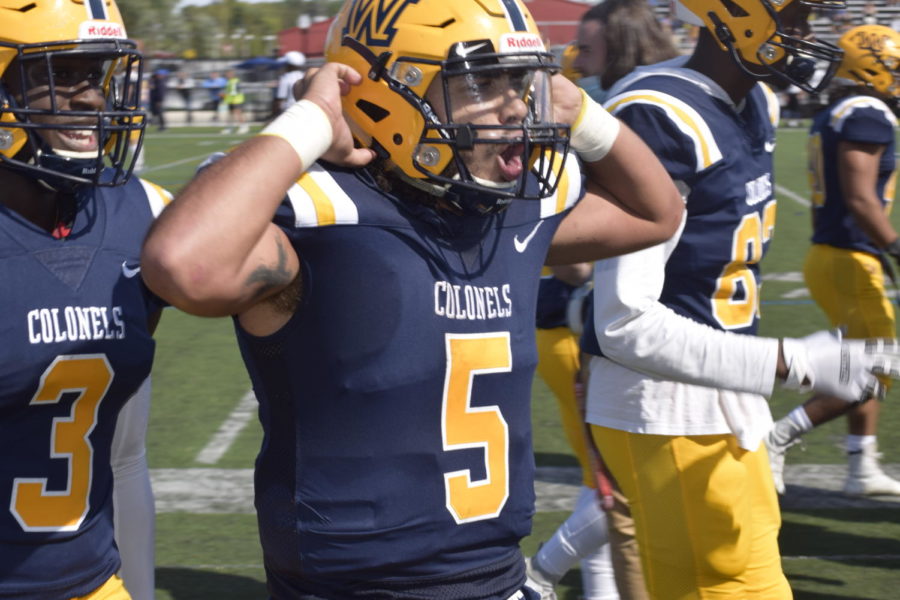 EDWARDSVILLE, Pa. — Wilkes Colonels advanced to 4-0 after a 21-14 homecoming win against Stevenson.

On the very next play, Tabora rushed for 27 yards to Stevenson’s 23-yard line. The offense then stalled, and the team went for it on fourth down but ended up failing to convert the first down. Wilkes took a field goal attempt to put some points on the board, but was unable to convert.

Stevenson’s first offensive drive was stalled by Wilkes’ stout defense. They started out with a run for 10 yards which was enough for a first down. However, following the first down, Stevenson battled to push Wilkes to 3rd  down and  one to go opportunity.

Colonel’s defense stood strong and stopped them from converting a first down. This forced Stevenson to punt.

Wilkes’ next offensive drive was almost gold. With 10:05 left in the first quarter, Wilkes started with the ball on their own 27-yard line. They started off with a one-yard loss on a rush by Tabora. Tabora bounced back and completed a four-yard pass and an 18-yard pass to sophomore wide receiver Cory Pelzer.

After an incomplete pass intended for Schweizerhof, Tabora rushed for six yards and then completed a fiery 35-yard pass to first-year wide receiver Devin Higgins. The drive came to an end when Pelzer fumbled on the 20-yard line.

We turned the football over twice, which we have got to get points in those situations. We missed the field goal as well. So, we have got to clean that up a little bit more.”

The defense held strong when it mattered most on Stevenson’s next drive.

At the start of the drive, Stevenson was torching the Colonels on the ground and dominated in yards after the catch. The first play of the drive was a 22-yard rush. This rush set the tone for the rest of their drive.

Stevenson took the ball all the way down to the Colonels 10 yard line but was stopped on fourth and goal to give the offense the ball.

Following the sack-fumble, Tabora rushed the ball 22 yards for a touchdown to bring the score to 7-0.

The Colonels’ next drive started out with a five-yard completion to sophomore wide receiver Nate Whitaker. Reed then ran the ball for three yards. On 3rd and 2, Tabora rushed for five yards to give the Colonels the first down.

Reed then rushed for four yards and seven yards to give the Colonels another first down. After one more sequence of rushing, Tabora completed a 34-yard pass to Pelzer to bring the Colonels to Stevenson’s 15-yard line. Sadly, the play ended with a fumble by Reed.

Stevenson, eager to get on the board, charged down the field with ease and scored a touchdown to bring the score to 7-7.

After the break, Wilkes could not have had a better start. Their defense forced a three and out on Stevenson.

Wilkes offense also came out with a bang. With rushes from Reed and Tabora, the Colonel’s drove down the field and scored. Junior wide receiver Jonah Lilley scored on an eight-yard pass from Tabora bringing the score to 14-7.

“We were lined up in Cover 2 Steeler,” said Doron. “I line up as if it looks like a blitz, but I drop back. I do not think the quarterback was expecting me to be in the right spot at the right time, but I came up and made a play and everything happened after that.”

Doran’s interception led to a promising drive for the offense. The drive was strong as the offense drove down to the Stevenson nine-yard line.

Instead of going for it on fourth down, Drach elected to kick the 27-yard field goal. Unfortunately, that kick doinked off the right post as the team put up zero points on that drive.

“Our field goal game is a little off at times in practice and in-game,” said Drach. “We took a shot and went for it because the kick was a little bit outside of our range. We went for it and did not get it but hopefully, we will get it next time we try.”

For the rest of the 3rd quarter, both teams stalled on all sides of the ball.

Tabora opened up the 4th quarter drive with an interception, but sophomore linebacker Dante Gazzola decided that the offense needed more time on the ball and intercepted the quarterback.

The offense did not do much with their second chance as they punted the ball.

The following drive was special for Tabora as he passed Boo Perry who had the previous record of 6,940 passing yards in his Wilkes career. Tabora now holds the team passing record for yards.

“First of all the win came first and that meant more to me, said Tabora. “Breaking the record was one of my many goals here and it is just an honor to have that record. There were a lot of greats that have come through here. It is just an honor to be related to that. It feels really good because I put in a lot of work, had a couple of surgeries, and just kept ticking.

“I stayed this extra year and it means a lot.”

Following the drive, the defense held strong and forced a turnover on downs.

Tabora rushed for five yards and then completed a 15-yard touchdown pass to junior tight end Jacob Katz to bring the score to 21-7.

After the touchdown, Stevenson had one last drive which ended in a completed hail mary for a 33-yard touchdown.

The game ended with a score of 21-14 with the Colonels winning on homecoming.

Their next game is away against Albright College on Oct. 9 at noon.