BASE: Wilkes clinches first pair of wins on the season in doubleheader with FDU-Florham 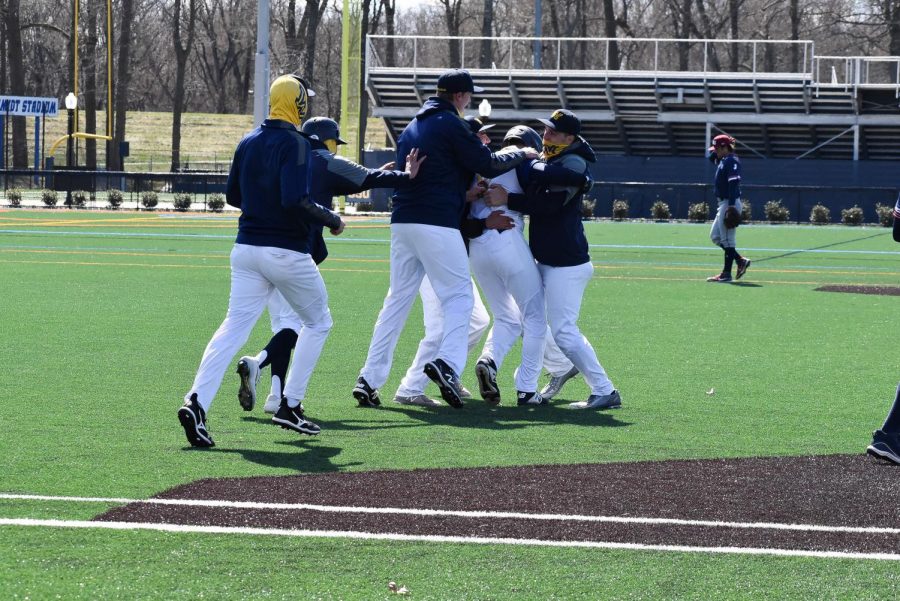 Colonels rushed the field to celebrate with Jonah Harder, who reached first base on an error in the bottom of the ninth inning in game one to score the walk-off run. Wilkes won 7-6 in extra innings against FDU-Florham in game one.

On Friday, Wilkes posted back-to-back victories against FDU-Florham, 7-6 and 9-0, clinching their first pair of wins on the 2021 season. Prior to the doubleheader, Wilkes had only been able to secure one game in each four-game series against Arcadia, Misericordia and Stevens.

The Colonels advanced their 3-9 record to 5-9 following the doubleheader wins.

“The last few weekends, we’ve been close,” said head coach Kevin Gryboski. “We just haven’t gotten the key hits late in the game, and we lost some of those games, but today, we kind of got the two-out hit and the key hits to drive in runs.”

With two outs in the top of the first, FDU-Florham claimed a 2-0 lead with a Tommy Moore two-run homer to left field. The Colonels quickly equalized the score with two of their own in the bottom of the second. Nick Malatesta, who went 5-for-7 on the day, led-off the inning with a single to right field, while Jonah Harder followed with a walk to put men on first and second. A sac-bunt by Matt Reinert moved runners to second and third, allowing Vinny Bobbin to bring in Malatesta with a sacrifice fly and Dominick Bayo to bring in Harder on a single up the middle.

The score would remain tied at two until the top of the fourth, when a four-run inning by the Devils would help them to reclaim their lead, 6-2.

Wilkes would begin their comeback in the bottom of the fifth, snagging one run to make the game 6-3 when Malatesta singled down the left field line to score Brandon Reno, who reached first on a fielder’s choice earlier in the inning.

The Colonels would continue their comeback campaign in the bottom of the sixth, tallying three runs to tie the contest at six apiece. With one out, a Michael Patrizio walk would start the inning. Patrizio would steal second during Bayo’s at bat, securing the 50th steal of his career and being only the seventh Colonel in program history to have 50 or more steals. Bayo and Nick Pronti would load the bases with a hit-by-pitch and walk, respectively. A sacrifice fly by Reno would bring in Patrizio, while a single to right field by Darren Kerdesky, who went 3-for-5 in the first game and 5-for-8 in the doubleheader, would bring in Bayo and Pronti to tie the game.

Seven innings would not be enough for this first matchup between Wilkes and FDU-Florham, as the game would extend into extra innings. Three scoreless innings by Andrew Indzonka on the mound, who followed Colonel starter JT Hibschman, would set up Wilkes for the walk-off in the bottom of the ninth. A double by Kerdesky to left-center would put the winning run on base. A sac-bunt by Malatesta would move Kerdesky to third, allowing him to score when Harder reached first base on an FDU error.

Following the 7-6 victory over the Devils, Tony Molitoris’ complete game shutout with three strikeouts would propel Wilkes to a 9-0 victory in game two.

“If there was a better pitcher this week, then I don’t know who it is,” said Gryboski. “(Molitoris) has thrown 14 shutout innings in this week – on Monday and then to come back on Friday and throw seven more shutout is as dominant as you can get.”

In Wilkes’ only win of the series against Stevens, Molitoris recorded five strikeouts and 97 pitches over seven shutout innings. Wilkes won 6-0 in their third contest against the Ducks.

In game two against FDU-Florham on Friday, the Colonels would not wait long to get on the board, as Bayo would hit a solo home run to left field in the bottom of the first to take a lead that Wilkes would never relinquish. Bayo would go 2-for-2 in the second game with a walk and sacrifice fly. In the two contests, he would tally four RBIs.

The contest remained a 1-0 game until the bottom of the fifth, when Wilkes opened up their offense with four runs to take a 5-0 lead. With one out, Patrizio found his way on base with a walk. A double to right field by Bayo would score Patrizio to make the game 2-0. Pronti would follow Bayo with a double of his own, trading places with the two-hitter to increase Wilkes’ lead to three. Malatesta, who went 3-for-3 in the contest, would single to left field with a two-RBI shot to cap Wilkes’ scoring endeavors in the fifth with Pronti and Kerdesky (who was hit-by-pitch) rounding the bases.

In the bottom of the sixth, the Colonels would add insult to injury to conclude the contest 9-0. Back-to-back walks for Bryan Nifenecker and Harder, as well as a hit-by-pitch for Reinert, would load the bases for Wilkes. A hit-by-pitch for Patrizio would bring in Nifenecker, while a sacrifice fly from Bayo to left field would score Harder. Kerdesky would finish his impressive performances at the plate with a two-run triple to right field, scoring Reinert and Patrizio.

“We have to go win the series … I don’t want to use the word ‘split’ – I want to go there and at least win one and hopefully win two,” said Gryboski. “We gotta be focused and play clean defense like I thought we did. It’s an easy game when you’re throwing strikes and not walking guys and defense is playing well behind you, but when you make errors and you walk guys, that kind of hurts us and that was our M.O. early on in the schedule. We’ve kind of cleaned some of that stuff up, and hopefully moving forward we’re pitching to contact and getting outs.”

Wilkes will travel to FDU-Florham for the second half of the series with a doubleheader in Teaneck, N.J. First pitch is scheduled for today at 11 a.m.