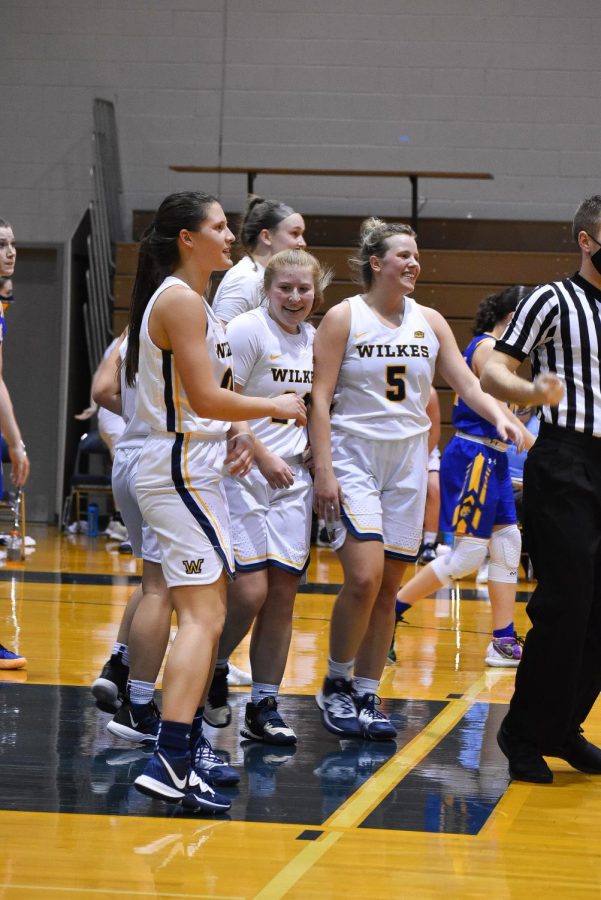 The Colonels celebrate after guard Kendra Smith (center) scored in the paint.

WILKES-BARRE, Pa. – In their first victory against Misericordia since 2017, Wilkes also picked up their first win of the season, 49-41, in a low scoring, back-and-forth Middle Atlantic Conference game.

The Colonels used their defensive strength throughout the entire game to shut down the Cougars.

“We did an outstanding job taking their sets away from them and forced them into tough shots,” said head coach Tara Macciocco.

The Colonels used a full court press for most of the game that helped slow down the Misericordia attack.

“Our full court press helped us shut down their defense because it slowed them down a lot before they could actually start a play,” said sophomore guard Brenna Babcock. “We also had to close out on shooters hard and just follow through with our scouting report and knowing all of the tendencies of each player.”

The Colonels continued their relentless pressure to maintain the lead they had established in the first two quarters. Wilkes also looked to push the tempo of the game and generate open looks through transition.

“They are a good defensive team, so the keys were definitely taking care of the ball on offense, taking advantage of passing the ball up the court in transition and crashing the boards on a shot for the offensive rebound,” said senior guard Maddie Kelley.

Misericrodia sat in a two-three zone for most of the game that had a lot of length on the backline. Wilkes consistently pushed the ball up the floor, looking to get easy layups in transition before the Cougars could set up their zone.

Heading into halftime, Wilkes was able to profit off of their high paced game, out-scoring Misericordia, 30-19.

Wilkes’ defense was solid for most of the game, but a 13-2 third quarter for the Cougars made it a three-point game going into the fourth quarter.

After scoring just three points in the third quarter, the Colonels offense erupted for 16 points to shut down the Misericordia comeback attempt.

“This was the most physical game we played this season so far on both ends of the court,” said Kelley. “The thing that stood out to me the most was when the game got close again in the second half, we did not let up.”

Macciocco was happy to see the resiliency of the team after the third quarter.

“We took an early lead. Misericordia made their run, we did not fold, we kept battling and were able to finish the game,” said Macciocco. “I also think we showed that defense and rebounding are keys to winning games. I also think we showed some good things offensively, getting scoring from multiple people in different ways.”

The Colonels made big plays down the stretch on both sides of the ball, and they have many positives to take away going forward.

“Overall, I just think this was a huge win for our team,” said Babcock. “We all played hard as a solid group, and even though we had a period where we crumbled a little bit, we all stuck together to pull out the win against a good team.”

The Colonels will look to continue their winning ways next week with back-to-back games against Delaware Valley. Wilkes will play Friday night in the Marts Center at 7 p.m.. No fans are allowed in attendance, but a link to the livestream can be found at gowilkesu.com