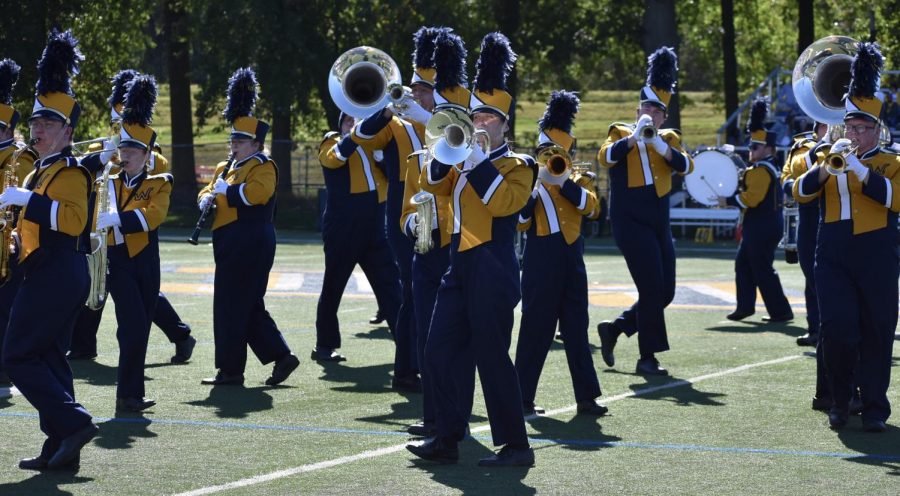 At universities across the country, many college students enjoy seeing their classmates perform underneath the bright lights of a sporting venue. At Wilkes University, this enjoyment may soon be coming to an end.

Wilkes is home to the region’s only collegiate marching band, but pre-existing enrollment and financial concerns that were heightened by the recent COVID-19 pandemic may put the band’s future in jeopardy.

“As a football player, I always appreciated and enjoyed seeing the band share their talents every home game,” said former captain Bud Moyer ‘20. “They are one of the key elements that set our home games apart from other schools. Additionally, I understand the importance of being a member of a team on campus, and I’m sure the band shares these same qualities – it provides them the opportunity to share a close bond among peers who share the same passion.”

Due to the university’s economic situation, several non-tenured faculty members have been informed that the upcoming academic year will be their last with the school. Dr. Mark Johnson, assistant professor of music and current band director, is one of the included staff members who will not be reappointed after the 2020-2021 school year.

Johnson could not be reached for comment prior to publication.

When the Wilkes-Barre community learned of Johnson’s non-reappointment, they feared that the Marching Colonels would soon follow in their director’s footsteps. Klarissa Rinker, an alumna of Wilkes University, started an online petition titled “Save The Wilkes University Band Program” to bring awareness to the possibility of the marching band’s departure.

The petition currently has over 1,500 signatures, as of July 3.

“I feel like a marching band really captures school spirit, and not having one will definitely impact the environment at all sporting events,” said Drake Marshall, a junior guard on the men’s basketball team. “With not having a marching band, I really feel that we need to start packing the student sections so that our teams can feed off that energy that the band would offer.”

Last year, the Marching Colonels had 45 members and often performed at football, basketball and ice hockey games. There’s no denying their presence at sporting events, and athletes at Wilkes assert they don’t go unnoticed.

In addition to Moyer and Marshall, Brianna Stanton and Carolee Pierce agree that cutting the band would have a negative impact on the players and the supporting crowds.

“When the band would perform, the energy in the stadium would always be an all time high,” said Stanton, an ice hockey player who competes at the Toyota Sportsplex on Coal Street. “They are the backbone of the chants, and without them, I firmly believe the hype and energy involved with Wilkes sports would decrease.”

Pierce, a member of the women’s basketball team, echoes Stanton by offering her appreciation toward the band’s performers.

“Personally, I think losing the marching band would have an impact on some of the smaller sporting events that they come to,” said Pierce. “The team really appreciates and loves when the marching band is at our games because they add to the overall atmosphere of the game and make it feel much more lively than what it really is.”

Although the local community may be concerned about the status of the marching band, the University claims these concerns may be premature, as the band program has not been cut.

Gabrielle D’Amico, Wilkes’ executive director of communications, stated, “In May, several probationary faculty members received non-reappointment letters signifying that the upcoming academic year, ending in May 2021, would be their last. This led some to conclude that the band programs would be going away, too.”

As of July 2, D’Amico noted that there had been no additional changes or updates to the status of the marching band program.

Yet, athletes argue that the band’s suspected removal would take away a crucial aspect of any sporting event – the college atmosphere.

Wilkes has yet to officially decide the fate of the Marching Colonels, but the voice of the community has been heard. The online petition to keep the marching band alive can be found at www.petitions.net/save_the_wilkes_university_band_program.