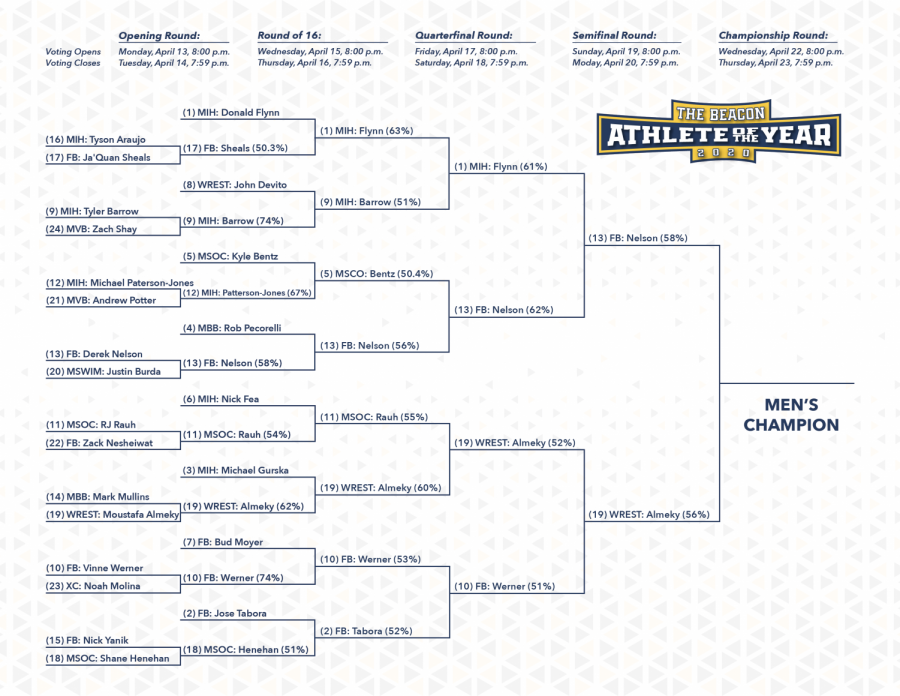 Both sides of the bracket have been updated after the Semifinal Round. No. 13 Derek Nelson (football) will face-off against No. 19. Moustafa Almeky (wrestling).

The third annual Athlete of the Year tournament completed its two-day Semifinal Round on Tuesday, advancing two athletes on each side of the bracket to the Championship Round.

Action concluded in the fourth round with a total of 2,513 votes. The men’s side saw 1,139 votes on the Twitter polls, while the women’s side saw a slightly higher 1,374 tallies. To date, the tournament has accumulated 17,235 votes in four of five rounds.

Four athletes competed on both the men’s and women’s sides in the Semifinal Round. In a tournament that has been defined by upsets, the Semifinal Round was no different and suffered three upsets out of the four total competitions.

The women’s side of the bracket

Of the four contests, only one pairing had a higher seed win the poll to advance to the Championship Round: No. 8 Maddie Kelley (women’s basketball/field hockey) versus No. 13 Lauren Baldwin (field hockey). With field hockey being a prominent sport in this year’s tournament based on votes, the face-off between these two athletes was not completely out of left field.

In fact, the two secured the most interaction on any poll in the competition thus far with 877 votes, 22 retweets, 21 likes, 11 comments and multiple quote-retweets. In a tournament where the women have amassed more votes in each round, a competition between teammates in the Semifinal Round garnered increased attention.

The two teeter-tottered back-and-forth, with multiple lead changes and no clear winner until the clock ran out, when Kelley ultimately won with 51 percent of the vote.

In her second Athlete of the Year tournament, Kelley has proven to be a force to be reckoned with. After her impressive campaign as a 14-seed in last year’s tournament, the dual-sport athlete has found herself in the Championship Round once again.

Last year, Kelley was the women’s runner-up – only losing in the final poll to then-No. 1 seed Gab Giordano ’19 (women’s basketball/softball). As a 14-seed, the fan-favorite missed the Athlete of the Year title by a one percent margin with Giordano claiming 50.5 percent of the vote.

Despite finding her way to the Championship Round for the second year in a row, Kelley is not is a shoe-in for the crown and will face a stiff competition in No. 19 Karlye Huffman (women’s volleyball).

After being knocked-out in the first round last year as a 28-seed, Huffman has had quite the comeback story. This year’s 19-seed has won four consecutive contests, removing a higher seed from the competition in each of her victories.

In the Semifinal Round, Huffman topped No. 10 Emily Bidelspach (women’s soccer) with 51 percent of the vote.

Bidelspach had recently knocked-out fellow teammate and two-seed Jessica Egan (women’s soccer) from the tournament in the Quarterfinal Round, making Huffman’s semifinal victory that much sweeter by eliminating such a strong contender.

However, Huffman is facing another beast in the polls in the Championship Round. Both Kelley and Huffman have demonstrated the power of the popularity vote in the support of friends, family and previous sports teams encouraging voters to cast their votes one way or another.

Looking not to repeat the same fate as last year, Kelley could gain a substantial following wishing to push her into the winner’s circle. Yet, Huffman has been a dark horse throughout the duration of the competition and has just as great a chance as any to upset the tournament bracket once again.

One thing is certain, however, as the two are bound to have a back-and-forth contest that comes down to the wire.

The men’s side of the bracket

On the men’s side, No. 13 Derek Nelson (football) pulled off a major upset, removing top-seeded Donald Flynn (men’s ice hockey) from the bracket. Considering the hockey star’s superior skills and achievements on the ice, his elimination comes as a surprise. However, there is a silver lining for Flynn in that the forward is a sophomore and will have two more seasons to be nominated in the annual Athlete of the Year tournament.

Nelson received the largest percentage of the vote on any poll in the Semifinal Round with a 58 percent to 42 percent victory over Flynn.

Nelson has surpassed each of his four opponents with at least 56 percent of the margin, a commendable feat in a tournament where upsets have defined the playing field. Notably, the senior wide receiver has eliminated three of the top-eight seeds who received first-round byes in the contest.

After defeating No. 20 Justin Burda (men’s swimming), Nelson went on a winning-spree. No. 4 Rob Pecorelli (men’s basketball), No. 5 Kyle Bentz (men’s soccer) and Flynn were no match for Nelson’s tournament strategy.

The senior is the only remaining football player in the tournament, where six other Wilkes football stars came up short in the bracket. Out of a total of seven representatives from Wilkes football, including quarterback No. 2 Jose Tabora, 13-seeded Nelson has gone on to vie for the crown.

Facing-off against Nelson will be No. 19 Moustafa Almkey (wrestling), a 197 lb. junior who has claimed the limelight of this year’s competition. The wrestler secured 56 percent of the poll in the Semifinal Round against No. 10 Vinne Werner (football).

Werner proved to be another dark horse in the competition, alongside fellow 10-seed Bidelspach on the women’s side. Werner’s successful senior season attracted a broad following for the defensive lineman who defeated back-to-back football teammates in No. 7 Bud Moyer and Tabora.

Yet, Almeky was able to top another fan-favorite in Werner during the Semifinal Round poll that accumulated 734 votes. Now, he has the opportunity to face-off against another football player in Nelson.

The Championship Round matchup comes with a palpable controversy, as Almeky’s vote total soared in the Quarterfinal Round against No. 11 RJ Rauh (men’s soccer).

The Rauh-Almeky poll was subject to tampering, in which The Beacon’s Sports staff determined that neither athlete was the cause of the additional automated/”fake” votes. However, the incident has left a sour taste in the mouths of some fans on social media and could be a downfall for Almeky.

The interaction on the championship poll will be the tell-tale sign as to which athlete will come away with the victory. Almeky has the chance to continue his vast presence on Twitter with the popularity vote, while Nelson has a chance to earn the coveted Athlete of the Year title as the one football player to advance this far in the competition out of seven.

Either way, the athletes will make history in the third annual Athlete of the Year tournament, as the previous four winners from the past two years (two male and two female) haven’t been seeded lower than a five-seed.

In 2018, then-No. 1 seed Marcus Robinson ’19 (men’s basketball) and then-No. 3 seed Gracen Stauton (softball) claimed the crown in The Beacon’s inaugural Athlete of the Year tournament. Robinson was in his junior season, while Stauton was in her sophomore campaign.

This year, the tournament has the chance to see two 19-seeds as champions, a 13-seed or an eight-seed. Not to mention that Nelson is the only senior of the final four competitors. Whatever the result is, winners on both sides of the bracket will make a stand, demonstrating the power of the popularity vote and the evolution of the tournament.