AOTY2020: Quarterfinal Round suffers seven upsets out of eight polls; Semifinal Round set for Sunday 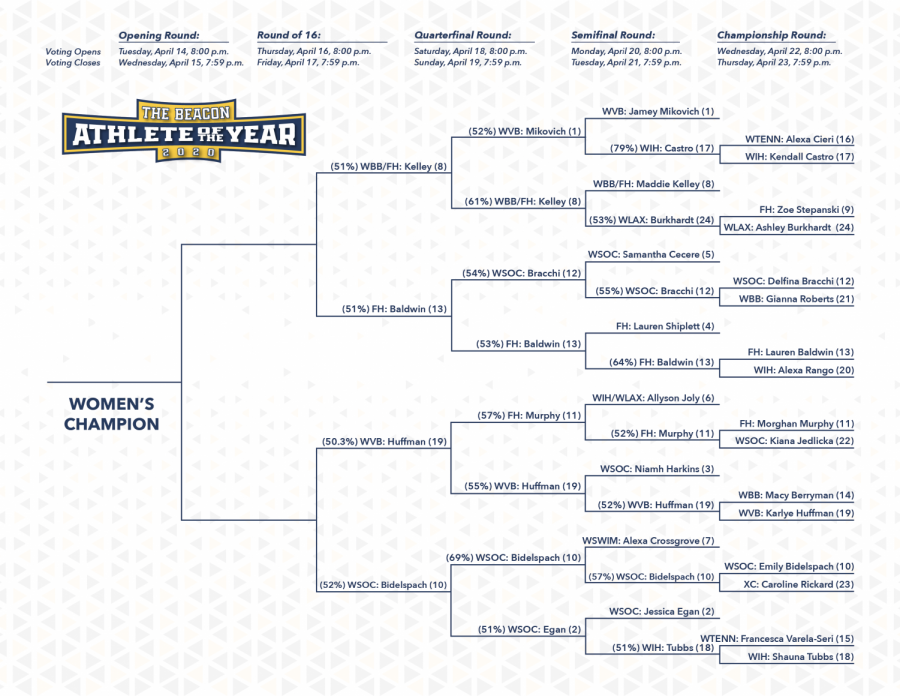 Both sides of the bracket have been updated after the Quarterfinal Round. The women's side advanced four upsets and only one top-eight seed in No. 8 Maddie Kelley (women's basketball/field hockey).

The third annual Athlete of the Year tournament completed its two-day Quarterfinal Round on Sunday, advancing four athletes on each side of the bracket to the Semifinal Round.

Action concluded in the third round with a total of 3,892 votes. The men’s side saw 1,605 votes on the Twitter polls, while the women’s side continued to trump the men’s with 2,287 tallies. To date, the tournament has accumulated 14,722 votes in three of five rounds.

Of the four polls on the men’s side, only one favored seed – No. 1 Donald Flynn (men’s ice hockey) – advanced to the Semifinal Round. The women’s side was not as fortunate, however, as some late pushes and lead changes in the voting polls sent four upsets to the semifinals and knocked out both top seeds.

Flynn topped fellow-teammate No. 9 Tyler Barrow (men’s ice hockey) with 61 percent of the vote – the second-highest win differential in the Quarterfinal Round.

Despite not making it far in last year’s tournament, the two shifted gears this year and changed their momentum. While Flynn earned a first-round bye, Barrow knocked out No. 24 Zach Shay (men’s volleyball) in the Opening Round. Getting his comeuppance, Barrow avenged the men’s ice hockey versus wrestling matchup in the next round, beating No. 8 John Devito (wrestling) with 51 percent of the vote.

In the Round of 16, Flynn topped No. 17 Ja’Quan Sheals (football) with 63 percent of the vote, leaving Flynn and Barrow to face-off in the Quarterfinal Round. Flynn remains as the only athlete left in the tournament who was seeded in the top-eight on the men’s side.

Among the men’s three upsets, a football versus football matchup sent the tournament’s two-seed packing. First-time nominee No. 10 Vinne Werner (football) edged fellow senior No. 2 Jose Tabora (football) with 51 percent of the vote.

As an underdog, Werner has proven to be a fierce competitor with back-to-back victories over fellow Colonel football athletes. After beating No. 23 Noah Molina (cross country) in the Opening Round, Werner snagged 53 percent of the margin against teammate No. 7 Bud Moyer (football) in the Round of 16. Coming off of a football face-off victory, Werner topped record-breaking quarterback Tabora in the Quarterfinal Round.

The first-time Athlete of the Year nominee has topped two fellow seniors on the Colonel football roster, demonstrating the support Werner has amassed over the course of the competition.

Perhaps even more startling, the women’s side did not advance either of their top-two seeds.

No. 1 Jamey Mikovich (women’s volleyball) lost to No. 8 Maddie Kelley (women’s basketball/field hockey) in a 51 percent to 49 percent margin. Similar to Werner, fellow 10-seed Emily Bidelspach (women’s soccer) topped her same-team second-seeded competition. Bidelspach claimed 52 percent of the vote against teammate No. 2 Jessica Egan (women’s soccer), propelling two No. 10 seeds on either side of the bracket to the Semifinal Round.

The senior was selected to the All-MAC Freedom Second Team for the third consecutive season, broke the school record for career kills in October and broke her own school record for single-season kills with 422 this season. She ranked 17th in the country in kills, 21st in attacks, and 26th in service aces. Yet, Mikovich’s impressive stat line and top-seeding was not enough to surpass fellow two-time Athlete of the Year nominee Kelley.

Kelley has proven to be a fan-favorite twice over. Last year, the dual-sport athlete was the women’s runner-up – only losing in the Championship Round to then-No. 1 seed Gab Giordano ’19 (women’s basketball/softball). Kelley’s presence has not slowed down with the popularity vote, topping this year’s one-seed prior to the Championship Round.

Ironically, Kelley topped Egan in last year’s tournament with 64 percent of the vote in the Quarterfinal Round. This year, the two will not receive the opportunity to face-off again due to Bidelspach’s victory over the No. 2 seed.

Across the bracket, Flynn and Kelley are the only athletes with first-round byes left in the tournament.

With top-seed upsets, another surprising feat of the 2020 tournament is the success of the No. 19 seeds – on both sides of the bracket. Karlye Huffman (women’s volleyball) and Moustafa Almeky (wrestling) have each won three consecutive contests to advance to the Semifinal Round.

In the Quarterfinal Round, Huffman topped No. 11 Morghan Murphy (field hockey), a local from Mountain Top, Pa. who attracted attention in the tournament with consistently high voting poll tallies. The Murphy-Huffman poll accumulated 751 votes – the highest total of any Quarterfinal Round matchup. Ultimately, Huffman slightly edged her competition with 50.3 percent of the vote.

Huffman, last year’s No. 28 seed who lost in the first round to then-No. 5 seed Nicolette Towlen ’19 (women’s soccer), has experienced a completely different showing in her second Athlete of the Year tournament appearance.

Fellow 19-seed Almeky topped No. 11 RJ Rauh (men’s soccer) with 52 percent of the vote. Following a tampering incident on the first poll, in which The Beacon’s Sports staff determined neither athlete was the root of the skyrocket of around 500 votes in favor of Almeky, the poll received a re-vote. Rauh and Almeky faced-off the next day for three hours – the time frame that the initial poll was in question for – to advance one athlete to the Semifinal Round.

Almeky won the controversial poll with 52 percent of the vote, accumulating an impressive 724 votes in three hours – being only 27 votes shy of the highest poll of the Quarterfinal Round of Murphy versus Huffman. (The tampered poll that received 1,004 votes was not factored into either athlete’s tally, nor was it counted in the entire tournament’s vote total.)

In addition to Flynn, Werner, Almeky, Kelley, Bidelspach and Huffman, the final two spots in the Semifinal Round were earned by a pair of 13-seeds.

On the men’s side, Derek Nelson (football) amassed the highest win-percentage of the Quarterfinal Round, snagging 62 percent of the vote against No. 5 Kyle Bentz (men’s soccer).

The 13-seed has maintained consistent attention in the tournament with three consecutive wins, two of which were top-eight knockouts. Nelson found victory in the Opening Round against No. 20 Justin Burda (men’s swimming), then against No. 4 Rob Pecorelli (men’s basketball), and finally against Bentz.

Nelson’s back-to-back victories over two top-eight seeds make the 13-seed a reasonable threat for top-seeded Flynn in the semifinals.

On the women’s side, Lauren Baldwin (field hockey) continued her campaign as a 13-seed with a Quarterfinal Round victory over No. 12 Delfina Bracchi (women’s soccer). As two first-time Athlete of the Year nominees, both Bracchi and Baldwin had won two prior matchups before their 12 versus 13 competition.

Ultimately, Baldwin came away with the pairing by a 51 percent margin to round out the women’s top four contenders in the Semifinal Round.

The Championship Round will take place from Wednesday at 8 p.m. until Thursday at 8 p.m. for both men’s and women’s sides of the bracket. Both Athlete of the Year tournament winners will be crowned on the same evening.