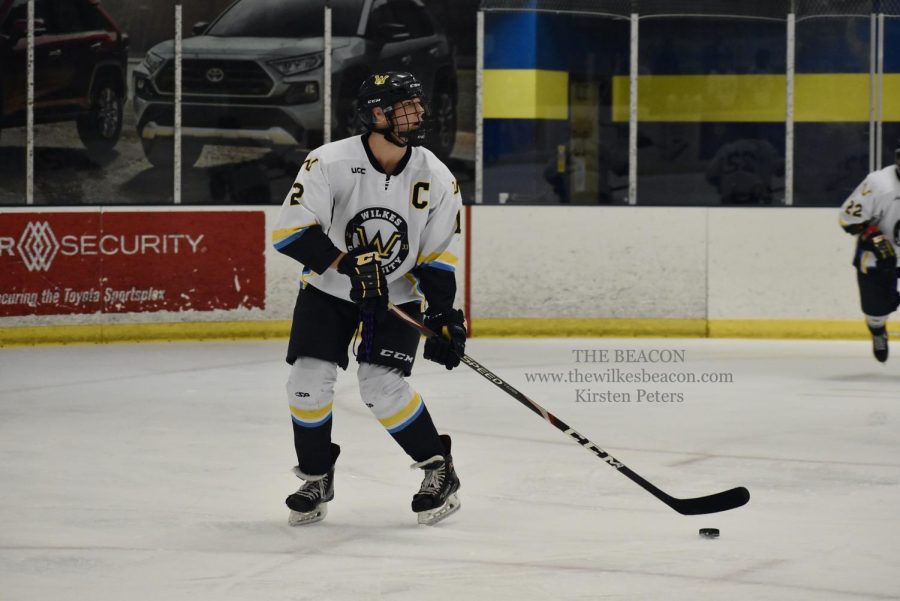 Michael Gurska, the Colonels’ captain, quietly turned in one of the best season’s offensively for any defenseman, leading all defensemen and finishing fourth in the country with 33 assists. Gurska was named an AHCA second team All-American.

While the sports world continues to regroup from cancellations from COVID-19, Wilkes men’s ice hockey had multiple players receive high recognition for their impressive seasons.

“When you make one of those All-American teams, there are definitely pro-eyes on you,” Wilkes coach Tyler Hynes said. “I think with the building that we play out of, and the fact that it is an AHL team’s facility and they spend all their days there, means there is definitely eyes on them – and all three of them can definitely play at the next level.”

On Monday, March 23, Flynn was nominated by the AHCA for the Sid Watson Player of the Year award. By Friday, it was determined that Flynn did not win that award, but the nation’s leading goal scorer did land a spot as an AHCA first team All-American and a spot on the USCHO’s second team.

“I’m extremely grateful. It’s an honor to represent this school and program,” Flynn said. “I’m excited to continue to build the program with this team.”

Flynn is the first player for the Colonels in their first two seasons to be up for a national player of the year award.

“I’m excited for him, and it is great for the program because things like this can be done now,” Hynes said. “It really more so is a reflection of him as a player. He took abuse night in and night out and to keep his head enough to do what he did production-wise for us on the ice and the games he helped us win was huge, and it is nice to see him recognized.”

Flynn’s historic season did not come out of nowhere. Last year, as a freshman, he led the team with 14 goals and 38 points. This season, he led the country in goals with 27 and became just the second player in United Collegiate Hockey Conference (UCHC) history to top 50 points.

“You look at his freshman season and say, ‘Wow, what a year,’ and then often times you’ll see a sophomore slump,” Hynes said. “It shows his hunger, and that he wasn’t satisfied. I talked to him and congratulated him, and I could tell in his voice that he is still hungry and not completely satisfied in the results so far.”

Flynn’s partner on the top line – Fea – also had a breakout year, finishing second in the country with 35 assists. He also added 12 goals and was named to the USCHO’s third team.

“(Fea) skates like a pro right now. He is one of the most fun players to coach,” Hynes said. “He is low maintenance, easy-going and has the same calm, cool demeanor no matter what.

“He doesn’t get caught up in his success. For him, it is all about the team.”

Playing with a goal-scorer like Flynn can definitely help a player’s stats, but for Fea, his playmaking abilities definitely helped Flynn and the Colonels have one of the best power plays in the country, finishing at number 10.

“(Flynn) and (Fea) played such a key part in our success this year, and we are so fortunate to have the two of them in our program,” Gurska said. “They have a pro-like mentality on-and-off the ice and both put in so much work and care so much that it makes this recognition the least bit surprising.”

Gurska, the Colonels’ captain, quietly turned in one of the best season’s offensively for any defenseman, leading all defensemen and finishing fourth in the country with 33 assists. He also helped run the point on the dangerous power play with Flynn and Fea.

“He had huge impacts on-and-off the ice. On the ice, what he did for that first power play was very important and was something that was undervalued,” Hynes said. “The way he commands the ice is tough to explain through words until you see it in person. He is in control of everything that is going on, and he doesn’t have to move too much to do it.

“In the locker room, he has a charisma and an energy to him. He is the vocal leader of our team, and the way he conducts himself, the way he talks about the program, the team and his teammates. He had plenty of options out of juniors that wanted to build and start something special, and I think he has shown that he is doing that.”

In turn, the defenseman was named an AHCA second team All-American.

“(Gurska’s) vision is incredible – one of the best I’ve ever played with,” Flynn said. “He represents our program so well. It’s great to see him get recognized – he deserves it. He shows up to the rink every day with a positive attitude. He’s great in the locker room and does everything right.”

The future for the second-year program is bright. In its two seasons, Wilkes has already won a playoff series, made it to the conference championship series, had a USCHO rookie of the year in Tyler Barrow last year and now two All-Americans. With one of the All-Americans a player of the year nominee, and two selections to the USCHO.com teams.

“To have all these guys only going into their junior year next year is not something that we take for granted,” Hynes said. “We know what our window to accomplish what we want is. We know the clock is ticking, and we aren’t getting any younger. But at the same time, it is exciting to get to give it another shot next year with the same horses.”