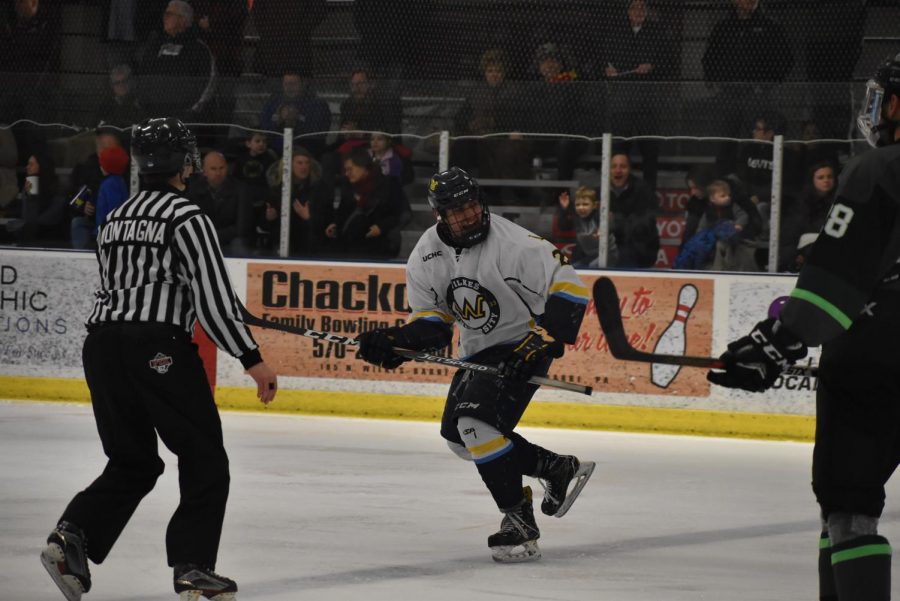 The Colonels were without Donald Flynn, one of the country’s top goal-scorers, so they needed to get production from elsewhere on their roster. Ryan Galvin, Billy Berry and Dylan Kuipers each scored for Wilkes, all three combined for six goals on the season before the game.

“Our message going in was that some other guys are going to get opportunities,” Wilkes coach Tyler Hynes said. “As a coach, it’s really exciting to see guys who work and may not always get all the credit that they deserve, like Ryan Galvin, who has been great for us all year. He may not always show up on the scoresheet, but tonight he gets rewarded for it.”

The game went back and forth to start. Stevenson opened up the scoring with a goal from Chris Lee, under five minutes into the game.

Wilkes answered before the end of the period. Danny Reidel scored his first goal with a one-timer off a faceoff with two minutes left in the game.

“Joey Pasquini does a great job winning faceoffs, and we had the set play called,” Reidel said. “He got the puck to me, and I took the shot.”

Stevenson scored the next goal, less than a minute into the second period. But Phil Erickson scored another goal off the faceoff, tying the game at 2-2.

Once again, the Mustangs reclaimed the lead with Christian Ripley finishing an odd-man rush for Stevenson, making it a 3-2 game.

The Colonels continued the trend, tying the game up with a goal from Dylan Kuipers, but the lead was once again regained by the Mustangs.

Wilkes waited until the 12:41 mark in the third period to tie the game up this time, as Reidel took advantage of

Stevenson goalie Ryan Kenny misplaying the puck. Reidel was able to put the puck in an empty net to tie the game up.

Just over a minute later, the Colonels took their first lead of the game with a goal from Berry. The lead grew to two with a power play goal from Nick Fea on the lone power play of the game for Wilkes.

Galvin put the game away with an empty-net goal, but Stevenson cut the lead back to two with a late goal from Collin Woods.

The Colonels now are one win away from playing in the UCHC championship. They will play game two today, and with a win or a tie, the Colonels will clinch the series victory.

“Hopefully, we play our game for three periods instead of just one (tomorrow),” Hynes said. “We know it wasn’t perfect and it wasn’t pretty today, but games aren’t this time of year. It’s a war, and we knew that going in. I’m glad we figured it out as the game went along.”

The Colonels ended up outshooting Stevenson 40-34, and now improve to 3-0 against the Mustangs on the season.

Stevenson needs to win today’s game in order to stay alive. If they do win, it will force a tiebreaker minigame, which is a 20-minute game played 15 minutes after the second game concludes.