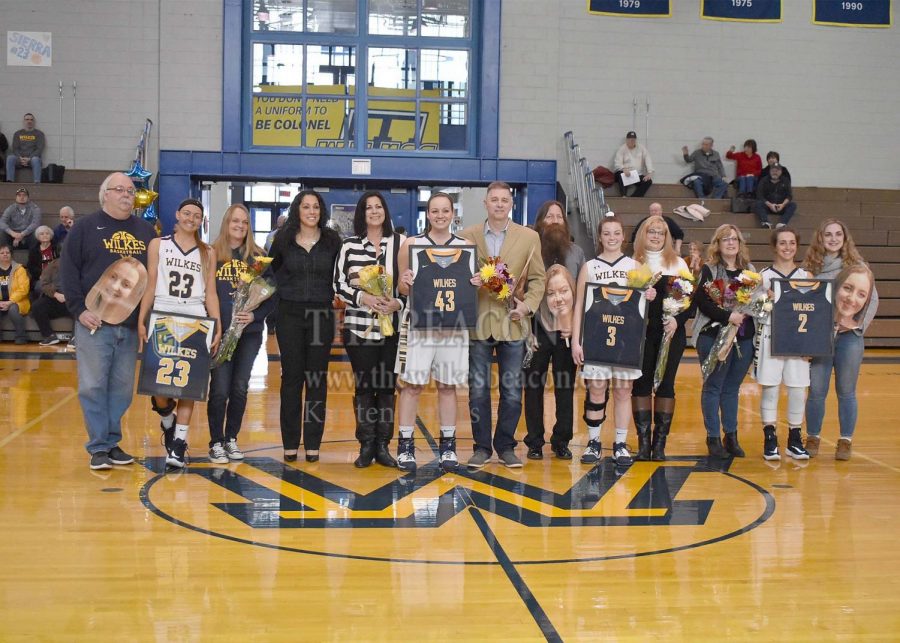 The Colonels graduated four seniors after another season that proved to be a step forward for the program in Tara Macciocco’s second season at the helm of the women’s basketball program. Alyssa Alfano, Gianna Roberts, Sierra Smith and Amber Grohowski all wore their uniforms for the final time in the teams tough loss to FDU-Florham.

Alfano played in 100 games over her four years at Wilkes, totalling 645 points, 241 rebounds, 172 assists and 105 steals. For her career she shot 30 percent on three-pointers and just over 78 percent on free throws.

“There were definitely a lot of ups and downs but I wouldn’t change it for anything” Alfano said. “I am so grateful for the people I have met here and the friendships I have developed. I will cherish these people forever.”

Another player who appeared in 100 games over her four years is Roberts. She led her senior class with 794 career points, 488 rebounds, 50 blocks and 53 steals. Her career field goal percentage was just under 43 percent and she shot just over 61 percent from the free throw line.

“I think the program grew a lot over the past four years. We didn’t start with any wins in the MAC or in regular play,” Roberts said. “I think we grew as a team and have developed a culture. I feel like I’ve really developed a family environment here. I’ve made a lot of friends and I’ve had a lot of great experiences during my time here.”

Smith appeared in 64 games in her years at Wilkes and returned from a tough injury last season to play this year. She ended with 179 points, 92 rebounds and 47 assists. She also had the responsibility of being a dual-sport athlete, also playing volleyball.

“I feel as if we have become a more family oriented team. This team has become bigger than basketball,” Smith said. “We are all very close, and I feel like that was part of the value I have added to the team.”

Another dual-sport athlete was Grohowski, who starred in field hockey and quickly made the transition onto the court all four years. She appeared in 69 games in her career, totalling 55 points, 19 assists and 30 steals.

“I met a lot of my lifelong friends here, and a lot of my teammates have had a big influence on me whether they know it or not,” Grohowski said. “They impacted my life. I hope that we left a more family oriented culture within the team. I think we all consider each other family and that is a great thing.”