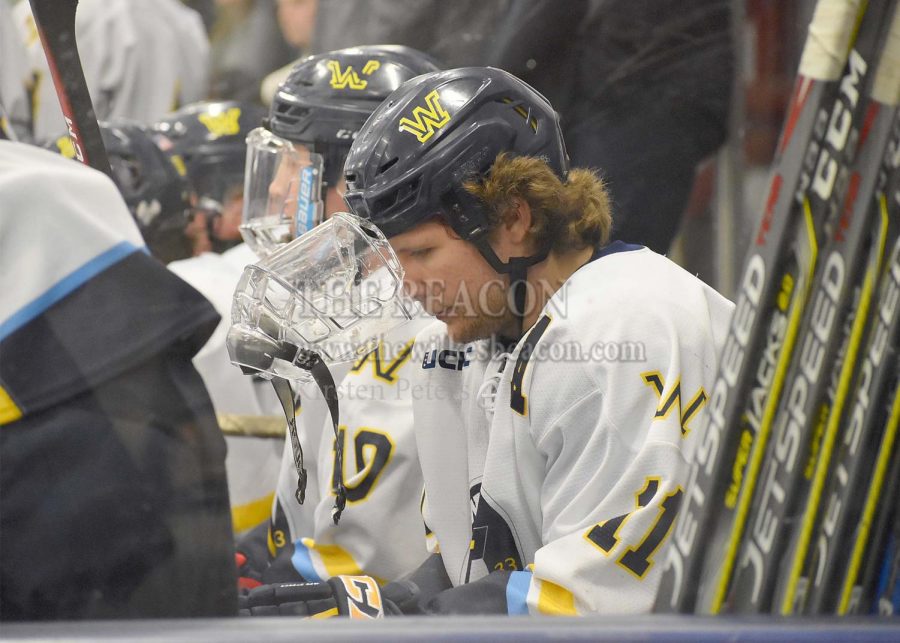 Top goal-scorer Donald Flynn and the Colonels wait for Wednesday’s results to see who they host in the first series of the UCHC playoffs.

The previous weekend didn’t go the way the Colonels had planned after falling to Nazareth and Utica, however, the team still had some good news. Wilkes will head into the United Collegiate Hockey Conference (UCHC) playoffs as a two seed, meaning they will avoid the first round.

Wilkes fell in both games of their road trip. On Friday, Wilkes lost 4-2 to Nazareth after having 61 penalty minutes. Tyson Araujo and Nick Fea scored for the Colonels while Donald Flynn, Dylan Kuipers and Michael Gurska picked up assists.

The game against Utica wasn’t any better, as the Colonels fell 5-1 with their lone goal coming from Flynn. He moved the puck in front of the net and a Pioneer hit the puck in his own net.

Despite the lopsided score against Utica, there were still positives to take away from the game.

“I think we knew what to expect with them, but it’s different to hear about it and then actually see it,” Wilkes coach Tyler Hynes said. “Overall, I thought we played a good hockey game. If you look at the penalty differential, which I didn’t think were bad calls, but we just have to do a better job staying out of the box.”

“Coach (Ryan) Secor really had a great game plan. He drew up how they break out, and we knew they were going to drop pass and how they set up so we can attack off those areas,” said Joey Pasquini, one of Wilkes’ top penalty killers. “We have been working on rotations. Usually, the power play will switch and try to catch us off guard with odd man opportunities. We have been working on our communication and how to switch off top of those.”

The penalty kill has been something the Colonels have looked to improve throughout the season. And like Pasquini, Hynes credits this to his assistant coach, Secor.

“He has been working with the penalty kill a lot, and they really stepped up. I’m very proud of them,” Hynes said.

The improved penalty kill will be important for Wilkes heading into the post season. In the second season of the program’s history, this will be the first time the Colonels will be in the UCHC semifinals. They will have to wait to see who their opponent is though, as Wilkes secured a first-round bye.

The first round will be No. 3 Stevenson hosting No. 6 Nuemann and No. 4 Elmira hosting No. 5 Nazareth. These games are a one-game-play-in, with the higher seed playing Wilkes and the lower seed playing Utica over the weekend in a two-game series.

For the two-game series, if the teams are tied, they will play a mini game that takes place 15 minutes after the end of the second contest. The mini game is separate, so teams can make lineup changes.

This mini game will be a 20-minute game, in which the team leading at the end will win the series. If they are tied, they will play 20-minute sudden death overtimes until a goal is scored.

“I’m pumped! After a loss like this, I’m a little less excited, but after I get on the bus and get some perspective on this, we do have a lot to look forward too,” Hynes said. “I told the guys in the room after the game, it may feel like the end of something, but it’s the start of something else and that starts Monday.”

Wilkes will head into the tournament as the second seed, and will likely play either Stevenson, Elmira or Nazareth. Going by the favorites and seeding, Stevenson appears to be the Colonels most likely opponent.

“I think there are four teams in the league this year that are the team to beat,” Hynes said. “You can look at any of the teams and say that this team has this, or this team has that. There is a lot of different ways to look at it, and I wouldn’t say there is a team we would prefer to play because we can’t control that, but I would say we feel comfortable with any of those teams.”

The Colonels owned the season series with Stevenson, going 2-0, including a 6-0 win at home and a MAC Championship. Against Elmira and Nazareth, Wilkes is 1-1 against each.

“It isn’t going to be easy, and I think the score against Stevenson the last time we played them will be something we have to address to the team,” Hynes said. “We have to know that it is not going to be that easy or lopsided again because that is a team with heart and grit.

“Elmira is a team that is older and talented, with the best power play in the country. It really is a case of pick your poison.”

The weekend’s picture will be set after Wednesday, when Stevenson and Nuemann play. The top four teams have all been in the USCHO.com top 15 rankings at some point this season, and all possess the ability to come away with a UCHC Championship.