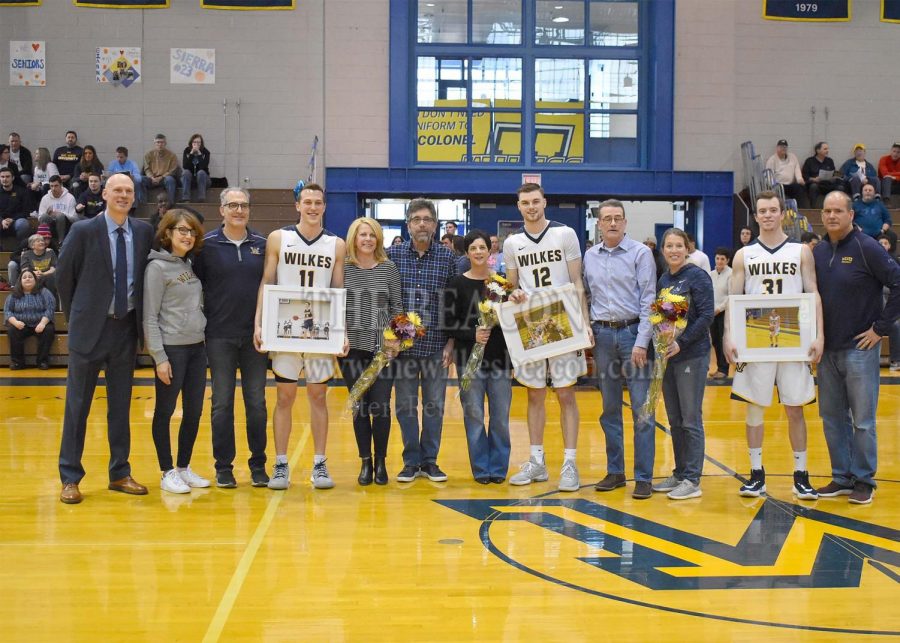 It was the final game for senior guards Rob Pecorelli, Mark Mullins and Brady Wing would wear a Colonels uniform.

During the past four years, Mullins and Pecorelli have had a drastic impact on Wilkes basketball.

“Rob and Mark have had an impact on the younger players through hard work,” Wilkes coach Izzi Metz said. “They are always playing the right way, and consistency.”

During Mullins four years at Wilkes, he has racked up quite the resume. He scored 1,288 points, 640 rebounds, 132 steals, and 300 made free-throws. Mullins ranks in the top seventeen all time in all of the previous categories for the Colonels.

In addition to dominating for Wilkes, Mullins has also been named to the Academic All-MAC team his junior year, honorable mention All-MAC his sophomore and junior seasons, two MAC Freedom player of the week awards, and was named the ECAC Division III North Co-Player of the month for December of 2018.

“I was just trying to set an example for the younger guys. I’ve had a lot of ups and downs throughout the years, but I have put forth consistent effort,” Mullins said. I hope that is what guys learn from me.”

Mullins has been a consistent force for Wilkes averaging 14.6 points per game and 6.8 rebounds per game.

Pecorelli also has had a dynamic career at Wilkes University. Like Mullins, Pecorelli has written a long history during his time at Wilkes. He has scored 1,400 points, 202 made three pointers, 133 steals, and 296 made free throws. Pecorelli ranks top eleven all time in those categories.

“I think the biggest thing I’ve left is how to be a leader and showing the younger guys what to do with conference play and how to persevere through hard times,” Pecorelli said. “This was a great year, I’m happy I came to Wilkes and I’m thankful for everything.”

Throughout his career he has seen a lot of ups and downs, his ability to keep moving through tough times is what he believes will be the biggest thing he leaves behind.

“For four years they were consistent leaders and winners,” Metz said. ”I always say this whenever a player leaves, whether they are a five point scorer, ten point scorer, twenty point scorer, or didn’t score, you don’t immediately recover from their legacy and impact.”

The impact that Mullins and Pecorelli had on the Colonel basketball program will forever be remembered. Their legacy and level of play will be forever in the record books.

In their final game of their career, the power duo of Mullins and Pecorelli was noticed on the court, however the hunger from FDU Florham outpowered the dynamic duo.

Wing is the final senior for the Colonels. He is a graduate student and this was his only season with Wilkes. For his collegiate career, he shot 66 percent from the field in his lone season. He had his first start on senior day and made a three-pointer, sending the crowd at the Marts Center into a frenzy.