WREST: Medrow, Almkey win decisions in loss to No. 16 Ithaca 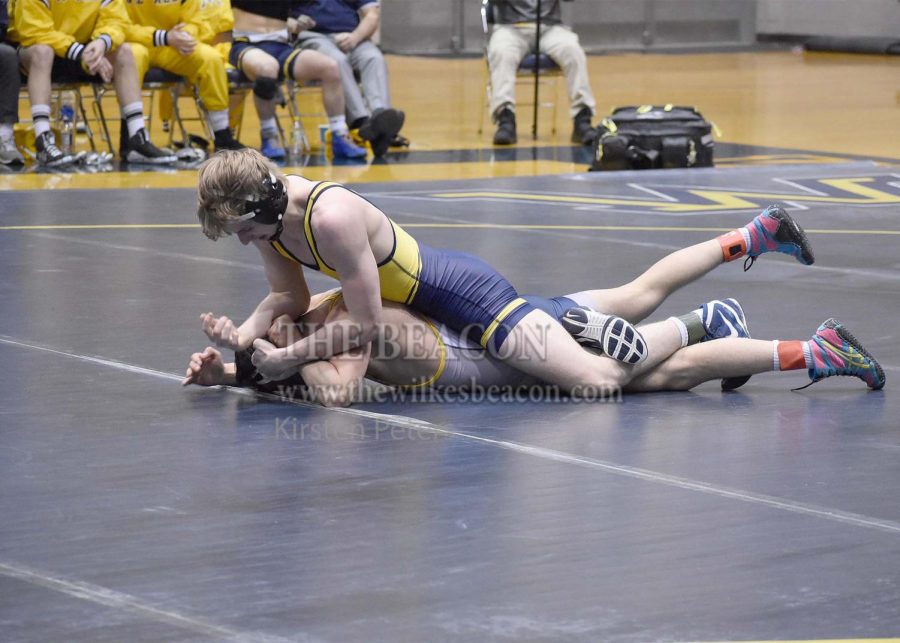 Senior Kyle Medrow attempted to work a power-half against Tito Colom in the 141 lb. weight class, pulling out the 2-0 decision.

WILKES-BARRE, Pa. — In facing a ranked opponent, only two Wilkes upperclassmen were able to pull off victories in Friday’s 41-6 loss against Ithaca College.

“They’ve got a lot of experience,” shared head coach Jon Laudenslager of Wilkes’ opponent. “They have six guys who have been to the National Tournament. They have a lot of juniors and seniors in their lineup, and we have mostly freshmen and sophomores.”

Senior Kyle Medrow put Wilkes on the board with a 2-0 decision over Tito Colom at 141.

“The team really helps me stay motivated while I’m out on the mat. Hearing them cheer for me keeps me going,” said Medrow.

Medrow and Colom went scoreless through two periods before Medrow chose top and rode Colom out of the final period.

Following Medrow, the Colonels had to wait until the 197 lb. weight class for their second victory of the night.

Junior Moustafa Almeky put three more points on the board for Wilkes, earning a 6-2 decision win over Dymir Davis-Carruth.

“I knew that these guys (Ithaca) train well, and that we train well,” said Almeky. “These are guys that are always going to stay in good position. We had to stay in good position with them, beat them to our shots and get them tired. I think that’s something that both Kyle and I, and a lot of the guys who also lost their matches, did out on the mat. We can’t be too ashamed of how we did tonight.”

“They wrestled really good on top,” said Laudenslager. “At the end of the day, if you can ride legs and keep a guy down — just when you’re on top — it limits any points they can score.”

Before regionals are officially on the horizon, the Colonels have to face crosstown-rival King’s College on Friday, Feb. 21 during Senior Night.

“We’ll get their best,” said Laudenslager of King’s. “They’re a natural rival. They’ve got some guys coming back, so they’re going to have a full lineup now. I think it’s going to be a good week of practice, and we’ll learn from this match against Ithaca. We’ve gotten better all year long as a young team.”