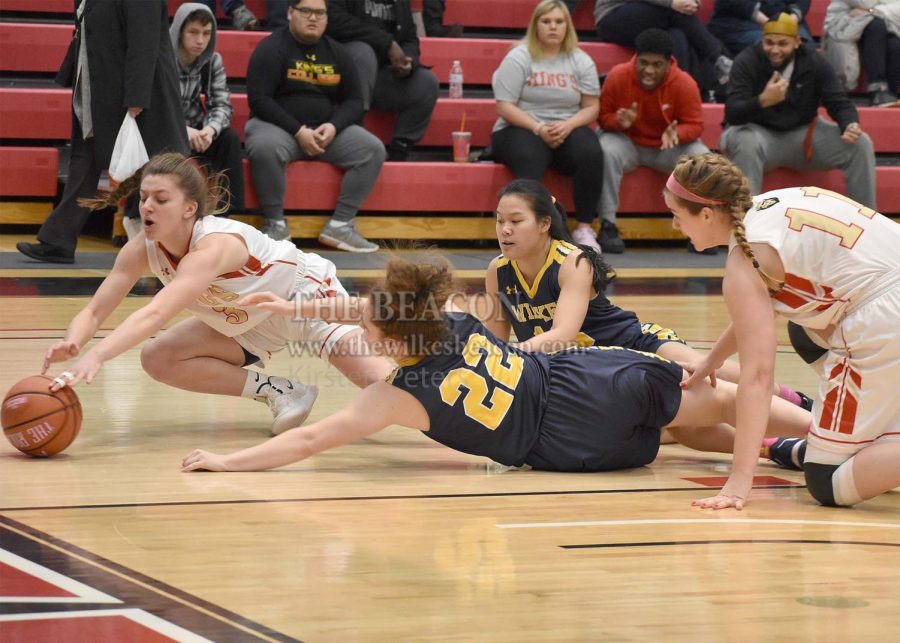 The Colonels tasted a comeback with a 17-0 scoring run in the second half that cut Wilkes’ deficit to 11 before King’s reawakened their offense.

WILKES-BARRE, Pa. — The Colonels came into rivalry week looking to pull off upsets against two of the top three teams in the MAC Freedom, Misericordia and King’s.

Rebecca Prociak and Mackenzie Yori had big games for King’s as they took another step towards securing a spot in the playoffs by downing Wilkes, 95-78.

“We were making shots, and even though we went through that dry spell, the fact that we came in with all that emotion of senior day and the crowd it carried us through,” King’s coach Caitlin Hadzimichalis said. “We are starting to get back to what works and building momentum.”

The Monarchs had lost four straight games before picking up back-to-back wins against Delaware Valley and Wilkes.

King’s built a comfortable 28-point lead with 3:35 left in the third quarter.

Wilkes came back with an answer though. After trailing by double-digits most of the game, the Colonels used a 17-0 run to get back into the game.

“I’m so proud of our kids because we fight until the final buzzer,” Wilkes head coach Tara Macciocco said. “They play as hard as they can, and they did a great job getting back into the game.”

After their lead was cut to 11 points, the Monarchs settled down and kept the lead over 10 for the remainder of the game.

Prociak continued her dominant campaign with a double-double. She led the team with a game-high 25 points and 10 rebounds. She also had five blocks, seven assists and two steals.

“We just try to play together,” Prociak said. “We need to start doing that again. Like when they double me, I try to kick the ball out.”

“We need to clean up the defense and do what we do best,” said Hadzimichalis. “These last few games have given us confidence and we are getting back to doing what works.”

King’s will have a critical game against Misericordia on Tuesday as the Monarchs will continue to push for the second seed in the MAC Freedom.

“I just really have a drive to win and I know we didn’t get that tonight,” Babcock said. “I feel like effort is a big part of that, and when one person gives 100 percent it goes on to the rest of the team.”

Babcock helped spark the Colonels in the second half and fueled their 17-0 run that got them back into the game.

“She’s fearless. She is competitive and goes out there no matter what,” Macciocco said.

Wilkes has two home games left on Tuesday and Saturday to close out its season.