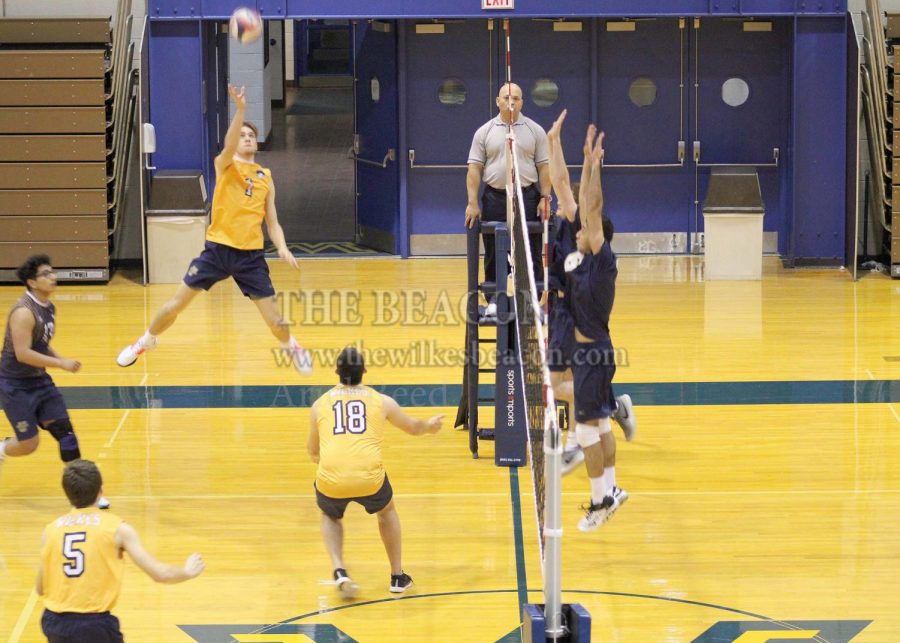 Outside hitter Zach Evans (1) recorded seven kills and two blocks in Wilkes’ 3-0 sweep against Neumann University in their season-opener on Tuesday, Jan. 21.

The men’s volleyball team is starting off this season with record-breaking momentum from last year.

In their previous season, the Colonels reached their first double-digit win record. This is the first time Wilkes has accomplished this feat within their four years as a program.

Czopeck has brought in skilled freshmen from various regions to improve upon the team’s previous record-breaking season.

“Zach Shay and Casey Shipman are freshman setters who will be leading our offense,” said Czopeck about the young talent on his 2020 team. “Both come from quality high school programs that can offer us two different offensive perspectives.”

In addition to Shay from Bethlehem, Pa. and Shipman from Hershey, Pa., Czopeck is optimistic about three other fresh faces on his roster. Zach Evans from Nescopeck, Pa., Randall Rykiel from Glenn Burnie, Md. and Konnor Pierce from Souderton, Pa. are standout newbies as well.

“Randy brings us the advantage of height at 6’6”. He is rapidly learning the speed of the college-level game,” shared Czopeck. “Zach Evans out of local Berwick High School also brings an added dimension to our offense as an outside hitter.”

Czopeck has wasted no time utilizing his young players. In the starting lineup, four of the six starters are underclassmen. Not to mention that nine of the thirteen members of his team are either first or second-year players, leaving his team with only a handful of experienced players.

However, Czopeck is forward-thinking and excited about the diverse players he has brought in and how they will develop throughout the season.

“As a young team, we will continue to learn and get stronger,” explained Czopeck. “Our schedule offers the opportunity to develop before we get into the competitive Mid-Atlantic Conference, already being recognized as a top conference with three nationally ranked teams. We will be battling for one of the five playoff positions.”

Wilkes has started their season with a 2-2 record. Their wins come from competitions against Neumann University and Purchase College. The Colonels exploded against Neumann, sweeping them easily in three sets.

For the first game of the 2020 season, Wilkes’ offense was powered by junior middle hitter Cole Hefner and sophomore outside hitter Andrew Potter.

Hefner and Potter paced the Colonel offense with nine and eight kills, respectively. Shay, a freshman setter, debuted his college career with 32 assists and four digs.

Shay was not the only freshman to make an impact on the evening. Evans, an outside hitter, and sophomore middle hitter Ethan Speicher recorded seven and five kills, respectively.

Wilkes’ defense played a big role in the game that evening as well. As a team, they held Neumann to a -0.13 hitting percentage. This effort was fueled by Evans and Speicher, who tied for a team-leading two blocks on the night.

The Colonels’ second win of the week was also a 3-0 sweep over Purchase College. In this match, middle hitter Rykiel and Potter led the team with eight and seven kills, respectively.

Shipman, a freshman setter, started his Wilkes career with 24 assists and six digs in the competition while Shay set a career-high 40 assists to help carry the Colonels over the Panthers.

Again, Wilkes’ defense played an instrumental role in the win. This is the second time the Colonels have held their opponent to a negative hitting percentage: -0.19. The team had eight blocks total on the evening, six of which came from Hefner.

Throughout the course week, Wilkes fell to Elizabethtown (0-3) and The City College of New York (3-1) to start their season with a balanced 2-2 record.

With young talent and an optimistic approach, Wilkes will return to the court on Friday, Jan. 31 against Immaculata.