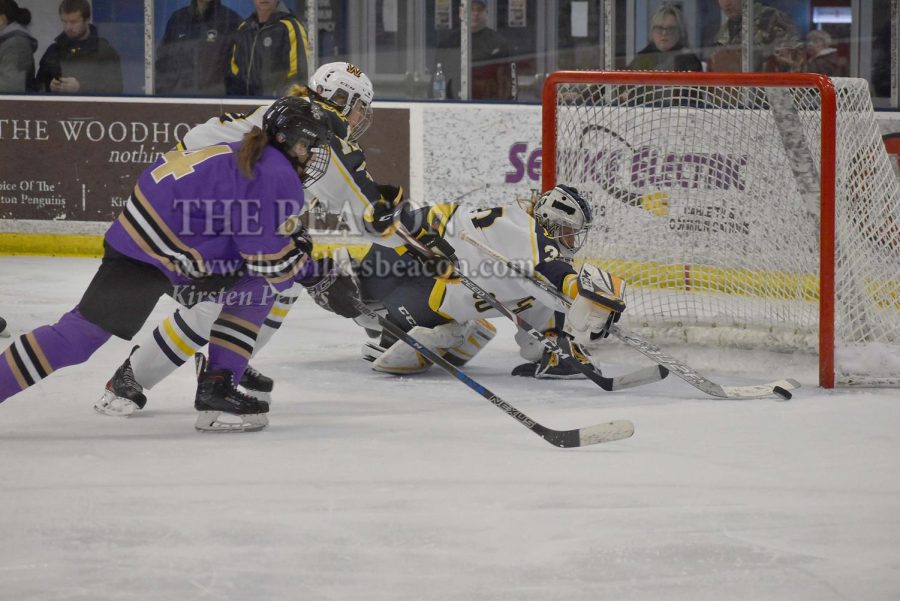 With two conference games this weekend, the women’s ice hockey team was unable to be victorious in either showing.

“They faced a ton of challenges this weekend,” said head coach Earlå Utter, reflecting on the games from Friday and Saturday. “The biggest challenge was just doing the little things right.”

In the first of their two contests, Wilkes suffered a 7-0 loss to Nazareth College.

Despite the seven goals that made it past sophomore goaltender Allyson Joly, she had a notable performance by tying her season-high of 44 saves.

“We wanted to keep our energy level high,” said Joly.

Joly held the Golden Flyers to two goals in the first period, where Nazareth’s Nikolle Van Stralen opened up the scoring in the first and closed out the game with the final goal of the contest to be the only skater with two goals.

With two goals on the board in the first period, the Golden Flyers continued their momentum and took control of the game with an onslaught of four goals in a mere seven minutes to increase their lead to 6-0 in the second period.

Wilkes’ sophomore Ashley Murry suffered a two-minute penalty for holding that allowed Nazareth to cap off their impressive scoring efforts with their fourth goal of the period. Golden Flyer Keely Rose found the back of the net at 10:23.

Van Stralen rounded out the scoring with her second goal of the evening in the third period to conclude the contest.

Prior to the start of the third period, Utter urged his team to focus on winning battles. However, this was to no avail, as the Colonels were unable to put a goal on the board in the Golden Flyers’ shutout.

With another game on the line for the weekend, Utter urged his players to come back ready to play and have confidence in their abilities.

“I’m going to ask them to come back strong, play hard, win battles and not doubt themselves as much as they do sometimes,” noted Utter.

Despite the 7-0 loss on Friday, the Colonels did just as Utter advised and demonstrated a much closer contest on Saturday in their 2-1 loss to Utica.

Goaltending proved to be a strength in the contest, with sophomore goaltender Alexa Rango being an asset in front of the net. She recorded 47 saves.

As a testament to the sound goaltending, neither team was able to find the back of the net in the first period, notching 12 of Rango’s 47 saves.

However, the Pioneers took a 1-0 lead in the second period when Maddie Paydos scored off an assist from Holly Silva at 8:46.

Six minutes into the third period, the Pioneers increased their lead to two when Carolyn Whitney got one past Rango.

However, the Colonels cut the score in half with a goal by sophomore Kendall Castro two minutes after Whitney doubled the Pioneers’ lead. Freshman Brianna Stanton and sophomore Ashley Murry assisted Castro, who is only the second Colonel to score a goal in the four games Wilkes has played this season.

Although Castro’s goal was a momentum booster, the Colonels were unable to score again. Their record dropped to 0-4 followed the two losses on the weekend.

“We knew that both of those teams have a lot of good players that would be hard to play against, and we couldn’t control that,” said Utter of the opponents Wilkes faced this weekend. “But, we could control our effort and compete-level.”

By adjusting their attitude and altering their approach following Friday’s loss, the Colonels found themselves in a closer competition with the Pioneers. Utter asserts that the team will prepare for their upcoming contests by working on their offensive zone and powerplays.

“The attitude going ahead is to just keep working hard and trying to make the most of the opportunities we are given,” said Joly.

Wilkes plans to continue on this trajectory with two chances against Post University on Saturday and Sunday at the Toyota SportsPlex.