Crosstown rivals come together off the field for Beads of Courage 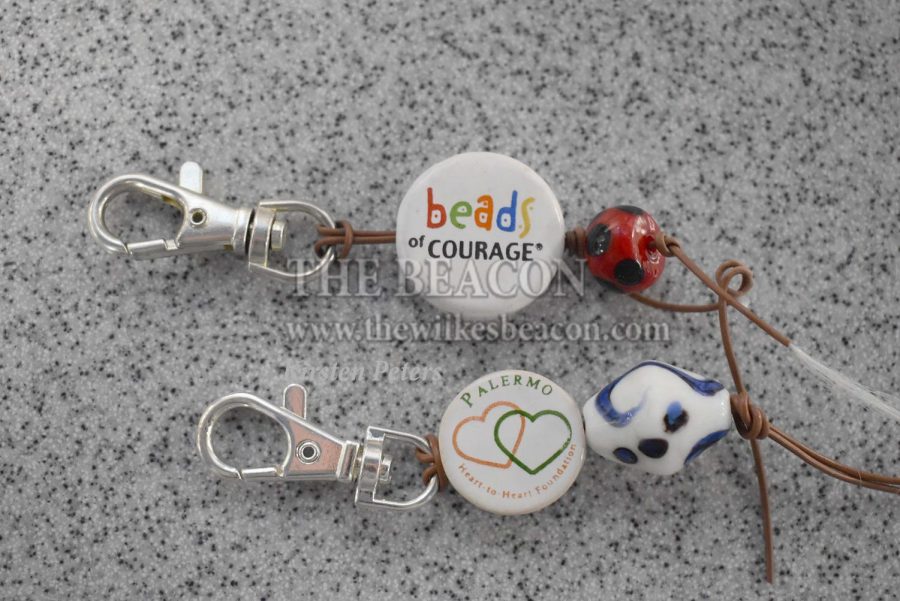 Wilkes football is participating in the Beads of Courage charity by displaying their beads on keychains or backpacks.

With the Mayor’s Cup on the schedule, the Colonels and crosstown rival King’s College had been anxiously awaiting their contest at McCarthy Stadium. Despite the rivalry, the opponents decided to team up to support the Beads of Courage Charity for the week prior to their coveted contest.

The Beads of Courage organization was founded to donate to those with pediatric cancer. With a nurse in Arizona looking for a way to inspire these children to remain faithful and continue fighting the disease, she decided to make beads the premise of her idea.

In order to help children fight through their long, pain-staking hospital treatments and overnight stays, football players at Wilkes and King’s have teamed up by wearing beads to send to these children. The players carry the bead with them for a week, and then send the bead with a note to the organization, who then transfers the bead to a child.

“It kind of fits into our rivalry,” shared King’s head coach Jeff Knarr. “For 60 minutes, it can get heated and intense at times. But there are a lot of joint efforts between the colleges throughout the years since there are a lot of intertwining communities. To get together for a greater cause is awesome. At Division III athletics, it’s more than the sport. You really are student-athletes. You can make a difference at a smaller scale and with something that you are passionate about.”

Beads of Courage is a non-profit organization that is dedicated to improving the quality of life for children and teens coping with serious illness, their families and the clinicians who care for them through Arts-in-Medicine Programs. The Palermo Heart-to-Heart Foundation has teamed up with Beads of Courage, which is the group that receives the beads from Wilkes and King’s.

This organization believes in creating an environment for caring transactions to transpire through communities and encouragement programs. That’s where Wilkes and King’s come in, selling beads to benefit their shared community.

The children affected by pediatric cancer who seek treatment from hospitals that participate in the Beads of Courage organization receive beads for going through mandatory procedures.

“I love that we get to offer a few words of encouragement to keep up the fight. Hopefully those words brighten up a child’s day when the receive their bead and note,” shared Wilkes head coach Jonathan Drach.

These beads serve as a reward to the kids for staying strong and for making progress in their treatments. It is common to see children crowned with beads — a physical representation of what they have been through.

“It helps tell their story,” said Knarr. “They get beads for blood transfusions, overnight hospital stays and getting shots. They reflect their personality. Whenever you see a child with a lot of beads draped around their necks, you kind of get a perspective of what they’ve been through.”

These beads demonstrate how much these children have been through. They get to wear their beads, read their notes from student-athletes and maintain hope for the future.

“It also gives them inspiration,” explained Knarr. “As a young child, they are scared of their treatments. But if they know they are getting a bead in return, they have the courage and strength to deal with what they need to. The beads represent milestones in their story and journey.”

Drach echoed Knarr’s sentiments, elaborating that these beads carry a significant weight for the children.

“The beads are a bright spot and a badge of courage in a dark time for children undergoing treatment for a variety of reasons,” noted Drach. “I believe that they let them know that they are not alone in a challenging time. Some of the strings of beads that children collect are flat out astonishing. It is a tangible item that represents their own personal fight.”

However, the teaming up of two rival schools off of the football field extends far beyond the sentiments of their coaches and impacts the student-athletes partaking in the cause.

For sophomore defensive back John Vanlenten, Wilkes’ participation is greater than football.

“I think two rival teams and rival schools coming together and putting everything aside to support a great cause in our collective community is really awesome, and it shows that we can do something beyond football,” said Vanlenten.

The Monarchs and Colonels decided to team up for this cause to generate more awareness from the collective Wilkes-Barre community.

Originally, King’s started contributing to this charity a couple of years ago. Wilkes decided to join forces with the Monarchs to get more hands on deck and get a broader reach in their shared community.

Promoting Beads of Courage at the Mayor’s Cup game gets the whole community involved which has a major impact on the players.

“It means a lot to me — being apart of something bigger than myself — it really is a humbling experience,” said Harrison. “It gives our team and King’s an opportunity to give back to the local community and to support a great cause. Our team is one big family and we have a great support staff. By doing a charitable event like this, it really represents who we are as a team.”

The Colonels are only in their second year of joint-contributing to this charity with the Monarchs, but intend to continue participating in this event together.

“It means a lot because it gives us a chance to give back to children and families in difficult situations, and it lets us step back and appreciate more because nothing is guaranteed in life,” said freshman offensive lineman Sebastian Cardelle.

Vanlenten expanded on Cardelle’s thoughts, stating, “Participating in the charity is a great thing for the team to do. We get to show some of the kids that are going through really hard things that there’s a huge group of guys supporting them and wishing them the best.”

Although there is a huge rivalry between Wilkes and King’s, the student-athletes have the power to make an impact on the hearts and minds of the children they send beads and notes to.

“When you become a coach, you enjoy being around and helping kids,” shared Knarr. “I felt like this was a perfect charity for us and our team to be involved in.”