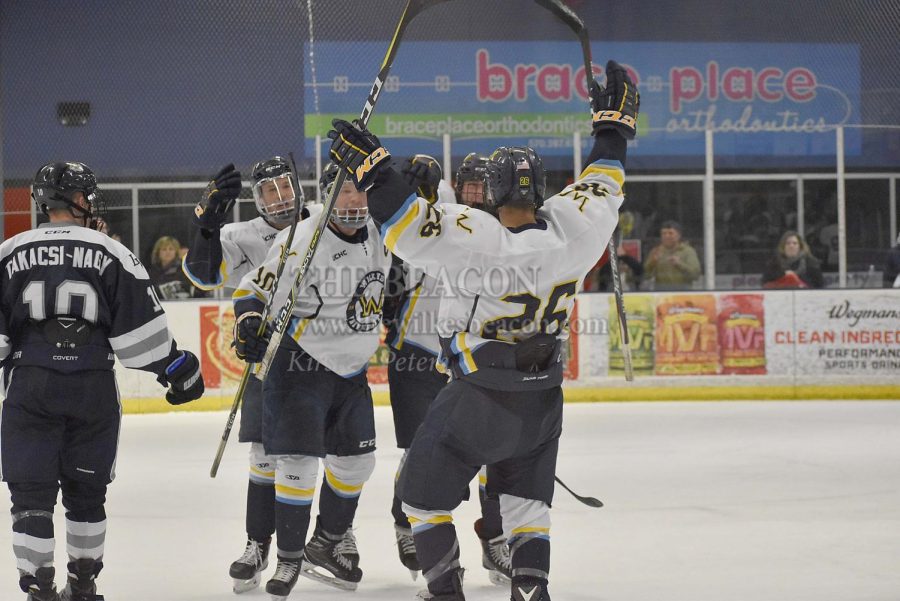 The Colonels celebrate after sophomore forward Joey Pasquini (No. 26) scores his first collegiate goal to tie the game at 3-3 in the third period.

This win also produced two other firsts for the Colonels: It was the first win as head coach for Tyler Hynes and the first win in goal in Michael Paterson-Jones’ college career.

Paterson-Jones got his first start against Lebanon Valley and recorded a total of 24 saves.

“Goaltending was strong, defense was strong, and then offense and the powerplay executed what they were supposed to do,” said head coach Tyler Hynes. “Overall, it was a really good positive weekend, and I was excited about the result.”

The game started out relatively fast-paced, with shots on goal from the Colonels and Dutchmen early on. Wilkes’ Paterson-Jones and the Dutchmen’s Henry Burns made several saves, each of which allowed the game to remain scoreless until the last minute of the first period.

At 19:07, junior Tyson Araujo put the Colonels on the board with assists from sophomores Ryan Galvin and Devon Schell.

The first period ended with both the score and the shots-on-goal favoring the Colonels, leading the game 1-0 and also leading in shots on goal 13-9.

At the beginning of the second period, Wilkes’ Danny Reidel took a penalty for interference and the Dutchmen used it to their advantage. Lebanon Valley’s Tino Alunni capitalized on this opportunity and scored a powerplay goal at 2:53, which tied the game at one.

Despite 12 shots on goal from the Colonels and nine from the Dutchmen, both teams struggled to find the back of the net in the second period.

However, this quickly changed in the third period when Alunni scored 40 seconds in. This was Alunni’s second goal of the game, and it allowed the Dutchmen to gain the 2-1 lead.

At 5:51, the Dutchmen increased their lead to two.

“Obviously, you don’t want to put yourself in a hole from the get-go, but I thought the positive was we really responded when we needed to,” reflected Hynes.

With the game coming alive, the Dutchmen’s lead did not last for long. The Colonels answered with Araujo’s second goal of the game at 7:07 with assists from Billy Berry and Michael Gurska.

Late in the final period, Wilkes’ Joey Pasquini changed the game — scoring the tying goal with an assist from Kuipers.

With the momentum building and time running out, the Colonels scored back-to-back goals in a 19-second time frame. Following Pasquini’s tying goal, Erickson scored what would become the game-winner with less than two minutes left in the game.

“There wasn’t really an approach,” said Erickson of his goal. “Jivan entered the offensive zone and made a gorgeous pass while I was on my way to the net. I just tried to get my stick on it the best that I could.”

The 4-3 victory produced Wilkes’ first win of the season, after falling last week to SUNY Canton 5-3 in the Colonels’ season-opener.

Wilkes also recorded back-to-back comeback wins with a 5-3 victory over Elmira on Saturday.

“I think the perseverance we showed during these victories stems from last season,” noted Erickson. “We’re a team that responds to adversity well and it allows us to make strong comebacks in close games. We’re comfortable in these situations, and we know that we’re never out of the game until the buzzer sounds.”

“I think that our success is due to the comfortability they have with each other. They’ve been a unit together for a while now,” echoed Hynes. “It says a lot about the belief our young men have in each other when there was no panic either night this weekend.”