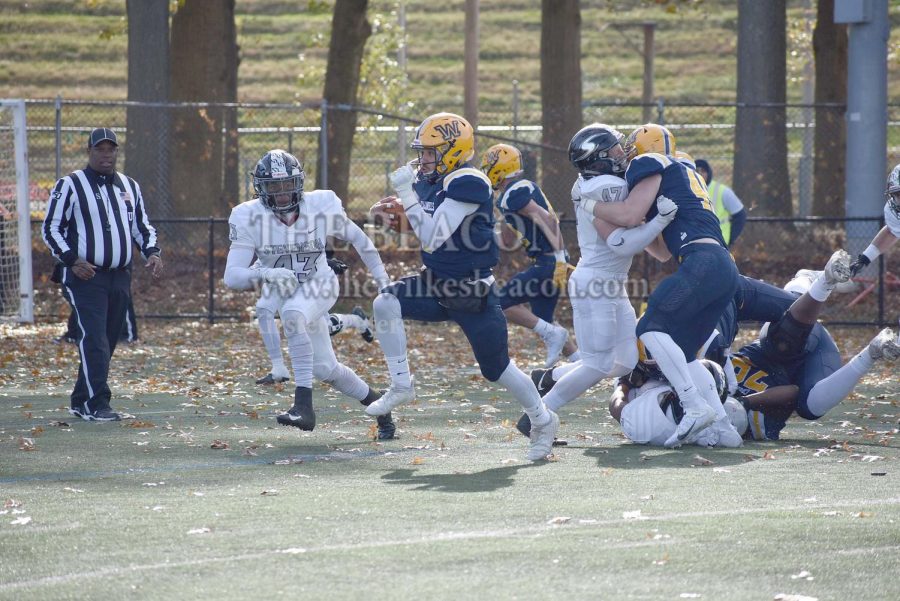 On a frigid Saturday afternoon, the Colonels suffered their second loss of the season against Stevenson. Despite the number on the scoreboard, Wilkes received help from other teams around the MAC to clinch a MAC/Centennial bowl game.

With King’s losing to Widener and Misericordia losing to Albright, the Colonels ensured they would have a top-four record in the MAC, ultimately meaning they will play in a postseason game.

In their second-to-last regular season game, however, the Colonels were off to a rough start against Stevenson. Wilkes fumbled the opening kickoff and surrendered a touchdown on the first play from scrimmage, suffering a 7-0 deficit in the first 12 seconds of the game.

“Obviously, going into a game anything can happen — even a fumble on the first play,” said senior quarterback Jose Tabora. “But you just try to maintain focus, don’t let it affect you in any which way, stick to the game plan and look forward to the next play.”

That’s exactly what Tabora did — he looked forward to the next play. In one minute and 34 seconds, Tabora was down the field and into the endzone for his own 63-yard scamper to tie the game at seven.

However, Wilkes’ turnover woes continued from the opening of the game, as they coughed up the ball via interception or fumble on their next four drives.

The Mustangs capitalized on three of the Colonels’ five first-half turnovers, resulting in 21 points and a 28-7 halftime lead.

“Just turning the football over so many times in the first half set us behind,” said head coach Jonathan Drach. “Some days you don’t pay attention to the small details, and that hurt us today. I think that you have to realize when you play good teams that do a great job of ripping at the ball, that kind of thing, that they did a better job at ball security than we did.”

However, Wilkes did receive a second wind after halftime. The defense forced a fumble on the first drive of the second half, leading to Tabora’s second rushing touchdown of the game to cut the Mustangs’ lead to 28-14.

On the ensuing drive, Stevenson suffered a fumble in a game that was filled with turnovers and mistakes.

With the Colonel offense struggling in the passing game, they leaned on the run game, slowly making their way down the field before Tabora rushed into the endzone for his third appearance of the day.

“We had our game plan during the week to attack them in the pass game, but things didn’t go our way,” explained Tabora. “I wasn’t making the best decisions, but I tried to make up for it in the run game. That first half killed us, and I take full responsibility for it. I didn’t have a good first half — I played horribly. But I tried to get it back in the second half.”

Tabora’s third touchdown cut the deficit to one touchdown with almost an entire fourth quarter to play.

“They put themselves in a situation going into the fourth quarter where we were in the game, and that’s what I asked them to do at halftime,” noted Drach.

The Colonels forced a punt from the Mustangs, but couldn’t put together the game-tying drive. After a 4:25 drive, Stevenson scored to make it a 35-21 game, taking the momentum out of the Colonels’ comeback attempt.

Wilkes turned the ball over on their next drive, and after a couple of first downs, the Mustangs opted to continue pushing for the endzone instead of kneeling the ball and letting the clock run out — adding insult to injury with a final touchdown in their 42-21 defeat.

“We have a lot to play for, and we still have had an unbelievable season,” said Tabora. “It sucks and it’s really sad that we lost, and we can pout about it, but at the end of the day, we have another week to play. We have a lot to prove and there’s a lot on the line. We just have to forget about this week, take your ‘L’ as a man, dust yourself off, get up and play next week.”

The Colonels look to reclaim the Mayor’s Cup after suffering a 45-0 blowout last year to King’s in their annual contest.