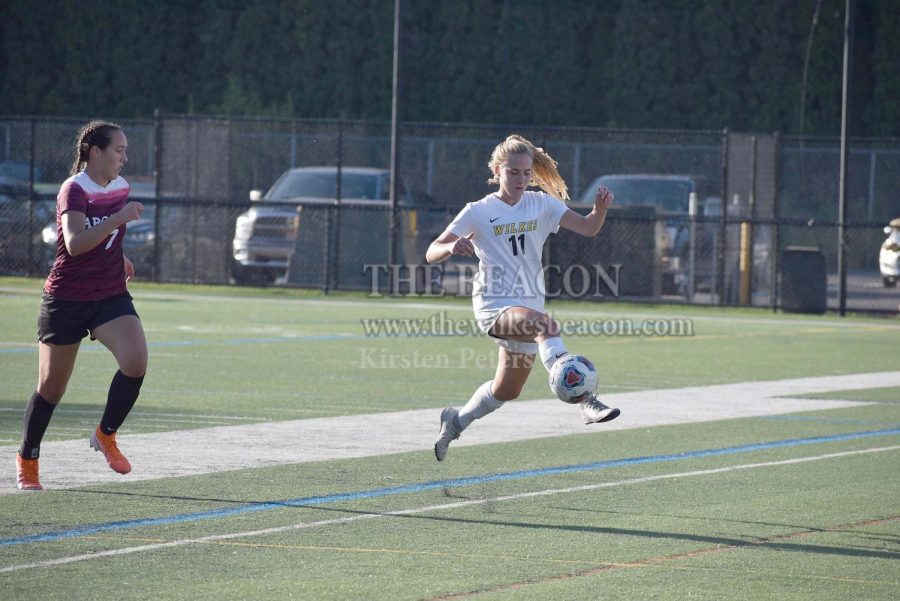 Senior Emily Egan jumps for the ball in the Colonels Sept. 21 contest against Arcadia. This past Saturday E. Egan passed to sister Jessica Egan for the second goal of Wilkes' overtime thriller against Eastern.

EDWARDSVILLE, PA – The Wilkes women’s soccer team found themselves in a double-overtime conference thriller against the Eastern Eagles on their Senior Day, Saturday afternoon.

The Colonels (5-6-1, 2-2 MAC Freedom) snapped their two-game conference dramatically losing streak, tying the game in the last minutes of regulation before taking home the victory in double overtime against the Eastern Eagles (7-6-1, 2-1-1 MAC Freedom).

Senior Jessica Egan opened the scoring in the ninth minute, with a chip shot to take a 1-0 lead after some excellent ball work from fellow senior Haley Evans. The Eagles took early control of the match, however, with Nicole Weenink putting home a shot from the right side of the box into the goal in the 21st minute and then breaking away from the Colonel’s defenders to notch her second goal in the 20th minute.

The Eagles outshot the Colonels 10-6 in the first half, but the tables turned in the second. The Wilkes defense held the Eagles to only two shots in the second period, which bought enough time for late-game heroics from the Egans. In the 88th minute, senior Emily Egan passed it to sister Jessica Egan who put it home for her second goal of the day and Emily Egan’s first assist to tie the game up and send it into overtime.

Neither team budged in the first overtime, but the Colonels put away the game in second overtime. They outshot the Eagles 4-0 in the final minutes, the last shot being senior Delfina Bracchi’s game-winning goal into the upper left corner at the 108th minute to take home a key conference victory on Senior Day.

Bracchi led all Wilkes scorers with four shots on the evening, while Jessica Egan had three of her own. Senior goalkeeper Samantha Cecere had four saves in a victorious effort.

Zoe Stepanski’s penalty stroke goal with less than ten minutes to play in the fourth quarter proved to be the difference as host Wilkes University escaped with a MAC Freedom victory over Stevens University Saturday afternoon at Schmidt Stadium.

With the win, Wilkes improved to 9-7 overall and evened its conference mark at 2-2. Stevens dropped to 9-6 overall and 2-2 in league games.

The teams went scoreless through the first three quarters and into the final frame with Stevens controlling most of the play in its offensive end outshooting Wilkes 21-3 throughout.

Damgaard recorded her second career shutout making several game-saving stops including the big one late in the fourth.

Senior Kyle Bentz tied the game in the 79th minute for the Wilkes University men’s soccer team on Senior Day at Bruggeworth Field but it was visiting Eastern University that scored the game-winner 2:05 into the second overtime period to leave with the Middle Atlantic Conference Freedom (MAC Freedom) victory Saturday afternoon.

Wilkes dropped to 6-6-2 overall and 1-3-0 in the MAC Freedom while Eastern improved to 8-7-1 overall and remained unblemished in conference play at 4-0-0.

Wilkes pressed for the go-ahead goal in regulation as they had the next three shot attempts in the game off the feet of Seth Fowler, Matthew Horwedel and Cole Hefner.