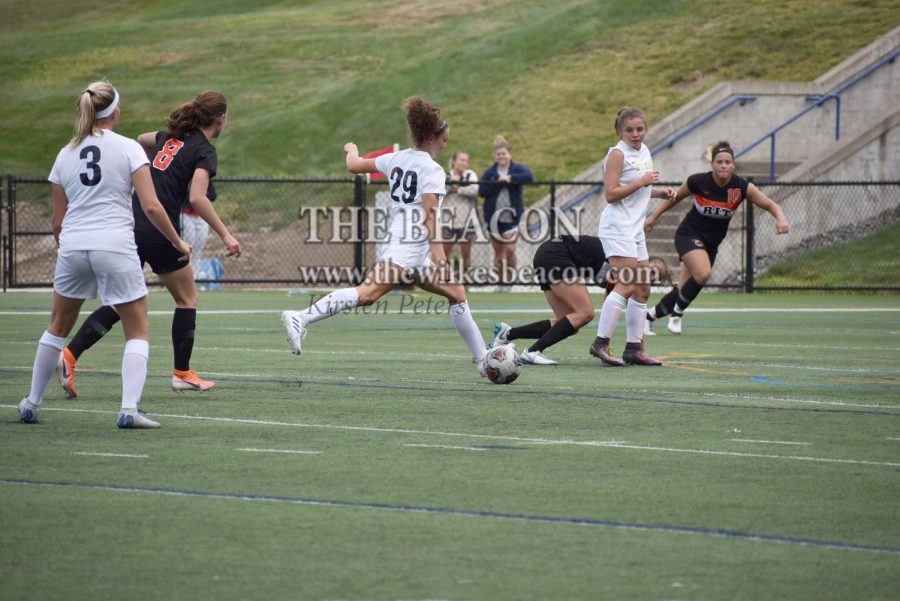 Sophomore Emily Bidelspach tied the game at 1-1 on a ball from 20-yards out that beat the Tigers' goalie early in the second half.

EDWARDSVILLE, Pa. — On Sept. 7, Wilkes was defeated by the Rochester Institute of Technology (RIT) Tigers in a brutal contest where a call by the officials decided the fate of the game.

In the first half, the Colonels struggled to overpower RIT’s offensive line. RIT pressed the Colonel defense, led by juniors Niamh Harkins and Catherine Gregoire, for the vast majority of the half.

“I felt that we hung in there against a very tough opponent,” said Harkins. “We had our opportunities to put points up on the board, but sadly some shots didn’t fall.”

One of these opportunities occurred when freshman forward Kiele Reifenstahl had control of the ball. Her powerful shot attempt rang in a smidge too high at the 37-minute mark of play. This was Wilkes’ best attempt to score in the first half, leaving the Colonels scoreless after 45 minutes of battling the Tigers.

However, the same could not be said for RIT. Two minutes after Reifenstahl’s attempt, the Tigers’ Abbey Saia had a shot attempt of her own – one that found the back of the net and gave RIT the 1-0 lead before time expired.

Heading into the second half, Wilkes was determined to not go down without a fight. Thirteen minutes later, sophomore midfielder Emily Bidelspach netted a shot from 20-yards.

This goal proved to be a momentum shifter, allowing the Colonel offense to click and find a groove. As a result, Wilkes began firing off some incredible shots. In fact, sixty-three percent of Wilkes’ shot attempts occurred after Bidelspach’s goal.

Despite the Colonel shift to a more aggresive approach, Tiger goalie Alyssa Salls was unrelenting in her efforts to hold Wilkes to one goal.

These two chippy teams battled for the next goal until the 81st minute of play, when Wilkes’ goalie Samantha Cecere stepped out of the goal to pounce on the ball shot by RIT’s Kayla Grossman.

However, Grossman continued to battle for the ball, chipping away at Cecere’s grasp. With Cecere on the ground, a Wilkes defender stepped into goal. The ball deflected off her upper thigh, bounced off the crossbar and landed again in the hands of the Cecere.

Wilkes believed the shot had been blocked and RIT believed Grossman had scored.

After a wild deliberation between the referees, they decided to count what would eventually become the game-winning goal.

Boos were heard from the Colonel stands, with fans questioning why the decision took so long if the ball had, in fact, visibly crossed the goal line.

Despite a last stitch effort from the Colonels, RIT’s controversial goal allowed them to edge out the 2-1 victory. This was Wilkes’ first loss of the season, dropping their record to 1-1-1.

“We never gave up,” said Gregoire, one of the standout Colonel defenders. “Even when certain calls didn’t go our way, we had the determination to dig deeper and keep fighting. It was a physical game, and I think it was a good test that will help prepare us for later on in the season.”

This loss cannot be solely atrributed to the questionable call over the Tigers’ second goal, as there were three controversial calls during the game that could have shifted the momentum in the Colonels’ favor.

Although the Colonel fans would like to blame the game on the officials, head coach John McNichol asserted that these controversial calls should not have impacted Wilkes’ ability to play.

“Any time there is inconsistency, both teams have to deal with it,” said McNichol. “We scored a nice goal with the pressure we were under. Sure, there were some inconsistencies, but I don’t think it affected the game too much.”

Not only could Wilkes have benefited from some different calls, but RIT could have as well, making the “what-if” game a sticky one to get wrapped up in.

One thing was for certain though: the strength of junior defensive duo Harkins and Gregoire limited the number of goals RIT was able to score.

“I tried to stay connected as a defensive unit and make sure we communicated our runs effectively, as well as pushing up together when we transitioned up the field,” said Gregoire on the dynamic duo’s game plan.

The two helped to stop the forward progression of almost all the Tigers’ attacks.

McNichol praised the pair, stating, “They’re fantastic centerbacks – two of the best in the region. They do an outstanding job.”

Despite the recognition of the Colonel defense, the game goes in the books as a loss.