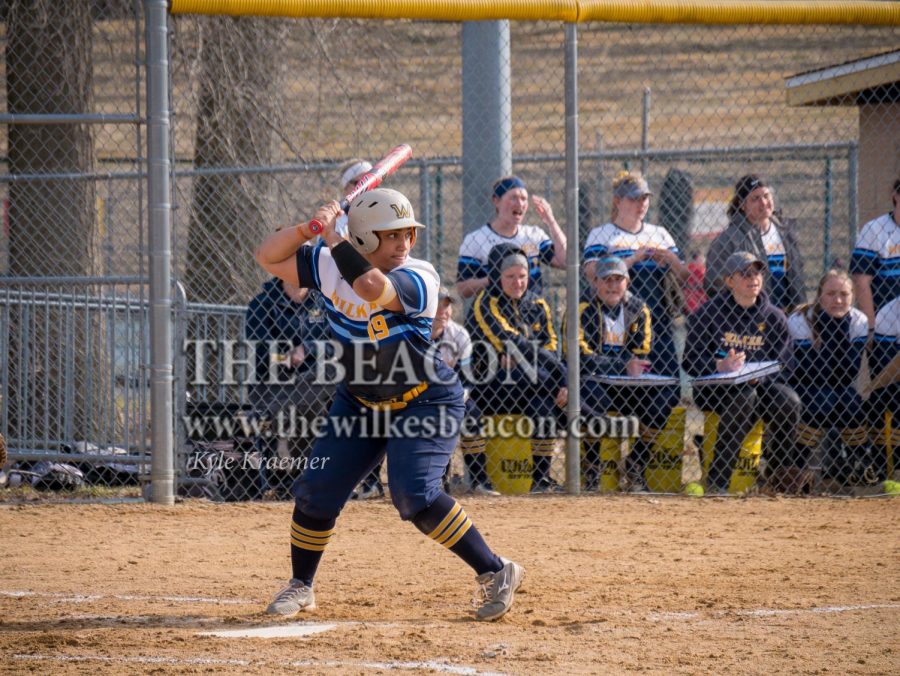 Senior Caitlin Brown reached the 100 hit milestone last Wednesday in game one of the Colonels doubleheader against Keystone.

EDWARDSVILLE, Pa. — The Wilkes University softball team took care of business Wednesday night as they sweeped Keystone College in a doubleheader, 14-7 in game one, and 4-3 in game two.

Freshman Rhiannon Aurand started on the mound for the Colonels in game one. She entered the game with a 2-1 record.

The Colonels did not have an ideal start in the top of the first inning as Keystone College got a early single and a bunt which had a bad throw to the base and allowed two Keystone runners to advance into scoring position.

Shannon Lloyd for the Giants slammed a three run home run to give Keyston the 3-0 lead. Aurand was able to bounce back and finish the top of the first inning without giving up any more runs.

Wilkes would answer back in the bottom of the second inning, when Haley Welker’s sacrifice fly to bring Caylee-Mae Williams home which cut the Colonels deficit 3-1.

In the third inning, Sarah Gibson hit an RBI past second base sending Haley Boyd home reducing the Keystone lead 3-2.

Gab Giordano moved Gibson to second with a sacrifice bunt. Emma Stauffer, who was next up at bat, was hit by a pitch, putting runners on first and second base.

Caitlin Brown reached a milestone in the third inning as she recorded 100th collegiate hit in the bottom of the third.

“Just being able to contribute is a big part of it just moving baserunners and just doing everything I can here to be able to produce for my team and help my team win,” said Brown reflecting on her 100 career hits at bat.

Keystone scored again in the fifth inning to take a 4-3 lead.

Celine Podlesney was put in as relief for the Colonels and let up a two more runs.

Giordano started a huge fifth inning things off with a homerun. Welker then crushed a three run homerun, regaining the lead for the Colonels 7-6.

Sydney Cogswell, Gibson and Giordano all contributed to the scoring spree in the bottom of the fifth inning, extending the Colonels lead 10-6.

Keystone was only able to get one more run in the top of the sixth inning before another barrage of Colonel runs put the game out of reach for the Giants.

“We definitely adjusted much quicker to the different speeds of pitching which was good, we got off to a slower start in the first inning and the team adjusted and worked late….started hitting the ball to the right side and that’s when we’re effective,” said head coach Sarah Leavenworth (Maulorico) on the slow start for the Colonels.

Junior Gracen Staunton took the mound for the second game of the double-header.

The Colonels got an early lead in the first inning, 1-0.

Staunton let up a two run home run in the third inning which gave Keystone the lead 2-1, shortly after the Giants increased their lead to 3-1.

“They weren’t afraid to attack the ball….in the early counts they were swinging a lot, and they were able to get pretty solid hits,” said Staunton.

The Colonels managed to fight their way back in the fourth and fifth inning with a two run RBI from Jordyn Kondras which sent Brown home, Keystone still led 3-2.

Gibson and Staunton both singled to start of the bottom of the sixth inning. Jumalon hit a RBI triple bringing home Staunton and Gibson, putting the Colonels back in the lead 4-3.

Staunton finished off the last two innings strong and did not allow the Giants to come back. Despite having a runner in scoring position in the top of the seventh inning.

“I was just making sure I hit my spots, make sure I’m doing what I’m supposed to so it will help my teammates behind me as much as possible,” said Staunton.

With the doubleheader sweep, the Colonels improve to an 8-7 overall record, 0-2 in conference play.