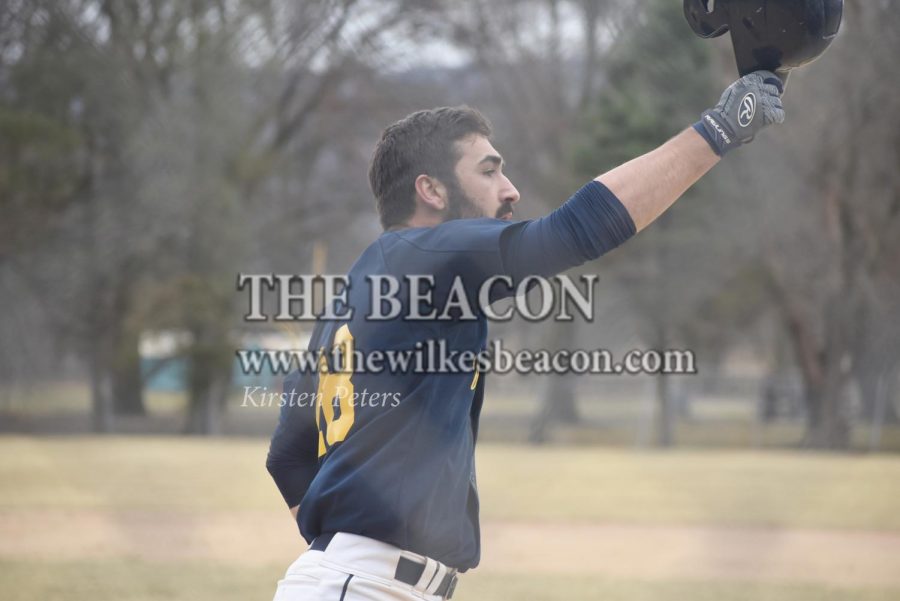 Senior Nicholas Capozzi tapping helmets after hitting a home run against Eastern, one of his two in a week where he went .545 on 11 at bats.

KINGSTON, Pa. — On the diamond, Wilkes went 2-1 on the week, claiming victories in their home opener against Muhlenberg and the first game of their  Sunday doubleheader against Eastern.

On Wednesday, March 20, the Colonels christened Artillery Park with a 15-9 victory in their first home contest.

In the slugfest, senior Nicholas Capozzi led the Colonels’ offensive efforts, finding himself on base for all five of his plate appearances. His perfect 1.000 batting average, going 3-3 with two walks, made his bat in the three-hole a guarantee for success.

In addition to crossing home plate four times  himself, Capozzi brought in two runs, contributing six runs on the day, including a two-run homer.

Despite Capozzi’s inexcusable success, he noted some of the major changes that the team has inevitably been adjusting to since falling under the leadership of new head coach Kevin Gryboski.

“Change is never easy, but it’s important to adapt to the new culture right off the bat,” explained Capozzi. “The expectation now is to win – plain and simple. It’s our job to develop and respond to that expectation by doing the little things and playing baseball the right way.”

In addition to Capozzi’s standout performace, sophomores Vincent Uzzi, Nicholas Malatesta and Nicholas Pronti carried the middle of the lineup.

Uzzi demonstrated his effectiveness as a designated hitter, going 3-3 with a sacrifice-fly and a walk, bringing in four RBIs. Malatesta found himself on base for three out of his four at bats and Pronti snagged back-to-back doubles off of Muhlenberg’s Isaac Spiegel.

On the mound, sophomore Frank Navatta earned the win for Wilkes.

After Muhlenberg earned five runs against sophomore pitcher Tony Molitoris in the first three innings of play, Navatta turned the game around with four stellar innings, only allowing two hits and keeping the Mules from crossing the plate.

Following their 15-9 victory over Muhlenberg, the Colonels kept up their momentum heading into their doubleheader with Eastern on Sunday, March 24.

In a fast-paced contest against the Eagles, the game remained scoreless for four innings before the Colonels’ offense was able to break open in the bottom of the fifth.

Senior Jack Fischer scored sophomore catcher Vincent Bobbin on a single to right field. Capozzi followed suit with a single to the right side as well, scoring Fischer and giving Wilkes the 2-0 lead.

After another scoreless top-half of the inning, Wilkes tacked on four runs to their lead in the bottom of the sixth.

A one-out solo homerun by sophomore Jonah Harder set the tone for the inning.

Two more runs scored before Patrizio got on with a single up the middle and crossed the plate on an error by the catcher. This final run for Wilkes highlighted one of Eastern’s main downfalls for the day: errors.

Leading the team with a .500 batting average for both contests against Eastern, Pronti emphasized the importance of building upon the opponent’s fundamental mistakes.

“We got a lead, we kept a lead and we capitalized on the other team’s errors. That’s what ultimately led us to a win in the first game,” said Pronti, point-blank.

However, the Colonels would not have been able to keep their lead without a stellar performace from freshman pitcher JT Hibschman, who allowed only four hits in 5.2 innings.

“We showed a lot of heart to win in both games today,” said Hibschman. “It takes a lot to put together a string of at bats, and we did that pretty well. But I think we need to do better at going at batters and staying ahead in the count.”

In the second contest against Eastern, the Colonels challenged the Eagles’ five-run lead in the bottom of the seventh, tying the game at 9 and sending the game to extra innings.

Capozzi and Pronti were at the forefront of this comeback attempt, going 2-5 and 3-5, respectively.

“We’re working to get Wilkes back on top and we have to have the mentality of wanting more in order to do so,” said Capozzi.

However, Eastern didn’t succumb to the Colonels perseverance, regaining the lead 11-9 in the top of the eighth against sophomore pitcher Andrew Indzonka, who was able to close out the first game against Eastern but who couldn’t do the same the second time around.

With an error by the catcher that scored sophomore Jared Angerman, the Colonels were back in the game, 11-10. But there simply wasn’t enough time for Wilkes, as back-to-back strikeouts closed out game two of the doubleheader and sealed the Colonels’ fate.

Wilkes finished the week 2-1 and begins their five-game week on Tuesday, March 26 with an away match against Eastern to close out the three-game series.

“I’m looking forward to the fact that we haven’t even played our best baseball yet,” said Pronti. “We’re on that path – we’re right there – we’re always knocking every game, but once we get there, we’ll be a very difficult team to beat, and that’s super exciting if we do end up making the playoffs.”