BASE: Colonels salvage series against Misericordia 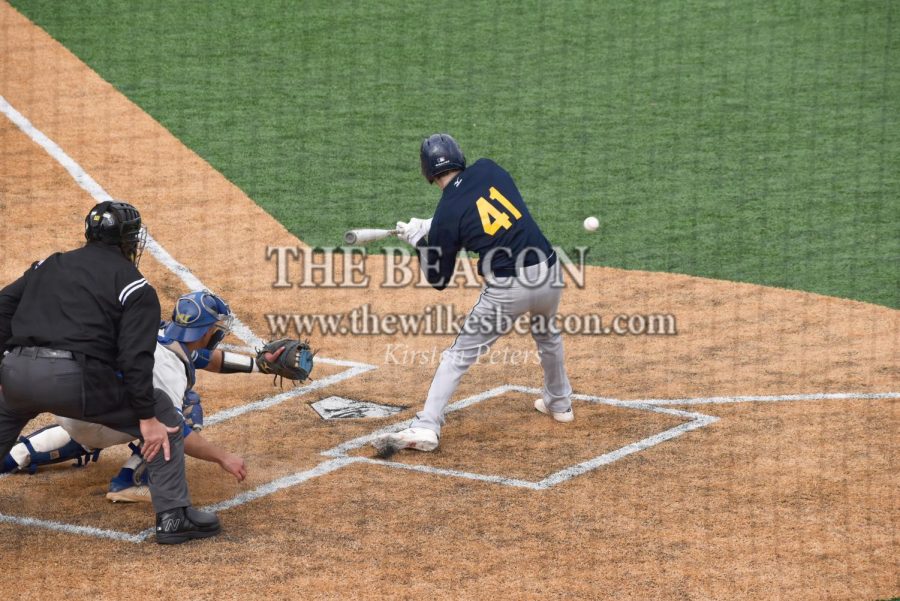 Sophomore Bryan Nifenecker proves to be instrumental at the plate, coming up clutch in each of the three games of the series and batting .375 on the weekend.

This past weekend, Wilkes baseball kicked off the start of their spring conference season.

After going 2-7 on their spring break trip to Myrtle Beach, the Colonels still appeared to be in a funk on Saturday, dropping both games of the doubleheader to Misericordia, 5-1 and 5-3. However, the Colonels were able to turn things around on Sunday, earning an 11-3 victory over the Cougars to finish the series 1-2.

In the first of their three-game series, Wilkes managed to get on the scoreboard early with a 1-0 lead in the top of the first. Senior Nicholas Capozzi was the only Colonel to tap each of the four bases, as he got on base with a single up the middle and scored when sophomore Charles Giacometti reached first base on an error to the shortshop.

With the temperature only getting lower and snow squalls cascading over the field at various points throughout the second game, the Colonels ironically started to heat up and find their groove. In the top of the third, leadoff batter sophomore Michael Patrizio doubled to right field to put a man in scoring position. Senior Jack Fischer earned the RBI in the two-spot, singling up the middle to score Patrizio and leaving the Colonels trailing 2-1 after the third.

In the top of the sixth inning, Wilkes tried to execute a comeback. Giacometti started the inning with a single to centerfield, senior Brady Wing hit a bloop single over second base just into the outfield and sophomore Nick Pronti bumped the two runners over into scoring position with a sacrific bunt. Pinch-hitter sophomore Bryan Nifenecker did his job with a single to centerfield, scoring Giacometti and Wing to tie the game 3-3.

Despite things looking up on the offensive-front for the Colonels, Misericordia was able to capitalize on Wilkes’ hit-and-miss pitching in the bottom of the sixth, scoring two runs and not relinquishing their lead in the top of the seventh to get the win.

After falling in both contests the previous day, the Colonels found themselves on the winning end during their final game of the series, earning their first MAC Freedom win of the season.

On the mound for the Cougars was senior pitcher Drake Koch, who shutdown Wilkes last season in the first game of the MAC Freedom Championship Tournament. Although Koch went eight innings with seven strikeouts and only gave up four hits and three runs in Misericordia’s dominating 16-3 performance to beat the Colonels last year, this season Wilkes appeared to have his number. The starting pitcher lasted a meer one-third of the first inning and gave up five runs  before Misericordia pulled him and put in freshman Alejandro Santiago.

Not only did the weather conditions improve on Sunday, but so did the Colonels game play, which was evident as early on as the first inning against Koch. With one out, the Colonels were able to load the bases with Fischer, Capozzi and Giacometti, with the former two being walked and the latter being hit by a pitch.

This proved to be the perfect senario for Nifenecker, who was the designated-hitter for pitcher sophomore Matt Konikow. After tying the game up with his clutch single to centerfield on the previous day, Nifenecker demonstrated his ability to deliver under high-intensity situations yet again, scoring Fischer on another single to centerfield.

Wing followed suit, singling down the right field line and scoring Capozzi. With Wilkes’ offense making contact, Pronti put the icing on the cake with a three-run triple to right-centerfield, clearing the bases of his teammates and giving the Colonels the 5-0 lead in the first inning.

After the Cougars closed in on the Colonels lead over the course of three innings, Wilkes regained their momentum, tacking on three runs in the fifth inning. Junior Matt Reinert, who earned the Colonels top spot offensively with a .500 batting average on 10 at bats and added a walk, had a two-run single to centerfield to score Wing and Pronti. Patrizio singled to third base to score sophomore Vinny Bobbin to close out the inning.

In the sixth, Wilkes continued to rake with a lead-off triple to centerfield off of Giacometti’s bat. Nifenecker did his job once again this weekend, scoring Giacometti on a productive ground-out to the shortshop. Pronti, who followed Reinert on the leaderboard with a .444 batting average, a walk and a sacrific bunt, singled to left field and scored on a Reinert single to centerfield.

The Colonels closed out the scoring in the bottom of the eighth when Bobbin scored on Fischer’s sacrifice fly to right field, demonstrating their competitiveness with the 11-3 win they were able to snag from Misericordia.

On the mound, freshman Gage Coudriet was able stifle his opponents’ bats. Being that Misericordia was pre-season ranked as third in the nation, this feat was impressive for a freshman who proved to be a calming influence despite the inevitable jitters he faced in his first appearance in a conference game.

The relief pitcher did exactly what his title entails – provided relief. Coudriet lasted five innings with one strikout and gave up three hits and one run to lead his team to victory. Under his command, Misericordia suffered weak contact at the plate and their base runners were held to where they were. Coudriet’s calm, cool and collected nature served him well in earning his first conference victory of his collegiate career.

Wilkes will go on to face Muhlenberg College in a non-conference matchup on Wednesday, Mar. 20 at 3:30 p.m. in their home opener at Artillery Park.