WIH: Joly has season-high 66 saves in Friday loss to Utica 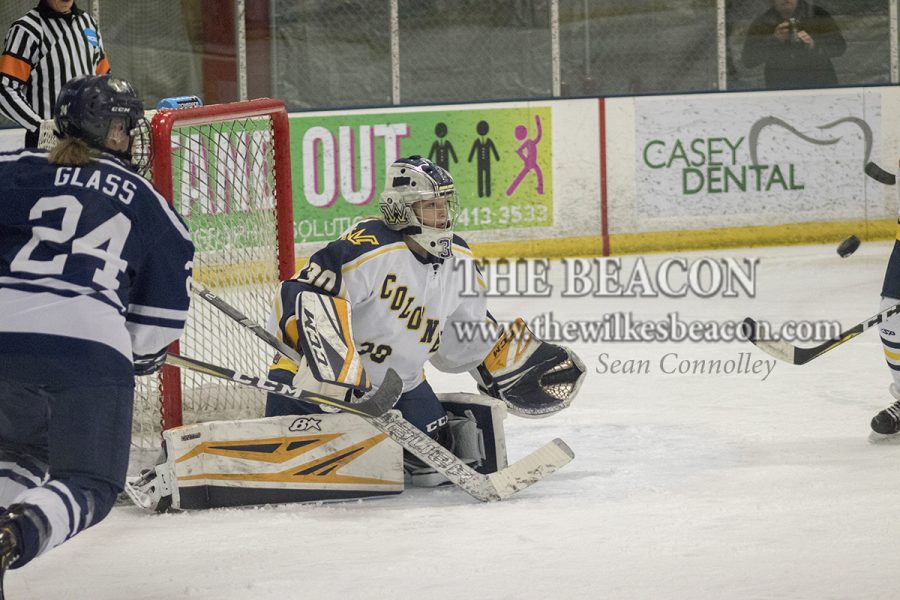 Freshman Ally Joly made a record 66 saves on Friday and followed it up with 63 saves on Saturday in back-to-back contests against Utica.

WILKES-BARRE, Pa. — The Wilkes University women’s ice hockey team took on the Utica College Pioneers Friday night at the Toyota Sportsplex. This was the last home game of the season for the Colonels, and they suffered an 8-0 loss.

A few big things happened for the Colonels in the last week. They recorded their first point in a 1-1 tie against Lebanon Valley on Feb. 6.

“We were really proud to get that first point. We worked really hard for that,” said senior defender Laura Brezinski in regard to the point recorded during Wilkes’ prior home game.

After that game, freshman Ally Joly was named the United Collegiate Hockey Conference (UCHC) Goaltender of the Week, after stopping 44 out of 45 shots in the Feb. 6 game and registering a .978 save percentage.

“It felt like a team award rather than just an individual award,” remarked Joly.

Prior to the start of this Friday’s game, Wilkes honored Brezinski, their lone senior. Brezinski appeared in all of the Colonels games this season, registering a team-high 34 blocked shots and two assists.

Friday’s game was the first matchup between the Colonels and Pioneers this season. Going into the game, Utica’s record was 14-8-1 whereas Wilkes’ record was 0-13-1.

The Colonels came out with a lot of momentum in the first period. Joly made a few big saves early on, but the score remained 0-0 for the first 15 minutes of play.

With 4:37 left in the period, Utica’s Olivia Hirschy and Wilkes’ freshman forward Shauna Tubbs received two minutes each for roughing. This gave the Colonels and Pioneers two minutes of four-on-four hockey.

Ultimately, this helped the Pioneers, giving them their first goal of the game when Elizabeth Dohner scored, with assists by Lexi Stanisewski and Noelle Capriglione. The period ended with the Colonels trailing 1-0.

At the start of the second period, there was a strong effort shown by both teams. However, Dohner scored her second goal of the game, increasing the Pioneer’s lead to 2-0.

This gave Utica another opportunity to score – and they did. With 11:38 left, Dohner got her third goal of the game with an assist by Georgia Santullo, securing a hat trick for Dohner.

With a little over 10 minutes left, another goal was recorded by Dohner, who proved to be able to poke a hole in the Colonels’ defense, to bring the score to 4-0.

With about nine minutes to play, Utica’s Santullo recorded her first goal of the game with an assist by Stanisewski, giving them the 5-0 lead.

With 1:35 remaining in the second period, Utica’s Nicole Johnson got a goal with an assist by Kyra Borsoi, making it 6-0. The period ended with the Colonels trailing by six points.

Before the start of the third period, Wilkes’ head coach Earl Utter urged his players to “try to take away time and space” from Utica. He believes that these were two of their downfalls in the first two periods of the game.

The score remained 6-0 for about the first half of the third period. Then, at 10:27 into period, Brezinski received a two-minute penalty for roughing, giving Utica a power play.

Utica capitalized on this, with Katrina Cornick scoring to bring the Pioneers lead up to 7-0 off of an assist from Kayla Dion.

With 3:45 remaining in the game, Utica’s Olivia Hirschy scored with an assist from Ricki Haab, giving them an eight-point lead. The game ended with an 8-0 win for Utica, which improved their record to 15-8-1.

After facing Utica on Feb. 15, the Colonels travelled to Utica for their last contest of the season the following day.

Noting their previous contest, Utter asked his team to do a “better job of taking away time and space, as well as managing the puck.”

The Colonels proved to do just that, as they were able to hold the Pioneers to a 3-0 victory during Wilkes’ final game of their inaugural ice hockey season on Saturday.