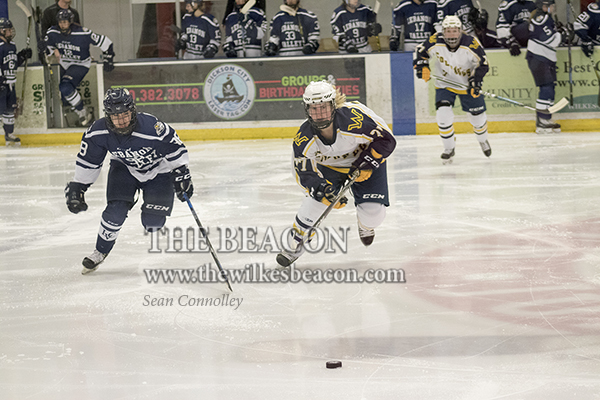 The women’s ice hockey team led 1-0 for the majority of three periods in their contest against Lebanon Valley, ultimately tying 1-1 following overtime.

The last time these teams played each other was Jan. 18, when the Dutchmen came out on top with a 4-1 victory at the Hershey Park Arena in Hershey, Pa.

In their time off, Wilkes head coach Earl Utter noted that the Colonels have been working on some skills and have actually shortened some of their practices, allowing them to just go out and play some hockey.

This proved to work for the Colonels, as they maintained a lead for just about the entirety of the game.

The game started out relatively fast paced. There weren’t many shots on goal for Wilkes during the first period. The Dutchmen outshot the Colonels 11-5.

With 2:56 to go in the first period, Wilkes’ Shauna Tubbs scored the first goal of the game with an assist from Kendall Castro and took the 1-0 lead.

After that goal, there was a two-minute hooking penalty on Wilkes’ Laura Brzezinski. Lebanon Valley was unable to capitalize on the penalty, leaving the Colonels with the 1-0 lead at the end of the first period.

The second period also saw two other penalties on Wilkes University. There was a two-minute checking penalty on Brezinski with 15:36 remaining. Shauna Tubbs also received a tripping penalty with 5:31 remaining.

However, Lebanon Valley was unable to score on the power plays. During this period, the Colonels were playing well on the penalty kill. At the end of the second period, the game was still 1-0 in favor of the Colonels.

Prior to the third period, Utter reminded the players of their success thus far in the game, urging his players to “continue to do the things they’re doing.”

Considering that this was the first time the Colonels were able to enter the third period with the lead this season, Utter was thrilled with his team’s play.

During the third period, there was a penalty on Lebanon Valley’s Chloe Glass as well as two penalties on Wilkes’ Laurenne Fraser. Despite the power plays, the score remained 1-0.

With 1:12 left to go in the game, Lebanon Valley decided to pull their goalie to get an extra offensive player on the ice.

Wilkes goalie Ally Joly noted how she was hoping the Dutchmen wouldn’t score, but the Colonels found themselves in their first bout of six on five hockey, which they had never encountered prior to this game.

“I was thinking, I don’t want them to score, but it’s what happened,” said Joly. “This was our first time ever playing six on five with them having an empty net, so it was just a bad bounce and it went in, but that’s the game.”

Lebanon Valley pulling their goalie ultimately helped them, and with 0:17 left in the game the Dutchmen’s Olivia Cindrich got a goal assisted by Amy Templeton to tie the score at one.

At the end of regulation, the game was still tied, causing them to head into a five minute five-on-five overtime period. Neither team scored during overtime.

Due to this, the game resulted in a 1-1 tie, earning the Colonels their first point of the season and improving their record.

The Colonels have two games remaining, back-to-back contests against Utica College. The Colonels will face the Pioneers in their last home game of the season on Friday, Feb. 15 at 5:00 p.m. at the Toyota Sportsplex.

“We’re going to come back Friday, get back at it and go hard,” said Tubbs on the Colonels final matchups of the season.