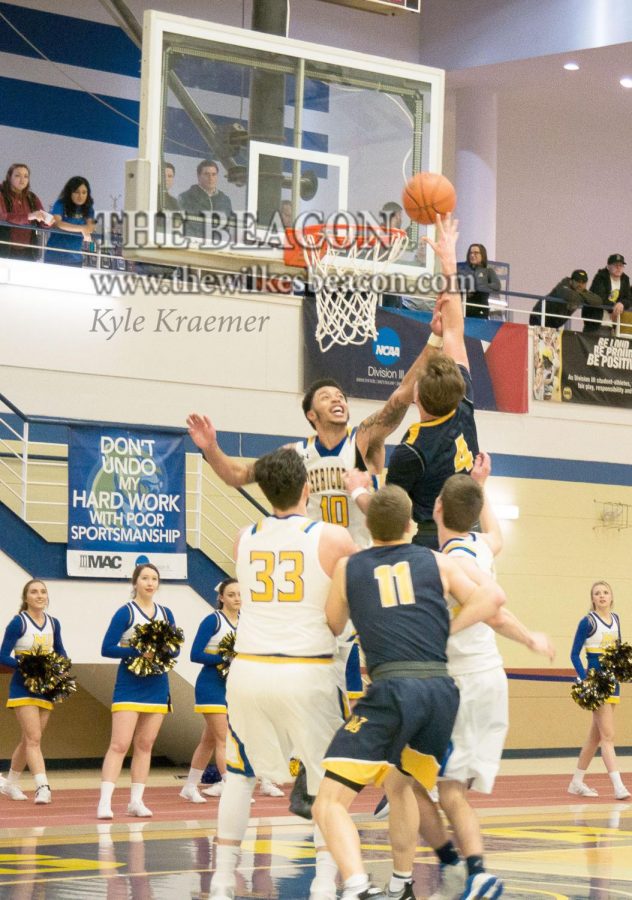 Senior Tommy Bowen secures the basket under the net for Wilkes.

DALLAS, Pa. — On Wednesday night, Wilkes men’s basketball was able to take the next step in locking a playoff spot with a 69-54 win over Misericordia.

“This was a big win for us because of how good Misericordia has been,” said Wilkes head coach Izzi Metz. “The five years I have been here, they have been the most consistent team.”

The game saw a match-up between two of the MAC Freedom’s best players: Jason Kenny  on offense and Marcus Robinson on defense.

The first half saw the two go at it, but the second differed. Kenny found himself sitting the bench, shooting just 2-12 from the field.

Both teams were hot from the start, with a three-pointer from Misericordia’s Alec Rodway kicking off the scoring.

The Cougars had some early trouble with the officials, as Kenny, reigning conference player of the year, argued a no-foul-call. His plea gave him a technical foul, helping the Colonels build a lead.

Misericordia was led by Justin Iton with 12 points, Rodway was behind him with eight and Kenny had just four. The Cougars failed to get any other players on the scoresheet in the half. As a team, the Cougars shot 28 percent.

Wilkes was able to gain a comfortable first half lead with nine points from Mark Mullins and eight points from Tommy Bowen. Wilkes shot 44 percent for the half.

Behind their post players, Wilkes was able to take a 32-24 lead going into halftime.

Wilkes came out firing in the second half, and Misericordia’s shooting woes continued. The Colonels built a 21-point lead behind solid play from Mullins, Bowen and Rob Pecorelli.

“We try to just take our best shots,” Mullins said. “We have a lot of guys who can score. Between Pecorelli, Robinson, Bowen and both Jack Bova and Landon Henry off the bench, we have plenty of scoring depth.”

The Cougars made things interesting with 12 minutes remaining, as head coach Will Chandler decided to pull his starters to get a spark from the bench.

Ryan Coyle, Sean Gorman, Brendan Leonard and Tyrell Mann came on the floor, and they quickly cut the deficit down to as low as 11 points.

“They brought in some young guys and we knew they would make a few shots,” Robinson said. “We had a veteran group out there, and we knew what we needed to do.”

Ultimately, the Colonels were able to hold off the Cougars’ attack, with Misericordia shooting just over 31 percent from the field.

“We played good defense, but some of them were missed shots,” Metz said. “I do think some of it was our defense, but we saw the way they could get the ball inside and we had to take that away if we wanted to have a chance.”

Mullins finished with a team-high 20 points, followed by Robinson who had 15. Bowen finished with 13 points and 11 rebounds to record a double-double.

On the women’s side of the court, the Wilkes women’s basketball team couldn’t build off of a solid first half, as they lost to local rival Misericordia, 60-34.

The Colonels entered the game with a 7-14 (3-7) record while Misericordia came in at 18-3 (7-3). After suffering a loss last week, the Cougars lost their spot in the national rankings.

The first half was a lot more competitive than the teams’ records would suggest. Wilkes went shot-for-shot with Misericordia throughout the whole first half, heading into halftime only trailing by one point, 26-25.

Senior Ashley Caster was crucial to the Colonels game play, as she led both teams with 11 points in the first half.

Japriya Carroll led Misericordia with seven points, followed by three other Cougars who had five points heading into the break.

“We were looking to get some steals out of our man defense,” said Misericordia head coach Jason Rhine. “We ended up coming away with them in more of a zone set up. It helped spark the team and we started making shots.”

The fourth quarter started with the Cougars staying hot. Paige Wampole found her way to the boards. Misericordia grabbed 11 points in the first five minutes, while Wilkes failed to score a point.

Wilkes finally scored their first points of the fourth quarter with 3:30 remaining on the clock. Freshman Jordan Harrison put home a layup and sophomore Kristie Najdek hit a long two-pointer, resulting in all of the Colonels fourth quarter points to finish the contest.