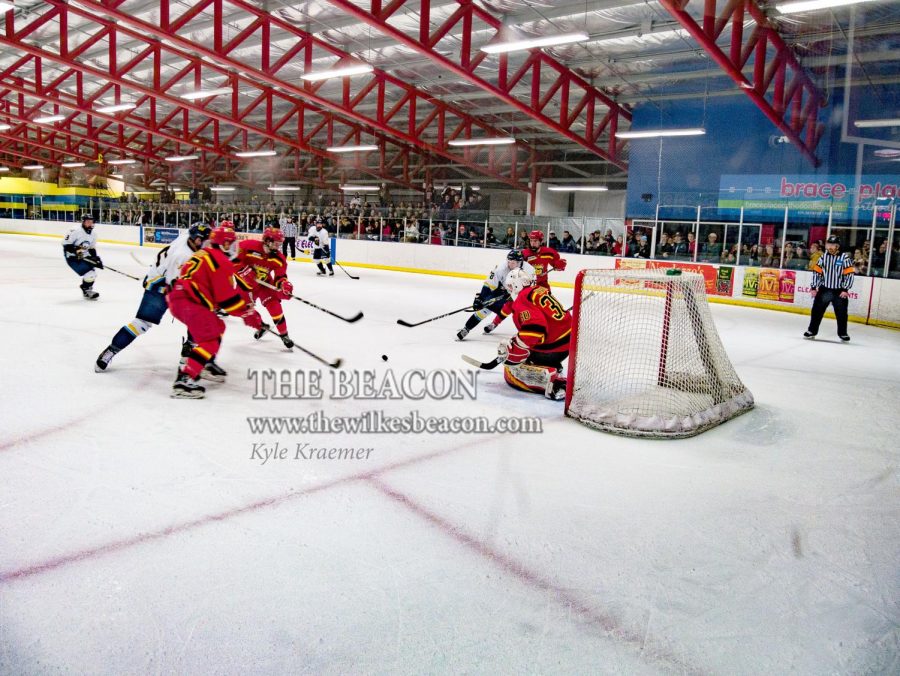 The Colonels score three goals in the final period of play to solidify their 4-0 victory over King’s College on Jan. 31.

WILKES-BARRE, Pa. — The Wilkes University men’s ice hockey team bounced back Thursday night after a close loss to Stevenson on Jan. 26. The Colonels improved their record to 14-5-1 overall and 10-3-1 in the conference following a shutout victory 4-0 against crosstown rival King’s College.

The Colonels did not start the game on the right track, as Devon Schell got a two minute penalty for cross checking less than thirty seconds into the game. Credit due to coach Brett Riley and Tyler Heinze for emphasizing the importance of the Colonels penalty kill, as the penalty kill unit for the Colonels shut down the King’s College power play.

After this power play, the Colonels got on the right track and began putting shots on net.

Despite the barrage of shots for the Colonels, they were still unable to find the back of the net at the midway point in the first period.

The Colonels tallied more shots than King’s (10-3) by the end of the first period, but play was back-and-forth between the teams challenging each other’s goalies.

The second period proved to be more of what the fans expected from the Colonels – a fast paced, physical, goal scoring team.

After adjusting their game play and making some improvements during the second period, the Colonels were able to get on the board.

“I think it was just respecting our game plan and keeping on working,” said Brendan Logan. “We stuck to the system and kept pucks on net and pucks started to fall into the net for us.”

It took nearly the first ten minutes of the second period for the Colonels to break the scoreless tie and pick apart King’s goalie Brandon Daigle.

Wilkes kept their persistence on the puck in the King’s zone and finally a centered shot from Logan went high and left over the glove hand of Daigle, finding the back of the net and securing Wilkes’ first goal of the game.

The momentum continued to stay on the Colonels side following the goal, but Daigle and the King’s defense held Wilkes to only a one goal advantage going into the third period.

Since the Colonels had over a minute and a half left on a power play they received late in the second period, Wilkes was able to maintain their momentum and keep consistent pressure on King’s defense, forcing Daigle to make saves.

Despite not scoring on the power play, Wilkes opened up the third period scoring with a beautiful centering pass from Donald Flynn to Tyson Araujo, who was able to tap the puck beyond Daigle and extend the Colonels lead to 2-0.

With the 2-0 deficit, King’s continued to dig themselves into a deeper hole, as they got several costly penalties in the third period. This kept the Colonels on the power play and kept King’s on their heels, wearing out their penalty killers and defense.

“We’ve been preaching wearing teams down,” said head coach Brett Riley. “When you get pucks to the net and you come wave after wave, it may not work right away, but they stayed disciplined and stayed committed to the game plan. We knew if we could wear their defense down and get in, eventually pucks would go our way.”

This proved to be costly to King’s, as Tyler Barrow extended the lead for the Colonels 3-0 at the halfway point in the third period.

With this goal, Barrow put up his 17th of the season, just two goals shy of fellow teammate Flynn, who is the leading scorer for Wilkes.

King’s had a few opportunities later in the third period, but goalie Brandon Gordon acted as a brick wall and did not let pucks get by into the back of the net.

The Colonels, however, scored on Phil Erickson’s shorthanded goal with less than a minute left in the game.

Erickson skated behind the net and had Daigle on the ice and out of position, which made it easy for Erickson to bury the puck in the back of the net.

“When we do the right things defensively, we are going to have those offensive chances because teams take the work off in their own zone when they’re on the power play,” explained Erickson. “That’s when we step in there and be aggressive and give ourselves a chance.”

Erickson’s late goal gave the Colonels a 4-0 lead with less than a minute remaining in the game.

Wilkes was able to protect the shutout and deny King’s from scoring any goals in the final fifty seconds of the game, securing their second shutout victory against King’s College, as they beat them 3-0 in November.

With this victory, Gordon earned another shutout on the season.

“I think, just mentally, I’ve been staying strong for 60 minutes,” said Gordon. “The team has playing really well in front of me defensively and blocking shots.”

With this win over King’s College, the Colonels hold onto first place in the UCHC standings. Behind the Colonels is Elmira and Utica.

The Colonels will face Utica on the road for their final game of the season on Feb. 16.

But, as most of the men’s ice hockey players say, they take it one game at a time.

The next two games for the Colonels are this upcoming weekend, as they host UCHC competitors Neumann University on Feb. 8 at 5:00 p.m. and Manhattanville College on Feb. 9 at 5:00 p.m.